India’s north-western region is widely considered to be the country’s granary, with states such as Punjab and Haryana accounting for a large share of the country’s agricultural output and farm incomes. But farming in both these regions is increasingly becoming unsustainable, owing to depleting groundwater levels. The situation is equally precarious in the south-eastern parts of the country. Both these regions account for most of India’s groundwater-stressed blocks, as the chart below shows. 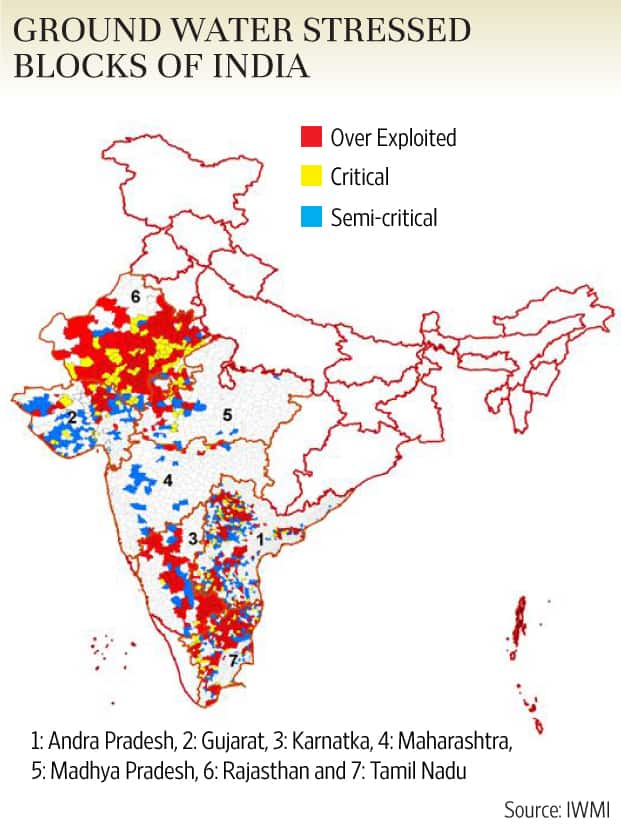 The dependence of irrigation on groundwater increased with the onset of the so-called Green Revolution, which depended on intensive use of inputs such as water and fertilizers to boost farm production. Rather than extending surface water irrigation to unirrigated regions, policymakers began providing incentives for groundwater extraction.

Private groundwater irrigation was facilitated by extending credit and subsidies for irrigation equipment. However, the centrepiece of government policy has been the massive subsidy provided on electricity supply. Low power tariffs led to excessive water usage, leading to a sharp fall in water tables. The rush to grow cash crops in recent years has only exacerbated the crisis.

Falling water tables prompted the use of expensive deep-water equipment, which added to the debt burden of farmers, and worsened the crisis.

The historical inequities in electricity supply to different regions have also skewed cropping patterns. Being relatively water-abundant, the east is more suited to growth of water-intensive crops such as sugarcane and paddy. However, scant power has ensured that such crops, which require irrigation, have hardly found a place in their natural habitat. On the other hand, power freebies in the initial years in the south and west India—regions with naturally low water tables—encouraged sugarcane and paddy cultivation, sapping these regions of the already scant groundwater.

Thus, erratic electricity in the east and falling groundwater table in the west and south have emerged as the greatest threat to the future of crop production in India. In recent years, the power situation even in the west, north and south have been deteriorating.

In recent years, farmers have been facing crippling power cuts even in northern and southern states. The inability to rationalize rural power tariffs and growing losses of state electricity boards forced many state governments to cut power supply to rural areas. After peaking in 1995, the share of electricity consumed by the agricultural sector has fallen sharply.

In states like Karnataka and Punjab, farmers receive a fraction of the power they did earlier. Since most of the deep-water equipment needs electricity to run, power shortage has stalled growth in irrigation. Tushaar Shah, senior fellow at International Water Management Institute (IWMI), said that the drastic cutbacks had happened in response to the fractured financial condition of state electricity utilities. Since politicians were unwilling to charge farmers, reducing supply was deemed to be the only option. Even though many farmers are now willing to pay for their electricity, the situation hasn’t improved much.

Balancing the opposing needs of irrigation and groundwater conservation remains a tough challenge for policymakers.

In a recent article, Shah, Neha Durga and Shilp Verma of IWMI have proposed the use of solar power generators in farms to solve both water and power crises in rural India. The danger of groundwater depletion can be addressed if farmers are allowed to generate revenues by selling excess solar power to state utilities, instead of using it to extract groundwater, according to Shah.