The journey towards energy savings begins from home

Despite growth in residential use of electricity, India's average monthly household consumption is low, at 90kWh

India is poised to witness a number of transitions: in urbanization, demographics, infrastructure and energy systems. Indian cities will be home to one of the largest historical influxes of people over the next few decades. It is estimated that two-thirds of the buildings that will exist in 2030 have not been built yet. Managing these transitions is a challenge, complicated by the need to address their immense energy implications. One area where the energy growth is stark is rather close to home.

Residential electricity use has risen 50 times in the past four decades and accounts for about a quarter of India’s total electricity consumption. There are plans of providing reliable electricity to all by 2019, and as income levels increase, more people, most of whom are starting from a low base of development, will require modern fuels and appliances for a better quality of life. The sheer scale of this growth is unprecedented, even if the trend itself is intuitive. What is at stake from this rising power use in homes? What do we know about how we use our electricity? 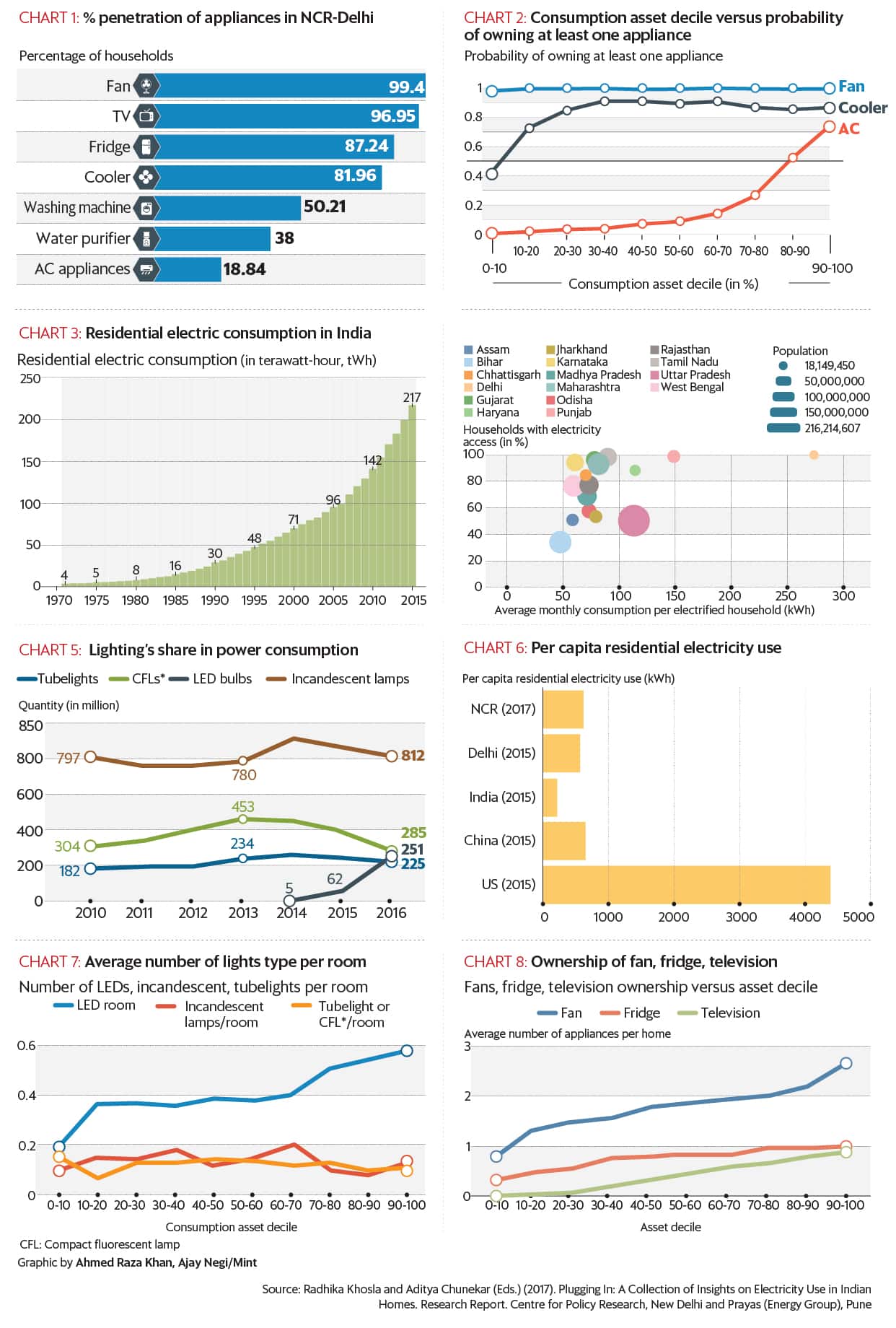 Despite the growth in residential electricity use, India’s average monthly household consumption is low, at about 90kWh—enough to run four tube-lights, four ceiling fans, a TV, a small refrigerator and small kitchen appliances. This is three-fourths of the average monthly household consumption in China, a 10th of that in the US and a third of the world average. While residential electricity use has risen in all states, homes across India don’t mirror each other in their consumption. Bihar, Jharkhand and Karnataka consume the least, on an average. Maharashtra, Gujarat and Tamil Nadu, with higher rates of electrification, consume 80-90 units per month per household on an average. Homes in Punjab and Haryana consume much more.

The outlier is Delhi, where homes consume more electricity than any other Indian state or city. An electrified household in Delhi consumes 250-270 units per month on an average—approximately the same as an electrified home in Germany. Further, Delhi is part of the larger National Capital Region (NCR), and on a per-person basis, the NCR resident consumes 3.5 times the household electricity of the Indian average. The variation within India of average per-capita residential electricity is higher between NCR and India than between India and China.

Nearly 97% of urban households own a ceiling fan and 88% own a TV. The literature suggests TV viewing has become the most important information and entertainment activity for urbanizing families. The next purchase is the fridge. In wealthier households, the fan, TV and fridge are followed by washing machines and water purifiers. On cooling, while almost every NCR home owns a fan and an air cooler, only the top decile, at most, have an AC. An AC has a load of about 1,500W compared with a 75W fan. The increased cooling load will have significant and likely disruptive systemic effects on the electricity grid.

The yet-to-be bought appliances offer a potential advantage. Since the bulk of housing and appliances are yet to be invested in, the type of purchase made, the efficiency with which they expend energy and the features of the construction undertaken will condition electricity demand. This is salient to affordable housing as well—the targeted 20 million affordable homes by 2022 imply that several appliances will be bought for the first time, and are likely to persist for years.

The opportunity from yet-to-be bought appliances and homes, however, is only as useful as their initial purchasing decisions. It will turn on the determination by which energy efficiency standards are pursued for the most widespread appliances, most of which are not yet star rated. The manner in which appliances are used to support lifestyle choices is also relevant. These interventions are neither easy nor automatic, especially because consumption is often embedded in a complex network of social institutions and behaviours. At the policy level, too, taking on such a perspective is unconventional, as it moves away from the dominant supply-thinking on the important, yet partial, questions of integrating renewables and coal. Yet, the fact is the changing nature of India’s energy sector cannot be managed unless attention is turned to how energy is going to be used. Our homes offer an opportunity to shape this pattern of consumption, and to move towards a future that prevents long-term energy and carbon lock-in.

Radhika Khosla is the Research Director at the Oxford India Centre for Sustainable Development, and senior researcher at the Smith School for Enterprise and Environment, at the University of Oxford, and Aditya Chunekar is a fellow at Prayas (Energy Group), Pune.