Walking the art talk with the Kallats

Walking the art talk with the Kallats

I am trailing artist-couple Jitish Kallat and Reena Saini Kallat through the white-cubed maze that is the India Art Fair in New Delhi. By the time you read this, the fair would have finished. My goal is to give art-loving readers in other cities a “Take on Art" through the prism of this event. There are many options open to me. Should I go to every gallery and ask for the name of one upcoming artist they are considering? I don’t think I’ll get an honest, agenda-less answer.

There is the scene surrounding the fair, the after-parties, the things people said. Cultural theorist Ranjit Hoskote at a speaker’s forum, describing how he approached the India pavilion at the 2011 Venice Biennale “through the rhetorical trope of the non-sequitor". Say what? An English-accented lady in the audience accusing Sophie Duplaix, the curator of the recent Paris-Delhi-Bombay... Through the Eyes of Indian and French Artists show (from 25 May-19 September) at the Centre Pompidou, Paris, of curating a condescending “colonialist show with an orientalist’s perspective". I don’t know these words so I cannot decode them for you. A simpler response came from an auction house representative who called the Centre Pompidou show “rubbish". A lady performance artiste at the opening party held at The Park, New Delhi, to a male academic (name changed), “Raman, I’ve been told that dancing with you is better than having sex." Collectors Rajiv Savara and Harsh Goenka at the VIP preview, eyeing their next acquisitions. Artist Sudarshan Shetty having a Chinese lunch in the backroom—his work in front was priced at Rs64 lakh. Subodh Gupta glad-handing a contingent of Pakistani students at the entrance. Hoarse gallerists continually answering questions: “We have been having more conversations with journalists than collectors and I am not sure that is a good sign," said an exhibitor at White Cube’s booth. The freezing terrace of the blueFROG, The Kila, where Khoj, the acclaimed artists’ association, held its live performance shows. A lady walking through a performance piece asking a performer for a cigarette before doing a double take. The alcohol lubricating every event...and I still hadn’t come up with an angle for this column. I ran into Jitish Kallat, 37, at Aman New Delhi, where Outset, a philanthropic arts organization, had breakfast forums. He was wearing what appeared to be a smartly cut blue khadi jacket, which was my initial reason for approaching him: an artist I admired who also shared my love for Indian textiles. The jacket, it turned out, was from fashion boutique Bombay Electric and I am not sure it was khadi. But by then I had already popped the question and he had accepted: Could I trail him through the fair and view it through his eyes? Kallat liked the idea, and when I saw his wife, Reena Saini Kallat, 38, nearby, I asked if they could do it together. So it came to be that we walked through the fair to a quiet table in the back. It took me 10 minutes to get them to open up.

Jitish and Reena are charming and polite—to me and to each other. They don’t interrupt and listen intently to each other as they describe their 18-year-old relationship, seven-year-old son and the trappings of fame and wealth that have come to them. Like every artist, they claim to be untouched by the market. “I don’t know that I was any ‘purer’ as a poor student artist than I am now," says Jitish. “You have to maintain that level of uncertainty and probing that one had in arts school; and be aware of the slippery grounds that you walk on."

“We were completely comfortable with the idea of a humble living when we got married," says Reena. “It was a privilege to be an artist, not the privileges in the usual sense, but to engage with the world in a different way. No artist cares for anything more than the trajectory of work that they leave behind." 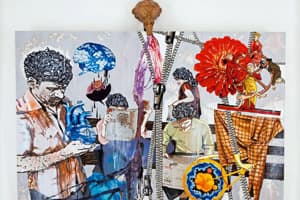 14 Lives, an acrylic on canvas and bronze by Jitish at the India Art Fair held in Delhi in January. Photo: Courtesy Arndt Berlin.

“When you make an object, you stand the risk of that object speaking to an audience of one: you," says Jitish. “Visual arts isn’t a populist medium to begin with. I would hope that through events like the art fair, various constituencies would come together to rejuvenate our museums, reincarnate our art schools from their current state of coma, establish private museums and build institutions."

We talk about their working relationship, about whether they discuss their works during the creation. “I am a bit more chatty in the sequence of creation," says Jitish.

Just when I think that Reena is proper and polite, she gives me pause. “He might discuss every crappy idea with me while I am more selective about what I discuss with him," she says. The couple burst out laughing.

Shoba Narayan has a lot of crappy ideas and she is not selective about who she discusses them with. Disclosure: she was a guest of the India Art Fair. Write to her at thegoodlife@livemint.com