"storyDirectUrl"
OPEN APP
Home / Opinion / What is behind high inequality in Kerala?

What is behind high inequality in Kerala?

Mumbai: Kerala has been the poster-child for almost everything that is socially desirable. From literacy to sex-ratio to life expectancy, Kerala generally fares the best in India. However, there is one gaping hole in the Kerala story—the state also ranks the highest in terms of income inequality. 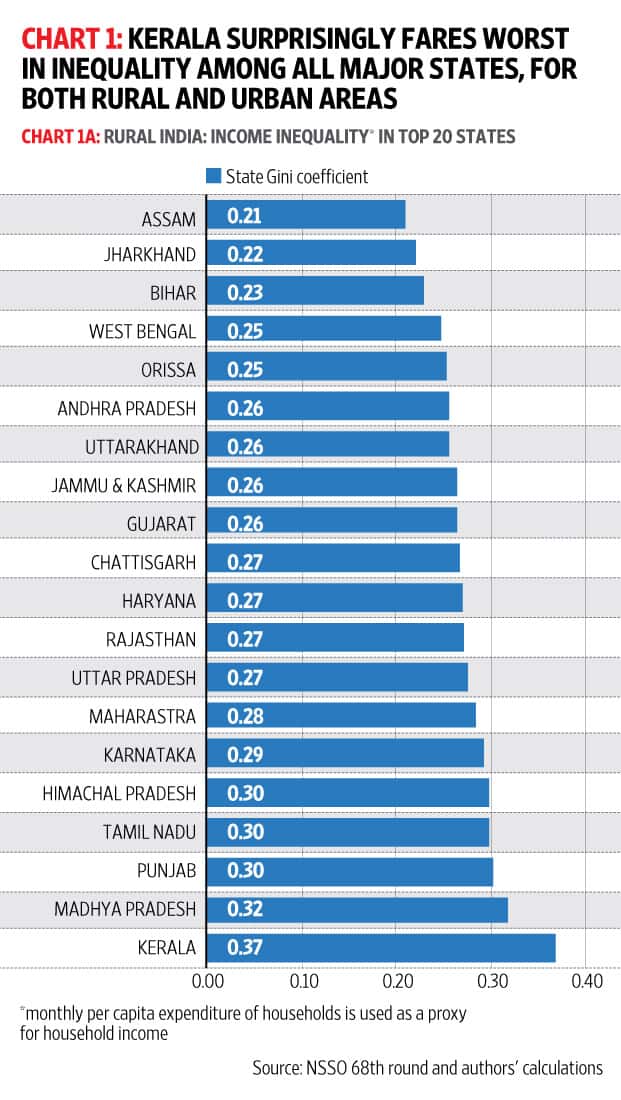 Mint’s analysis has been done using consumption data and is consistent with the findings of the erstwhile Planning Commission. However, the actual situation might be less worrisome. The high inequality numbers are just a reflection of the extremely high incomes of the rich in Kerala. Despite its higher inequality, Kerala still reports much lower poverty than most other states. The bottomline: people in Kerala are relatively better-off in real terms compared to many of the other seemingly less unequal states.

For instance, look at the income (proxied here by mean per capita expenditure) distribution in Kerala versus Gujarat, a state against which it is often pitted against especially in matters related to economic and social development. It shows that higher inequality for Kerala is not driven by lower income percentiles, but by the prosperity of the super-rich. As chart 2 shows, Kerala and Gujarat’s income starts to diverge only for the super-rich. The broad trend remains same even when adjusted for price differentials across states. What is behind the very high incomes of the super-rich in Kerala?

Remittances might have a large role to play, says Upasak Das, assistant professor at the Centre for Development Studies, Thiruvanathapuram. For example, according to a 2015 working paper by Honorary Professor K.C. Zachariah and Professor S. Irudaya Rajan, despite Kerala accounting for a large chunk of India’s remittances, “less than 17% of the total households (in Kerala) had received any remittances in 2014; a very vast majority of the Kerala households are not direct beneficiaries of the vast amount that comes to the state as worker’s remittances".

The spending pattern for the bottom 10% of households in both Kerala and Gujarat shows that expenditure on food is lower for Kerala. Now, Engel’s Law states that poorer households are likely to spend a higher proportion on food. Also, a poorer household will spend less on discretionary items like consumer durables (like TV) or entertainment. 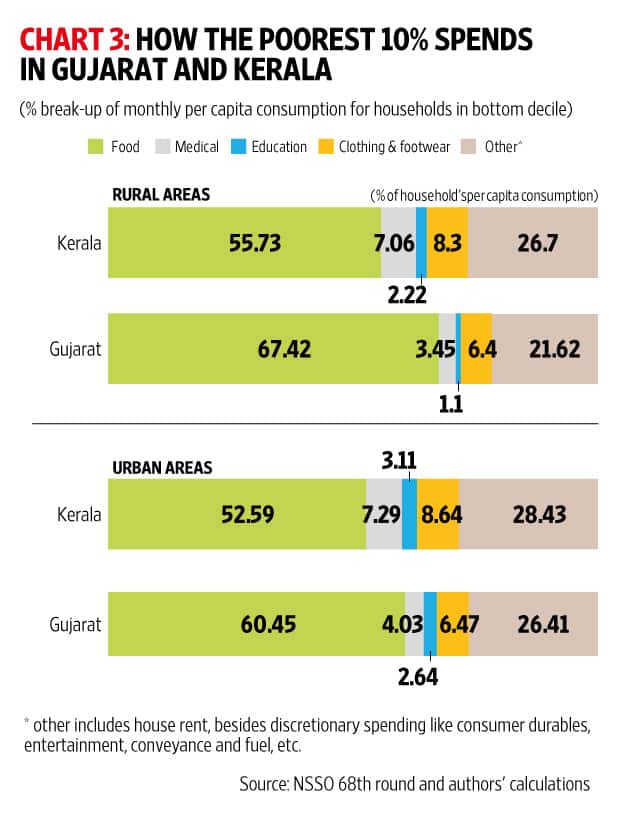 It is also supported by the fact that Kerala reports lower poverty than Gujarat despite a similar pattern in reported per capita consumption, for at least the lower percentiles. Estimates of the 2013 Tendulkar Committee Report on poverty also suggest that percentages of population below poverty line in rural and urban Kerala are 9.14% and 4.97% respectively as against 21.54% and 10.14% for Gujarat.

Nevertheless, it is worth noting that over the long run, higher levels of income inequality may distort the social fabric of a society and can have adverse economic consequences.

Udayan Rathore is Assistant Professor, Economics at Lady Shri Ram College for Women in Delhi and Tadit Kundu is a data journalist at Mint.