Why growth has not hit corruption hard in India

There is a strong relationship between income and corruption, but strong institutions and supporting infrastructure are also necessary

India has been the fastest-growing major economy in the world for the most part of the last few years. Foreign direct investment (FDI) in India increased 2.5 times from $24.3 billion in 2013-14 to $60.1 billion in 2016-17. However, economic progress has not seen a commensurate reduction in corruption.

In a survey released in March by Transparency International, among 16 countries of the Asia-Pacific region, India has the highest bribery rate of 69%. The report also mentioned that 41% people in India thought that the level of corruption had increased in the last year. Similarly, the CMS India Corruption Study, using survey data for the period October-November 2016 for 20 major states in India, found that the highest percentage of households reported experiencing corruption in police (34%) followed by land/housing (24%), judicial services (18%) and tax (15%) related public services.

Corruption is a multifaceted phenomenon which makes it difficult to have a single definition. There are several schools of thought on the degree of impact of corruption, but there is a consensus that corruption stifles growth, hampers development, worsens income inequality, and affects poor people the most. The World Bank measures corruption on a scale of -2.5 to +2.5 with higher index value meaning lower corruption. 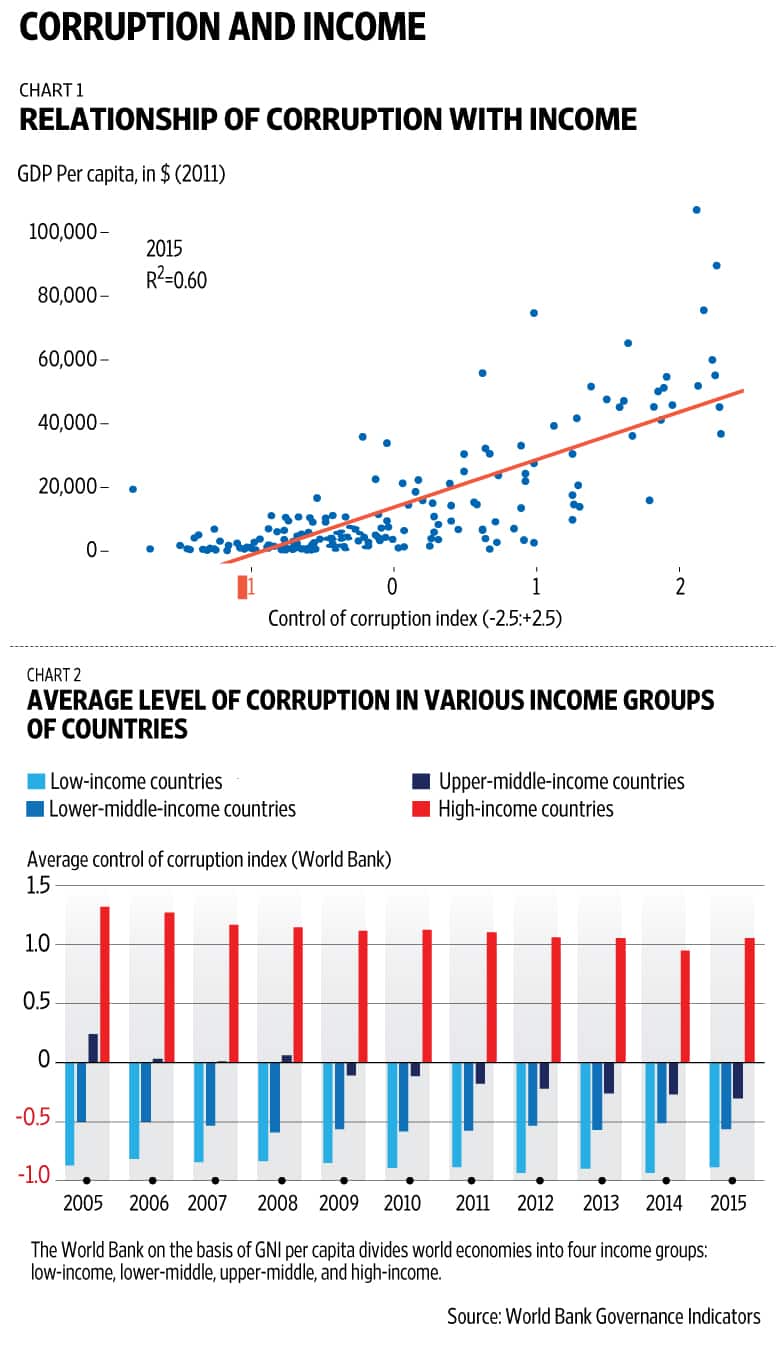 For example, Equatorial Guinea, which is a high-income economy, is still among the most corrupt. It is often called “an almost perfect kleptocracy", with the Open Society Foundations once referring to its corruption as “unparalleled in its brazenness". This is because the economy—one which is chiefly natural resources-based—is run by a few powerful individuals with hardly any institutions to ensure accountability and transparency. The absence of institutions provides an opportunity for government officials and politicians to indulge in moneymaking, either in collusion or individually.

A consistent annual GDP (gross domestic product) per capita growth rate of around 7% has the potential to propel India into an upper-middle income economy in another 15 years—a stage of development at which average corruption of economies is “generally" lower than that of the lower-middle-income group of economies in which India is currently placed. However, unless anti-corruption institutions are strengthened and supporting infrastructure put in place, e.g. e-governance, skilled manpower, simplified procedures to reduce discretionary powers of the bureaucrats, etc., an increase in income alone would not help much in the reduction of corruption.

“Often bureaucrats exercise discretionary powers in the absence of rules due to an incomplete contract situation which often leads to corruption," says Nobel Laureate economist Amartya Sen. The experience of Hong Kong and Singapore, in fact, shows that they started putting in place tough anti-corruption measures even when their per capita incomes were comparable to that of the African countries today (low-income group) and kept strengthening them as their income levels went further up.

India’s anti-corruption institutions have been facing a growing shortage of human resources, which puts a question mark on the government’s sincerity in fighting corruption. In India, the judge to population ratio is at 17.86 judges per million people against 50 as recommended by the Law Commission in its 1987 report. The Central Vigilance Commission, as on 31 December 2016, has a shortage of 27.77% personnel in Group “A" posts and 28.57 % in Group “B" posts when compared to the sanctioned strength. Similarly, the Central Bureau of Investigation (CBI) also faces a shortage of 1,584 officers against the sanctioned strength of 7,274 as per the latest data from the department of personnel and training.

The Lokpal Act was passed in 2014 but the appointment of a Lokpal has not been done yet. “It is the institutions—the ones which deter corruption and those which punish corruption once it has occurred—that are necessary to make an economy corruption-free. The critical need for trust in citizens and simplified government procedures are also important for reducing corruption in essential services," said B.K. Chaturvedi, a former cabinet secretary who headed several committees on governance reforms. And the institutions are also tainted. The CBI, for instance—one of the watchdogs—is like a “caged parrot speaking in its master’s voice" as per the Supreme Court. The big question now is—is the political leadership up to the challenge?

Shekhar Chandra is a doctoral student at the Massachusetts Institute of Technology.