Where the math doesn’t add up for women

Why are there no female Indian architects? Recently, I was invited to watch a documentary on Balkrishna Doshi, one of India’s premier architects. Although it could have been edited a shade more tightly, the 2-hour-long piece offered a wonderful glimpse into the minds of famous Indian architects such as Charles Correa and of course, the protagonist, Doshi. Since documentaries are largely free of commercial constraints, they are able to be more edgy; the creative voice comes through more honestly since it is not trying to please all sides of the theatrical aisle.

I am at a stage in life when I enjoy documentaries; just as I enjoy non-fiction more than fiction. Good movies, like great fiction, can be transporting—they take you away to another place and time. They make you forget the banality of your own life. But documentaries, like non-fiction books, are inspiring. They make you examine your own life and make changes. Doshi, the documentary, did both. It was thought-provoking and inspiring and addressed a great many things that I too happen to be thinking about. 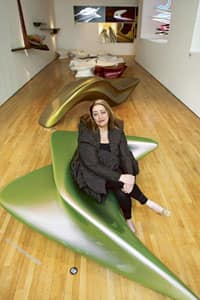 But not a single female architect made an appearance. All of which led me straightaway to the question: Where are the great female Indian architects?

Admittedly, architecture is a famously male-dominated field. For women, being an architect (and being a chef, I might add) is to survive a brutally hard field that thrives on testosterone. Women have made strides in other areas that ride roughshod over the female sensibility—investment banking for instance, it could be argued, is as brutal as it gets. But there are women i-bankers, and corporate CEOs (including our own Indra Nooyi). But architecture, at least in India, seems to be the province of the male.

This will change as a growing number of women enrol in architecture schools. The reason why I consider Zaha Hadid a “rock star" (to use a tired but eminently suitable cliché) is because she has taken on the men at their own game, and won the Pritzker Prize in the bargain.

But she is a lone ranger (to use another cliché, sorry). Lindy Roy and Jeanne Gang are moving up the ranks, but they too are a minority. I am particularly excited about Jeanne Gang, who heads a Chicago architectural firm and is building a series of apartment blocks in Hyderabad for Tishman Speyer. But even in the West, women architects are a minority. Deborah Burke, who designed the 48 Bond Street building in Manhattan, thinks it is because "developers don't like to work with women".

In India, women architects exist in almost every city and do good work. Chitra Vishwanath in Bangalore is noted for her eco-friendly, sustainable buildings. She designed Our Native Village, a resort outside Bangalore that bills itself as “India’s first 100% eco-resort", with a swimming pool that is cleaned and maintained sans chlorine or other chemicals. Similarly, Renu Mistry designs beautiful homes with quirky ethnic touches—her firm Mistry Architects built Ranga Shankara, a theatre that we Bangaloreans are justly proud of. Mumbai and Delhi, too, have their female architects and also a famous non-practising architect, Arundhati Roy.

I am a feminist. But I also feel that the male and female brains perform differently. Men are better at some fields than women. Although he got a lot of flak for his “gaffe" about women not being good at math, I happen to agree with Larry Summers. There are exceptions—Sujata Ramadorai being one—but in general, women somehow don’t do so well in math. None of the Fields Medal winners so far has been a women. Part of the reason why women don’t excel in certain fields could be that they don’t “grab" us. Engineering, for instance, is a male-dominated field perhaps because it doesn’t engage the female mind as much as say, photography or design.

Other fields, like working in a restaurant kitchen, are hard for women to excel in because they are not conducive for raising children or maintaining a family. To be a world class chef like Clare Smyth, head chef of the Michelin three-starred Gordon Ramsey restaurant in London; or Anne Sophie Pic, whose family restaurant La Maison Pic in Valence, France, was awarded three Michelin stars, requires a level of commitment that excludes pretty much every other pursuit. And women, unlike men, either choose not to or cannot afford the reclusive celibacy that fields such as math demand. We are daughters, sisters, mothers and also professionals. Most women I know enjoy the gamut of roles that we are born to play.

Architecture is a wild card. It doesn’t demand one-dimensional celibacy. Then why are there no great female architects?

Among female architects, Shoba Narayan admires Yasmeen Lari, Itsuko Hasegawa and, of course, Zaha Hadid. Write to her at thegoodlife@livemint.com