Home / Opinion / Online-views /  Can India replace China as driver of world GDP growth over next 20 years?
Back
Share Via

Can India replace China as driver of world GDP growth over next 20 years?

China, and not emerging markets, has propelled World GDP in the last 20 years. Now, with the Chinese economy slowing down, will India take its place?

The share of emerging and developing markets—153 of them—in world gross domestic product (GDP) has improved from 42.3% in 1996 to 58.1% in 2016, according to the International Monetary Fund’s latest World Economic Outlook database. (See chart 1—The share of global output has been computed by taking GDP on a purchasing power parity basis). This increase in share is a remarkable achievement and seems to be a ringing endorsement of the benefits of opening up the economy and of globalization. It’s a rise of 15.8 percentage points in the share of global output in the last 20 years. These years have been the heyday of globalization, which has led to a spurt in the growth of developing economies.

But the story gets much more nuanced. If we disaggregate the numbers, we find that China’s share of world output has gone up from 6.3% in 1996 to 17.8% in 2016 (See chart 2). In other words, the lion’s share, or 11.5 percentage points out of the 15.8 percentage point increase in the share of developing economies is due to the extraordinary growth of China alone. That means China contributed as much as 72.8% of the growth in the share of developing economies in world GDP in the last two decades. Remove China from the picture and the performance of the other developing economies gets toned down considerably. 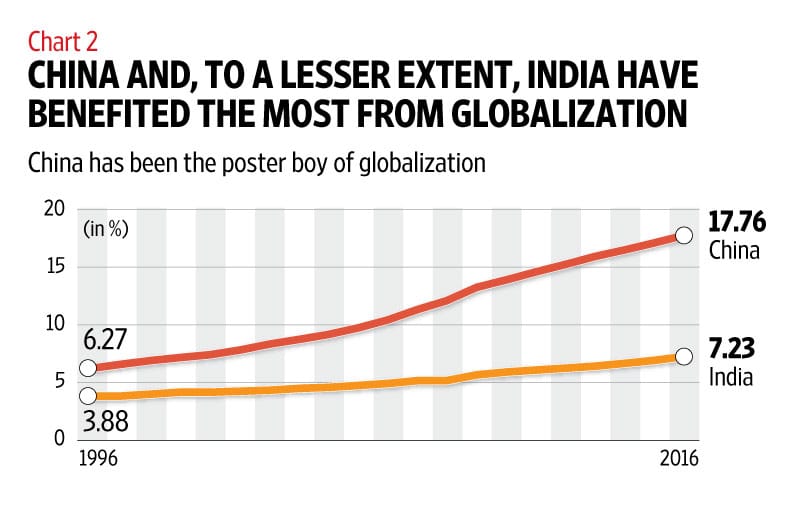 Now let’s consider India (See chart 2), which also did well as it liberalized its economy, with its share of world GDP going up from 3.9% in 1996 to 7.2% in 2016, or by 3.3 percentage points. That means India and China together accounted for 14.8 (11.5+3.3) percentage points of the growth in the share of developing economies, out of the total increase in share of 15.8 percentage points. Putting it more starkly, China and India contributed 93.7% of the total increase in the share of developing countries in global output in the last 20 years.

In fact, developing countries other than in Asia saw their cumulative share of global GDP decline a wee bit from 26.6% in 1996 to 26.5% in 2016. Developing Asia, on the other hand, saw its share rise from 15.7% to 31.6% over the period (See chart 1). Were the last 20 years really a period of globalization, or would Asianization be a more fitting description? Put differently, practically the entire decrease in share of the advanced economies in world GDP in the last two decades has gone to developing Asia.

A look at regions other than Asia throws up a much more sober assessment of globalization. In the last 20 years, the share of the Middle East, North Africa, Afghanistan and Pakistan region went up a bit, from 7% in 1996 to 7.6%—just 60 basis points. Sub-Saharan Africa’s share also improved by 60 basis points, from 2.4% to 3%. The share of emerging Europe increased by a mere 20 basis points. The CIS countries’ share of global output was stagnant. But these small gains were offset by a decline in the share of Latin American developing nations’ share of world GDP from 9.4% to 7.9% in the last two decades.

A look at the figures for Mexico underlines the problem. Mexico’s share of world GDP declined from 2.3% in 1996 to 1.9% by 2016 (See chart 3). And this was despite the common border with the US and despite Nafta. With such advantages, Mexico should have become the poster boy of globalization. Alas, in Mexico’s case, the words of its late dictator Porfirio Diaz, ‘Poor Mexico, so far from God, so near to the United States,’ have rung more true. The country’s story shows that as economies become more developed, they have to develop new sources of competitiveness and move up the value chain or see other, lower-cost competitors steal their jobs and output. The star of the last 20 years hasn’t really been emerging markets—it has been China. For us, the question is, now that Chinese growth has slowed down considerably, can the next couple of decades be India’s?