Stop the world and let me off

Stop the world and let me off

A guy I used to know was an inveterate borrower. Magazines, books, pens, money...he borrowed them all. Only trouble was, he wasn’t much of a returner. Anything he took, it was gone for good. Mr Black Hole, we called him, because that’s what happens with more cosmic black holes too.

That cosmic variety, we can’t see them, for reasons I will explain.

But Albert Einstein predicted their existence, and astronomers think they have evidence for some. Astronomy is full of predictions and deductions, but for my money, black holes are the strangest and most profound of them. 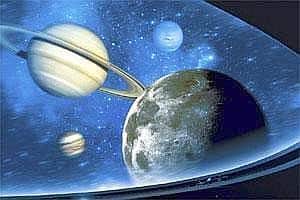 One intense idea there: gravity that captures light.

But look at this more closely. We have gravity here on the earth, which is why none of us, no matter how high we jump, floats off into space.

Except that some of us do, travelling in rockets. How can rockets escape the earth’s gravity when we can’t? That’s because rockets are powerful enough to exceed what’s called earth’s escape velocity, about 11km per second. If you want to be free of earth’s gravitational clutches, the escape velocity is how fast you need to go.

Compare to the speed a Boeing 737 cruises at: about 1km every 5 seconds. Not even in a 737 will you float into space.

Now if the earth’s gravity was stronger, its escape velocity would be higher. For example, on the far larger planet Jupiter, the same rocket would have to reach about 62km per second. On the sun, besides being swiftly toasted, it would need to be ten times faster—617km per second. These are numbers we can calculate, given the volume and mass of these celestial objects.

Einstein took the calculation to its logical conclusion. At the end of its life, the matter in a star collapses dramatically, getting packed more and more densely into an ever-smaller volume. This process enormously increases gravity. Of course this also enormously increases the escape velocity for such stars. Imagine our sun, for example, collapsing to a sphere only 3km across. (There’s evidence this has happened to other stars, so it’s possible this fate awaits our favourite one). At that size, its gravity will be so strong that the escape velocity will exceed—ready for this?—the speed of light, or 300,000 km per second.

There are probably objects in our universe, said Einstein, that we have no way to see. They emit no light, because not even light can escape their grasp to zip its way towards us. They have such strong gravities that anything that gets close—even a passing ray of light that might otherwise illuminate it—is sucked in and can’t escape.

Imagine the uproar in the scientific world. Used to peering through telescopes at celestial objects, astronomers now had to grapple with the idea that there were real objects out there that they could not see. But being astronomers, they promptly began searching for ways to actually observe them. For finding a black hole would be compelling proof of the validity of Einstein’s thought-provoking hypotheses.

So, light from inside a black hole cannot get out. Light that ventures too close gets swallowed too. And these are small objects—possibly only a few km across. How do you find and observe one?

By the way it interacts with other matter. Irresistibly pulled by the powerful gravity of a black hole, all kinds of nearby stuff starts falling into it. In complex ways, this falling process heats up the surrounding gases so much that they radiate X-rays. If these X-rays are emitted before the matter is entirely trapped by the black hole, they can escape and we can detect them. This is why X-ray sources are good candidates for black holes.

And by now, astronomers have found hundreds of X-ray sources, some of which are probably black holes. They also have strong evidence that a huge black hole lurks at the centre of the Milky Way. None of this is certain yet, for the evidence can be interpreted in different ways.

Then again, even before I knew about Einstein’s theories, I was sure at least one black hole existed. It still owes me ₹ 50 and Caravan to Vaccarès by Alistair MacLean.