The Pakistani army is considered to be the only effective institution in an otherwise decrepit nation. The disclosure in The New York Times on Monday that it diverted American aid meant for military operations on its western borders shows how deep the rot is in that country. 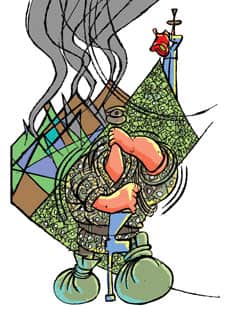 The results have been obvious. More than five years later, Osama bin Laden continues to be at large. The Taliban have regrouped and coalition efforts to bring order to Afghanistan have failed. The rate of desertion among FC units has reached alarming proportions and they are no longer used in core military operations in the frontline South Waziristan region.

Part of the blame, of course, must go to the Americans. One, any programme in which money is disbursed in secrecy, as was the case with CSF, is likely to result in corrupt practices creeping in. Two, the organizational preconditions for the effective use of this money were never appreciated. Three, there was little or no accountability in the spending; the Pakistanis gave the bills and the Americans paid. There simply were no benchmarks to assess progress.

The FC units recruit locally from the Mahsud, Mohmand, Waziri and other tribes. For them, a military career was once a respectable outlet to unchained energies. Not anymore. Poor pay, few prospects for promotion and ruthless Islamist adversaries are no compensation for military glory. For the regular army officers who man these units, these postings are not events in a bright career. Before the money was spent, it was important to remedy this situation, even if the results were to be partial. Not only was this not done, the issue was ignored.

While being just one military programme, its size and scale indicate the depths that the military establishment has plumbed in Pakistan. The usual argument for a coup d’etat in Pakistan is the corruption and poor governance by politicians. It never was a good reason, but with this episode even the pretence has gone.

Here it’s pertinent to point the India angle in the mindset of the Pakistani military. Since 2001, and even before, Indian prime ministers have sought to directly engage the Pakistani leadership. Moreover, India did not harbour any hostile intentions toward Pakistan. Yet, instead of controlling the chaos that pervades its western border, it chose to use money for offensive purposes against India. That too in a period of relative calm along the Indian border. It is such belligerent attitude towards India that has created problems for Pakistan in the first place. There is no case for a military build-up against India when military capabilities are more evenly matched compared?with?the?last?century.

Long before these facts came to light, an analyst of the Pakistani military establishment, Ayesha Siddiqa, has highlighted the nature and extent of the problem. In her book Military Inc: Inside Pakistan’s Military Economy, she showed how the army’s involvement in business had a corrosive effect on its organization and ability. Entire sectors of Pakistan’s economy have been “militarized", something that has weakened the moral fibre of the higher ranks of the armed forces.

It’s cold comfort that animosity to India maybe the single factor that holds together that army. The prolonged spell of martial rule and the influence of money make the task of fighting corruption a doubly difficult one for the new army chief, Gen. Ashfaq Pervez Kayani. That’s if he has the will and energy to do so.

What does the diversion of aid funds spell for the Pakistani army? Write to us at views@livemint.com