Here’s what we learned last week about Apple Inc.: People weren’t that interested in buying iPhones in the three months ended in September, and the company isn’t likely to sell many more phones this holiday season than it did in 2016. Here’s what we still don’t know about Apple: Anything definitive about the company’s most pressing business questions, such as when it can make enough of the new iPhone X to satisfy demand.

Apple’s sales are fine now, but not more than that. The firm sold 2.6% more iPhones in the fiscal fourth quarter ended 30 September, a period that included about a week of sales for the iPhone 8, the less glamorous of two new iPhone models. And the company forecast total revenue will reach $84 billion to $87 billion in the holiday quarter, or about 7-11% higher than a year earlier. 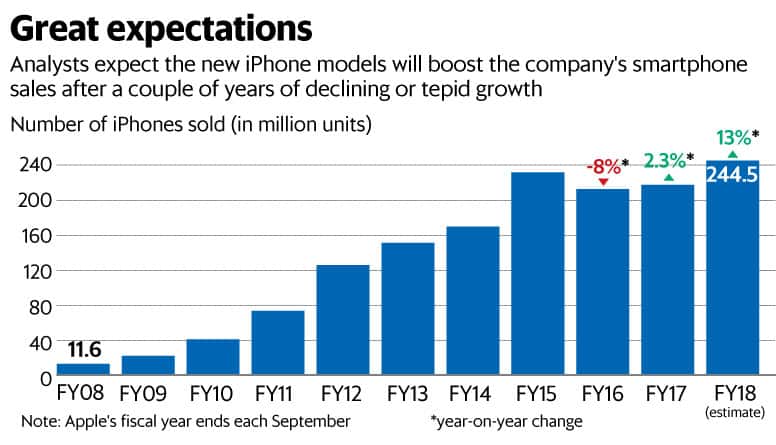 Before the company posted results, Mizuho Securities estimated that a revenue forecast of $84 billion to $86 billion would imply a 1-2% increase in iPhone sales in the December quarter compared with the year-ago period. Not great, although the upper end of Apple’s forecast is higher than Wall Street’s estimates. Remember that the company just closed the books on two middling fiscal years of growth, with revenue falling 8% and then increasing 6% in the 12 months ended in September. That was a respectable rebound, but not the Apple people grew to love.

But it’s truly impossible to know what all this means about Apple’s ability to ultimately recover to healthier rates of growth. It’s clear Apple is selling as many iPhone X models as it can make, but it’s unclear what ultimate consumer interest will be in the $1,000-and-up phone once the company is able to work through production problems on a novel design with some tricky parts.

Apple optimists say enthusiasm for the iPhone X will push large numbers of people with older iPhones to trade up to the new models. And those folks will be content to wait awhile until they can finally find an iPhone X for sale, maybe in early to mid-2018 when Apple has worked out its production kinks. The apparently weak sales of Apple’s “other" new iPhones can then be explained away as people waiting to pick a new phone until they can evaluate both new iPhone models. If that’s the case, Apple will get a pass from investors for a quarter or two of soft iPhone sales.

On the other hand, the Apple pessimists will say the debut of a $1,000, significantly improved smartphone won’t be enough to change smartphone buying trends that are years in the making. In many countries, people on average are holding onto smartphones longer than they used to, in part because they don’t feel a compelling need to buy the latest and greatest models. It’s not clear Apple can buck the trends. The trouble is, we won’t know whether the Apple optimists or pessimists will prevail for three or four months at least. At that point, Apple shares will have spent at least 18 months baking in expectations of a sales surge sparked by the 2017 iPhone models. That belief helped drive up Apple’s stock market value to a record this week and pushed its valuation to nearly 15 times expected forward earnings.

If the much-anticipated sales surge driven by the iPhone X is merely delayed by a few months, then everything will be hunky dory. If the surge doesn’t materialize... Well, that would call into question nearly every decision Apple has made.

Expect the next few months to be a war of Apple narratives. Is Apple the company we’ve seen this year, relatively slow-growing and lifted by pricing power and fat profits? Or will we see a return to something more like the Apple of 2015, which was a seemingly impossible combination of hyper-growth and a high-profit cash machine? Stay tuned. Bloomberg Gadfly