Thanks for Visiting Mint
You seem to have an Ad Blocker on. Please turn it off in order to continue, or whitelist Mint
HOW TO TURN OFF AD BLOCKER
OR
REFRESH IF YOU ALREADY TURNED OFF THE AD BLOCKER
Home >Opinion >Online-views >Sixty-one years after Gandhi

Sixty-one years after Nathuram Godse fired three fateful shots, the spirit and ideas of the man he felled, Mohandas Karamchand Gandhi, are still around, however attenuated they may seem. 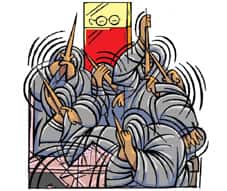 Consider his influence on Jawaharlal Nehru, the man who led independent India till 1964. Much before the first five-year Plan was launched, economist Freidrich Hayek had highlighted the pitfalls of centralized planning. More than Hayek, it was Gandhi’s influence that curbed the worst excesses of that process. Nehru did not make mistakes of the kind that caused Soviet-type political disasters. He did not shake the foundations of private property in India that might have led to serious political problems.

Many who argue that Nehru would have gone the Soviet way dispute this. As usual, Gandhi was prescient: “He (Nehru) says that he does not understand my language, and that he speaks a language foreign to me. This may or may not be true. But language is no bar to a union of hearts. And I know this that when I am gone he will speak my language." Nehru did speak Gandhi’s language. That strengthened Indian democracy, even if the attempt at centralized planning led to poor economic growth.

Ideas apart, Gandhi’s political legacy continues to have a direct bearing on present-day realities. Here, a comparison with his rival Mohammad Ali Jinnah and his offspring, Pakistan, is appropriate. Jinnah’s preference for constitutional and elite-based politics can be said to have laid the foundations for the failure of democracy in Pakistan. Gandhi’s noisy, mass politics cemented democracy in India. Despite ambitious politicians, democracy has not only withstood time in India, but has flourished.

In these times of uncertainty, it is instructive to remember that frail man who also passed through similar uncertainties. At the turn of the 20th century, the expression “India" was uncertain, if not impossible to imagine. Yet Gandhi could do that. He also enabled a legion of others to imagine that.