Reflections on politics of Budget 2017

The annual presentation of a federal budget in a mature democracy such as India should be a matter of routine, and a statement of “central revenue and expenditures"—nothing more, nothing less. That we now have an experience of the budget being presented—full and interim—for a record 85 times is a testimony to its institutionalization. Moreover, anticipating the “political" of this policy instrument, even prior to its having been laid on the floor of the house, is an exercise in premature speculation, with its own risks.

The analysis is not one that is likely to have its firm foundations in facts that indicate the overall direction of national governance—dilemmas of growth rates, employment generation, comparative sectoral outlays, and doing all this with certain fiscal responsibility, stuff that allows the political economist to reflect on the big order normative, and comment on whether the state is saving the poor citizens enough, or whether it is a “roll-back" state that will do less even for its most disadvantaged. 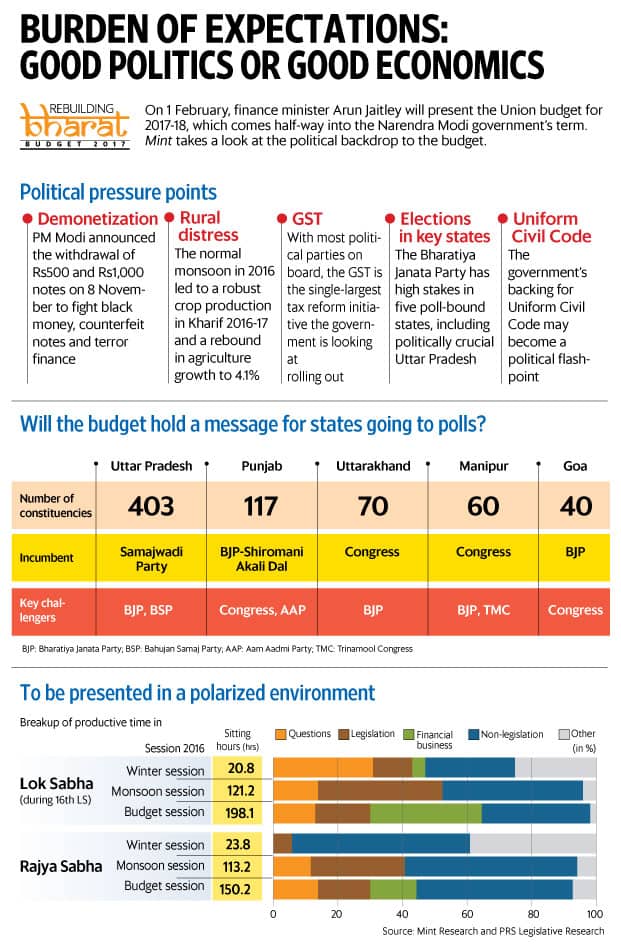 While these analytical comments will rightly be withheld till the dusk of 1 February, when the annual financial statement has actually been laid on the floor of the House, for two important and related reasons, the question has been rife for a while whether 2017 is a “political budget": The first relates to the timing of the presentation having been advanced by close to a month from end February to 1 February. Second, its proximity to the elections for the legislative assembly in five states of India, including the electorally significant state of Uttar Pradesh has made opposition parties—mainly regional and state level—see red.

The centre’s capacity to roll out largesse can likely stimulate “pork-barrel" spending and help it repeat its 2014 Lok Sabha performance (for e.g. in UP, the BJP had 71 of a total of 80 seats). Also, the central government’s most significant monetary action—demonetization through a nationally televised edict on 8 November 2016—has given it an undeniable control over the purse strings, including the ones of all other political parties: state and regional.

In other words, the timing itself has become a political cauldron, calling for a mature delineation of the unanticipated federal political consequences of a national budget. The arguments that follow will attempt to do so, specifying the sum of distinct political consequences for the centre and for the states—the plurality of institutional actors that make up the Indian state. For the centre, the consequences are a dramatic transformation in its twin roles as a political and policy actor. Politics first. Since 1991, Congress dominance at the centre had been steadily replaced by coalitional, power-sharing model with regional parties and states. State-level political leaders were increasingly assertive in the federal arena. Many of them were being noted as the “doers" on the ground of economic liberalization and development. So much so that Andhra Pradesh chief minister Chandrababu Naidu—among the most well-known and early state icons of this new trend—had been dubbed “a CEO in the arena of democracy".

The full and mature reversal of this phase comes now with demonetization. No longer is the centre asking the states for cooperation in implementation of policy reforms. No longer is a technical expert presenting economic policy arguments with autonomous rationality, its classic exposition being the Manmohan Singh-Narasimha Rao duo model. The centre is its own assertive political actor. Using one of the three classic central powers of federal finance (the other two being defence and foreign affairs), the centre has demonstrated that it is unrivalled in its scope of action, and an unconstrained supreme. Budget 2017 will, therefore, be an authoritative display of the same trend—and indeed a consolidation of aggregate political power in favour of the centre.

Its dramatic transformation as a policy actor will also add to this changed equation weighted in favour of the centre. With the greater command over resources, it will now move over to a welfare role redefinition. No longer the politics of “saving the poor" in a targeted manner—implicit in the self-selection of NREGA (only those in dire need will labour hard with their hands, goes the NREGA argument). No longer the politics of states identifying the poor through “Below Poverty Line Surveys" while the centre provides food grains for the PDS. Instead, a basic universal income as a direct cash transfer by the centre will build direct linkages between the poor and the centre.

It may be of interest here to note that the act of voting in rural Gujarat—referred to as “button dabavu" (press the button)—now works both ways. The EVM buttons transfer the votes to Prime Minister Narendra Modi at the centre, and he in turn directly presses the cash transfer buttons; this is the likely metaphorical expression of these new changes. No longer faced with the talk of rights and entitlements as in “Sen-ian" economics (after Amartya Sen), the government rolls back the definition of welfare to a classic utilitarian one, where aggregate sum welfare is the only thing that matters, not individual injustices. The greater the number of Jan-Dhan accounts to which cash has been transferred, and the larger the volume of clean electronic transfers, the greater the political credit at the electoral hustings. This will be similar to Brazilian Lula’s magic of cash transfers, which allowed him to build bases defeating political opponents in the North-East regions of Brazil. Lula’s Bolsa Familia, as these cash transfers are called, allowed him to consolidate both federal power as President as well as increase the vote share of his Workers Party (the PT) against regional parties such as the PFL, which were led by regional bosses and had immense power of vote buying. Similarly, with unified cash transfers, Modi and his party would succeed immensely in undercutting the political base of provincial parties and their leaders.

Surprisingly, this will also likely endear him to the corporates, whose faith is pinned today, and with this budget on the government kick-starting rural expenditure. With low figures of industrial production and growth rates, public investments in infrastructure and directly monetizing the consumers through cash transfers (being spoken of in the press as a “basic income scheme"), will be a way of reviving growth. Increasing rural consumption, from the bottom of the pyramid more generally, is seen as the sure way of consumer-led growth revival. The same sachet of cash will also double up as the employment promise—for there is little being generated in the future in real terms.

Where does this leave the states? In a constrained political arena, even if some regional parties win state elections. And somewhat scrambling to find a unique political script for their electoral promises and policies. The Fourteenth Finance Commission give the states a greater headroom with expenditure, but not enough to match the largesse of the centre. The states will be constrained to provide efficient delivery of civic services, electricity supply, and roads in terms of unique goods to their electorate. But for the larger part, most will be running the same race as Modi—fight against corruption and trying to assert a clean image. But with Modi having already done the deep-cleaning act through demonetization, where will the large critique against him lie? That is the space for future politics in a competitive federal system.

Manisha Priyam is a political analyst and associate professor at the National University for Educational Planning and Administration.