New Delhi: The suicide of research scholar Rohith Vemula has triggered a debate on caste discrimination in India. There is factual evidence (here and here) showing the existence of caste-based inequalities in terms of asset holdings, education and employment. Sure, it can be argued that these are the results of historical discrimination/deprivation and caste- based discrimination does not exist anymore, given the constitutional equality all citizens enjoy.

Is it possible to find out whether caste is still used as a basis for discrimination in India? The question is not easy, as it involves capturing a subjective phenomenon. Various works of research in economics show that caste continues to act as a basis of discrimination in many aspects of life in India. Here are three such findings:

1. Teachers might discriminate in grading students on the basis of caste.

Research shows that students sometimes perform better or worse in exams because their teachers expect them to do so. This is referred to as the Pygmalion Effect. Often, this effect can manifest itself on account of their characteristics, such as race and gender. In a 2012 paper, Rema N. Hanna and Leigh L. Linden, economists at Harvard University and University of Texas, Austin, tested this effect for caste among schoolchildren in India by conducting a grading experiment. The experiment involved inviting schoolchildren with diverse caste, age and gender attributes to take a multi-subject exam with a sizeable monetary reward. The answer scripts were duplicated after the exam. After recording original attributes, one set—without caste and other details—was given to evaluators from within research team. Another set was assigned to locally recruited teachers (also from diverse caste, age and gender backgrounds). In the second set, random caste, age and gender information was assigned to the answer scripts to test how evaluators would react to the information while assigning grades. The scores assigned by the locally recruited teachers were compared with the ones assigned by the evaluators from the research team.

2. Identifying yourself as a member of a lower caste can reduce your chances of getting a job 3. For the same level of education and employment, lower castes report a lower level of life satisfaction 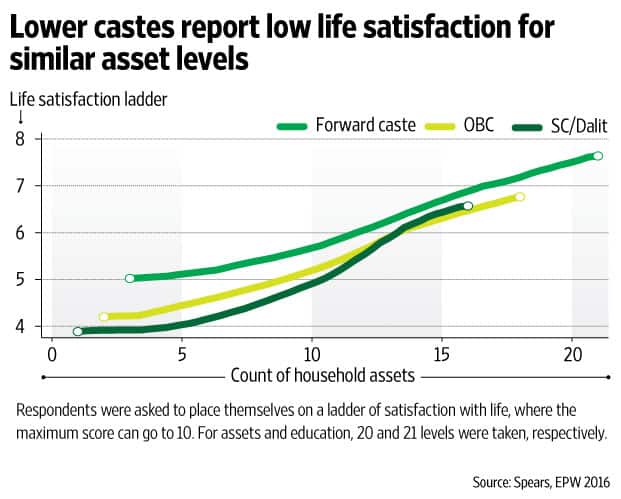 The findings are based on a survey carried out in rural Bihar, Haryana, Madhya Pradesh, Rajasthan and Uttar Pradesh in 2013-14. The respondents were asked to situate themselves on an imaginary ladder of satisfaction with life, with higher levels denoting higher satisfaction. The respondents were divided into forward castes (including Brahmins and general castes), other backward classes (OBCs) and scheduled castes (SC, Dalit, Harijan). The author finds that life satisfaction levels increase with asset holdings and education levels, but caste-wise differences remain for a given level of asset-holding or education.