The poor standards of rating agencies?

In recent years, the role of ratings agencies has increasingly come into question. After the US financial crisis, questions were raised about their role in certifying as AAA bundles of mortgage-backed securities that had toxic underlying assets (memorably described in Michael Lewis’ The Big Short: Inside The Doomsday Machine). In other cases, questions have arisen because they failed to sound the alarm ahead of financial crises—often, ratings downgrades have occurred post facto, a case of closing the stable doors after the horses have bolted.

But it is also worth assessing their role in more normal situations. In the case of India, Standard & Poor’s in November 2016 ruled out the scope for a ratings upgrade for some considerable period, mainly on the grounds of the country’s low per capita gross domestic product (GDP) and relatively high fiscal deficit. The actual methodology to arrive at India’s rating was clearly more complex. Even so, it is worth asking: Are these variables the right key for assessing India’s risk of default? 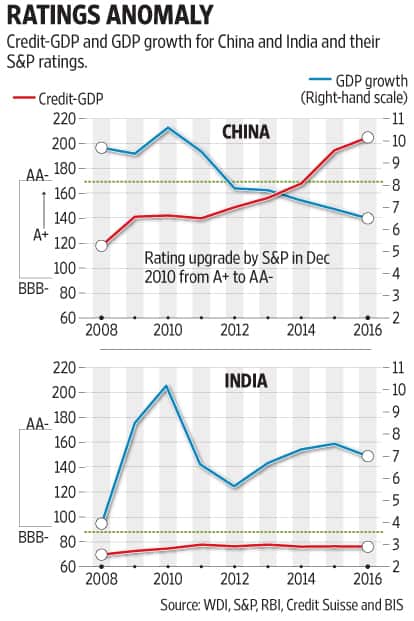 Consider next fiscal variables. Ratings agencies assess fiscal outcomes by comparing a country’s performance to that of its “peers". So, India is deemed an outlier because its general government fiscal deficit of 6.6% of GDP (2014) and debt of 68.6% of GDP (2016) are out of line with certain other emerging markets.

But India could be very different from these “peers". After all, many emerging markets are struggling. But India is growing strongly, while its fiscal trajectory, coupled with its commitment to fiscal discipline exhibited over the last three years, suggests that its deficit and debt ratios are likely to decline significantly over the coming years.

Even if this scenario does not materialize, India might still be able to carry much more debt than other countries because it has unusually low levels of foreign-currency denominated debt, and in particular, because it has an exceptionally high “willingness to pay", as demonstrated by its history of never defaulting on its obligations. As Jason Furman, chairman of former US president Barack Obama’s council of economic advisers, has emphasized, debt sustainability is as much or more about the political willingness to pay rather than the economic ability to do so. The recent biography of former prime minister P.V. Narasimha Rao by Vinay Sitapati makes it clear that India went to extraordinary lengths, including flying gold from the vaults of the Reserve Bank of India to the Bank of England, to reassure creditors in 1991 that it would honour its debt obligations.

India also compares favourably to other countries on other metrics known to be closely related to the risk of default. Consider the contrast with China. In 2008, in response to the global financial crisis, China launched a historic credit expansion, which has so far seen the credit-GDP ratio rise by an unprecedented 86% of GDP, much larger than the stock of India’s credit-GDP (refer to the chart). At the same time, Chinese growth has slowed from over 10% to 6.5%.

How did Standard and Poor’s react to this ominous scissors pattern, which has universally been acknowledged as posing serious risks to China, and indeed the world? In December 2010, it upgraded China’s rating from A+ to AA- and it has never adjusted it since, even as the credit boom has unfolded and growth has experienced a secular decline. In contrast, India’s ratings have remained stuck at the much lower level of BBB-, despite the country’s dramatic improvement in growth and macroeconomic stability since 2014.

In other words, the level and change in the ratings received by China and India bear no resemblance to the dramatically different evolution in the level of, and change in, the underlying risks.

These anomalies raise a question: Does the fault, dear Brutus, lie in the objective economic circumstances of the “beheld-ratees" or in the hard-to-decipher methodologies of the “beholder-raters"?