When Pranab Mukherjee assumes office on Wednesday as the thirteenth President of India, Rashtrapati Bhavan, the world’s biggest presidential residence, is going to get a hostess after a gap of a decade. But the new hostess may not be the First Lady, Suvra Mukherjee, his wife. Persons close to Mukherjee’s family say that multiple health problems may not allow Suvra Mukherjee to take charge of Rashtrapati Bhavan. Pranab Mukherjee’s 42-year-old daughter Sharmishta, a Kathak dancer by profession and who runs a dance troupe, is likely to take on the duties of the hostess in her mother’s place. Sharmishta has told the media that her mother’s “health condition will not permit her in discharging certain duties." People who are close to Mukherjee remembers how, during his term as external affairs minister, he had got his cabinet colleague Ambika Soni to play the role of official hostess when a foreign dignitary visited India with his spouse. 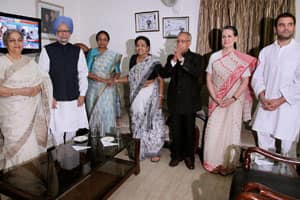 In the pre-Independence era, viceroys, the inhabitants of the presidential palace, were Lords and their wives Ladies. C. Rajagopalachari, who took over as India’s governor-general, was a widower and he did not bother about the role of a hostess. The viceroys used to throw frequent parties and celebrate every occasion in the beautiful and elegant Rashtrapati Bhavan but Rajagopalachari never entertained such extravaganza. He is said to have refused to live inside the palace as he found it too fancy. He even went to the extent of ploughing a part of the Mughal Gardens to grow wheat when the country faced a foodgrain shortage.

The wife of two-term president Rajendra Prasad was not a public figure and never attended public functions with him. Then came S. Radhakrishnan, a widower, whose deep knowledge of philosophy and comparative religion took centre stage. The first ‘First Lady’ to take on the role publicly was the wife of V. V. Giri, Sarswati Bai- she was a familiar face in functions attended by the President. But it was Fakhruddin Ali Ahmed’s wife Abida Ahmed who had actually earned the sobriquet of “First Lady". Herself a politician - she was elected to the Lok Sabha from Barelli, Uttar Pradesh in 1980 and 1984 - she used to organize and manage get-togethers.

Giani Zail Singh had made his daughter the hostess in the presidential palace during his term. Both the spouses of R Venkataraman and Shankar Dayal Sharma were by their husbands’ side at public functions and during foreign visits. K.R. Narayanan’s wife Usha Narayanan, the first ‘foreigner First Lady’ in independent India – she was a Burmese by birth – also played a key role in social welfare activities for women initiated by the President’s office. APJ Abdul Kalam did not have an official hostess in the Rashtrapati Bhavan.

No first lady could bring in changes in the 340-room-Rashtrapati Bhavan like Lady Willingdon did. Among the many beautification works she commissioned, the major one was the Persian style painting depicting a royal hunting expedition on the roof of Ashoka Hall. But Usha Narayanan’s gardening skills were visible in the Mughal Garden during Narayanan’s term. When Pratibha Patil became the first woman president, the office room meant for the First Lady went for some minor changes to accommodate her husband Devisingh Shekhawat.

One will have to wait and see if Mukherjee’s family brings glamour to the presidential residence, which is likely to be the cynosure of eyes in the political atmosphere - tumultuous as predicted - in the coming years.