He is old, slower than he used to be, and almost completely bald. His friends know he is around but are sure that he has retired and that nothing can convince him to return. His enemies—wrongdoers of all hues—are sure he is dead; some of them, those that haven’t encountered him, are convinced most of the stories about him are apocryphal. Then, one day, 10 years on, he returns. His city is infested with just the kind of people he doesn’t like and he sets out to clean it up the only way he knows. Subtlety has never been his forte.

If Alan Moore’s Watchmen looks at the psyche and the same author’s Supreme, at the myth of the superhero, then Frank Miller’s The Dark Knight Returns is a look at the ageing superhero. And he isn’t pretty. Then, writing about pretty men isn’t really Miller’s forte. The author of Sin City, 300, and other such is known for his chiaroscuro-like illustrations, burningly terse prose, and the felicity with which he portrays violence on paper. 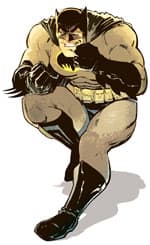 Dark Knight: A hero for adults

Batman is one of the most complex characters in the comics genre—he fights crime but there are shades of grey to his character that are absent in all other superheroes. Superman is the all-American hero who sees life in black and white (more the pity, then, that he is from Krypton, not Texas). Spiderman is the typical American high-school grad, confused but still aware of the fact that great responsibility comes with great power. And the Fantastic Four are more like a performing troupe than a group of superheroes. Batman is different.

And Miller’s Batman is more different than most, more so because of a classic showdown between Superman and Batman at the end.

Miller’s Dark Knight was one of two seminal comic books that came out in the mid-1980s. Moore’s Watchmen was the other. The two books are widely considered to have turned around the American comics books businesss. From being an industry that produced books primarily for young people, it became one that started looking at producing books addressed at adults. Today, there are more comics produced for adults and young adults than for young people.

And it all started with The Dark Knight Returns.

Write to Sukumar at cultfiction@livemint.com