When I was young—oh, most of a century ago—my father came home from work one day with news of an interesting visitor at the office.

It was the calculating prodigy Shakuntala Devi, well known for her prowess with big numbers. My pa gave her a few pairs of numbers to multiply. She complied in no time flat.

He was impressed, even though he had offered her fairly small numbers. 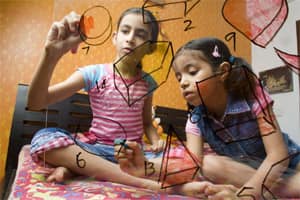 File photo of children attending a summer class in mathematics in Gurgaon. Photo by Madhu Kapparath.

(That’s 18 something or the other illion and plenty of change).

Try doing that the next time you have 28 seconds to spare.

Apart from this one time my father met her, I know little about Shakuntala Devi or her phenomenal powers, though I will say it disappointed both him and me that she now dabbles in astrology. In any case, she belongs to a long line of such prodigies who have fascinated us through the centuries.

Some 19th century examples: In 1812, the American child prodigy Zerah Colburn took only a few seconds to correctly raise 8 to the 16th power. He was just 8 years old. His English contemporary, George Bidder, was 10 when he was asked how many revolutions a wheel, 5ft 10 inches around, would make if it travelled 800 million miles. Fifty seconds later, he had the right answer. (724 billion and change, if you care). In 1867, someone asked the Italian teenager Jacques Inaudi how many seconds there are in 18 years, seven months, 21 days and 3 hours.

He calculated the answer in 13 seconds.

Impressive, fascinating feats, all. You wonder what goes through the minds of these remarkable people as they churn arcane calculations at phenomenal speed. What’s more fascinating is the odd constraints some had on their abilities (though I don’t know about Shakuntala Devi).

Colburn always found numbers larger than a million difficult to handle; later his powers dimmed and were gone by the time he died at 36. Other such geniuses were brilliant at sums, but idiots at nearly everything else, including other kinds of mathematics (which is why they were called “idiot savants"). And consider this contemporary description of what 10-year-old Thomas Henry Safford went through when told to multiply two huge numbers in 1846: “He flew around the room like a top, pulled his pantaloons over the top of his boots, bit his hands, rolled his eyes in his sockets…seeming to be in agony"—but agony and pulled pantaloons notwithstanding, he produced the correct answer in about a minute.

Yet the thing about such numerical feats is that, as daunting as they seem, mathematicians don’t see them as inherently difficult.

“Oh yeah?" I can hear you snorting. “Let’s see YOU multiply two 13-digit numbers in your head then, pal!" And of course you’re right.

I’d probably take 28 seconds just to punch them into a calculator, and then I’d probably get a digit or three wrong anyway.

Still, consider this analogy. I know you can walk to the end of your street, no problem. But if I now ask you to walk to Kanyakumari, you’re likely to gasp, "By the whiskers of Kolaveri, that’s impossible!" Because you know it will take months, you’re not sure of your stamina, all that.

And yet, apart from the distance, walking to Kanyakumari is fundamentally no different from walking your street. It just takes longer.

In the same way, multiplying two 13-digit numbers is fundamentally no different from multiplying 3 by 2 to get 6. It just takes longer.

So what problems are inherently more difficult than multiplying large numbers? Well, some of the prodigies were able to reckon such things as the square roots of large numbers. Bidder worked out an ingenious way to mentally calculate what are known as logarithms, a far-from-trivial feat which speaks of definite mathematical skill. And you may remember my column “Your Private Key, Please", where I explained that finding the factors of enormous numbers is effectively impossible, and this impossibility is the basis of modern cryptography.

My real point is a small truth about mathematics, and maybe life itself, that’s buried in all this. Some things we do look impressive, but are intrinsically no different from everything else we do. But some conundrums seek from us completely new thinking, new methods, even the willingness to transcend our limits.

Such are the characteristics of problems that mathematicians can spend their careers trying to solve. Such are the measures of achievement and triumph, in mathematics and anywhere in life.

And now for no reason I can put my finger on, I’m thinking of cricket.

Of scoring a hundredth century, versus winning a Test series in Australia.