With three kids and a home business, and her disabled mother living with her, Kristen Becker often lets the dishes and laundry pile up. “I am very comfortable with chaos," she says.

He organizes his clothing by type, colour and pattern, alphabetizes his CD collection and keeps rubber gloves in his car for unexpected spills, she says.

He sometimes goads his wife into being neater by making only his half of their king-size bed, heaping the magazines and bills splayed across the kitchen counter into teetering stacks, or moving his wife’s mound of laundry across the room. 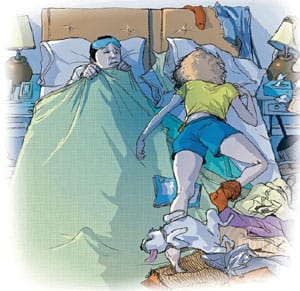 While he was at work, Becker rearranged his closet—randomly moving shirts, pants and sports jackets together, and pairing slippers with boots and sandals with loafers. She moved his toiletries around in the bathroom and took papers out of his file folders and put them back in the wrong sleeves.

“It was delicious," says Becker, 39, who runs an online gift shop from her home in Crofton, Maryland, US. “I was getting back at him for all those times I felt pressured to keep things clean and organized." (Her husband immediately moved everything back. He declined to be interviewed for this column.)

In the battle between messy and tidy, which side should win? Should slobs learn to be neater? Or should neat freaks loosen up?

Neatniks will tell you that order is the way of the world—everything has a place and every place should be labelled. Often, they feel they bear a burden for having to clean up after their partner. Even worse: They think they hold the moral high ground.

But messy people suffer too. They feel guilty for not being neat. They resent being controlled by someone more rigid and demanding. And they hate having to clean when they don’t want to—or endure the hints or griping if they refuse. (Note to my husband: I don’t think I can live without you, but make just half the bed and I’ll try.)

“I have a chronic case of Reorganization Stress Syndrome. It’s when an item that used to be in location A suddenly appears in location B, with no warning," says Dave Brooke, 39, a supply-chain analyst in Santa Rosa, California. As a messy person living with a neat one, he has it worse than most: His girlfriend is a professional organizer. “Having the place look beautiful and neat is a wonderful thing—until I need to find something," he says.

Having to search for your stuff is one thing. But having a fight with your partner over a sock on the floor is something else entirely. “People build up resentment, and then they snap," says Carolyn Kelley North, a marriage counsellor in Lighthouse Point, Florida. “The sock becomes a symbol of the relationship as a whole."

Yes, you heard her right: If you’re not careful, the essence of the most important relationship in your life will be distilled to one dirty sock.

You’re going to want to avoid that. But how?

Ask Brenda Plakans and Jim Rougvie, who have wrestled over their different approaches to neatness for years. “I am anal-retentive, and he absolutely is not," says Plakans, a stay-at-home mom in Beloit, Wisconsin.

Out of frustration, Plakans has deliberately smashed dirty dishes that her husband left in the kitchen for days without washing. Once, while cleaning up, she accidentally threw away a pair of Neil Young concert tickets.

Rougvie has been known to store filthy Rubbermaid containers in the fridge rather than clean them. On the way out one morning, the 42-year-old geology professor grabbed a bag of dirty diapers he had forgotten to throw away and took it to work, thinking it was his lunch.

The good news: They are learning to accept each other—with the help of their common enemy. “Having two small children has knocked me down many notches in my cleanliness standards, and Jim has had to rise to the occasion so that the house doesn’t become a total pit," says Plakans, 42. “Compromise is definitely the strategy."

North, the marriage counsellor, approves. She tells couples to “ask each other what your ideal living situation is—and what you can live with. Then live within it."

But what if you’re not mature enough to compromise? Don’t fret. You still have options:

• Try claiming a room of your own, where you’re free to be as messy or neat as you’d like. Declare your closet off limits. Or stock up on paper plates and plastic utensils, so there are no dirty dishes (the messy person you live with might just feel guilty about the environment and start loading the dishwasher).

• Stand your ground. “If you only get 12 sq. ft out of 2,000, you need to protect it," says Steve Miksis, an accountant in Santa Rosa, California. Miksis, 58, loves to make piles—of clothes, art supplies and workout gear—but for years his wife relegated them to his office loft and a window seat in the bathroom. So when he saw one of her shirts on top of one of his piles, he confronted her. “If you don’t fight for your space, you lose it," he says. (Full disclosure: He and his wife are now separated.)

• Feign ignorance. Peter Wagner does. The 52-year-old financial adviser pretends not to know how to operate the dishwasher or washing machine and not to see his sweaty workout clothes lying on the floor. “My wife thinks that if she lets my dirty clothes pile up I will eventually pick them up and put them in the hamper," says Wagner, of Roslyn, New York. “I call her bluff."

• Resign yourself to your fate. “Neat has won in our life," sighs a messy friend of mine whose husband has been known to scrub the kitchen counters as soon as he comes home each night—even before he takes off his coat. He also labels each pair of scissors by the room they belong in and each outfit he packs for a trip according to the day he plans to wear it. My friend, who has been shamed into confining her mess to one corner of the closet, copes by mocking her spouse—gently—to his face.

Am I advocating ribbing as a coping strategy? Absolutely. And the experts agree: Research shows that a little humour goes a long way towards bridging a gap in a relationship. Most couples can take the joke, even when it carries the whiff of revenge.

For years, Carol Stevens has cluttered up her Bedford, New York, home. Mail and magazines cover the kitchen counter, bras sometimes hang on dining room chairs, a suitcase she hasn’t unpacked sits on her bedroom floor, and the jacuzzi bath is piled with her clothes, papers and photo albums. “I like knowing that my stuff is where I can grab and go," she says.

Her husband, a neatnik who washes his car three times a week, doesn’t appreciate the order behind her mess. “The clutter makes me feel like I am in a combat zone," says Mark Stevens, 62, CEO and owner of a marketing firm in Rye Brook, New York. To cope, he periodically scoops his wife’s piles right into the garbage—and ignores her protests.

Then, one day after work last winter, he did something even worse: He tossed his briefcase on top of one of his wife’s piles on the kitchen island—the place she calls “my spot, like there is an X there"—and crushed her Ralph Lauren prescription sunglasses. Carol, 57, was livid. “He just sees a bunch of junk sitting there," she says. "He never realizes the importance."

She got her payback a few days later, when Mark dropped his Dolce & Gabbana eyeglasses in the driveway—and she ran over them with her BMW SUV. “It was an act of psychosis," says Mark.

His wife sees it differently: “It was the happiest day of my life."