The recent twin summits of the Group of Eight (G-8) industrialized nations at Camp David and of the North Atlantic Treaty Organization (Nato) in Chicago were primarily designed to highlight the US leadership of these Western alliances and underline their continuing role in underpinning international peace and security and the economic well-being of the existing global order. Instead, they have revealed serious limitations of these institutions, as they are currently constituted, in addressing some of the key present and future economic and security challenges.

Take the G-8 summit. While the leaders were understandably distracted by the unfolding Greek economic tragedy, they did manage to look beyond it and focus on new challenges, such as energy and climate change as well as food security and nutrition. In particular, their declarations are noteworthy in emphasizing the security dimension of these issues and the urgent need to address them even while focusing on the goal of reviving economic growth.

However, the presence of a demoted Russian head of state on the one hand and the absence of the key emerging economies—whose development strategies have a direct bearing on energy and climate change—such as Brazil, China and India, on the other, meant that the implementation of these initiatives will be found wanting. 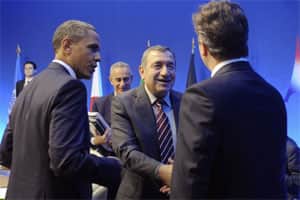 Similarly for Nato, the words of the Chicago summit declaration were not matched by deeds. On Afghanistan, for instance, while the summit drew up a road map to“provide strong and long-term political and practical support through our enduring partnership with Afghanistan" beyond 2014, it was accompanied by the move to pull French troops out before the end of this year, indicating an unseemly scramble for the exit even before the 2014 Nato deadline.

In addition, Nato members have not put their money where their mouth is to ensure a “stable and secure Afghanistan". It is not certain that they will raise the $4.1 billion per year (a paltry sum compared with Nato’s own budget for operations in Afghanistan) required to sustain the 200,000-odd Afghan security forces. While the US is expected to cover about two-thirds, the indications are that other cash-strapped Nato partners might not be able to raise the remaining $1.3 billion a year. So far, only Germany, the UK and non-Nato member Australia have jointly committed a mere $400 million.

Some experts have suggested that emerging economies, particularly China and India might contribute, given their growing interests in Afghanistan. However, it is unlikely that either Beijing or New Delhi would be willing to fund the Afghan forces through Nato; they are more likely to do so bilaterally. This does not augur well for either Afghanistan or Nato’s future.

Yet, despite the shortcomings of the old alliances in addressing the new challenges, the G-8 and Nato still remain the only serious entities to deal with them; neither the BRICS nor India-Brazil-South Africa or even the larger G-20 have yet developed the gravitas or capacity to manage the new challenges. Thus, it may be time for the old and emerging alliances to work together; otherwise, they will both lose.