It might be tempting to put the entire blame for the fall in exports on the sluggish global economic scenario. However, it is also a fact that India’s performance on the external trade front has been found wanting even during better times. Here are some facts which can help understand India’s export predicament during the post-reform period.

India’s pre-liberalization growth strategy was criticized by many on the ground that it stifled exports. It was argued that opening up the economy would open up avenues for increased exports and hence more earnings for the economy. Exports did increase at a faster rate in the post-reform period. Annual percentage growth of exports (in dollar terms) was 37.7% between 1955-56 and 1990-91. It went up to 70.4% between 1991-92 and 2014-15. However, these gains were more than neutralized by a much faster growth in imports. Annual percentage growth of imports (in dollar terms) was 38.4% and 95.1% for the two periods, respectively. As a result, there has been a significant increase in the percentage share of trade deficit to GDP for India. Prior to the reform period, the highest level of five-year moving average of trade deficit as a percentage of GDP was just above 3%. This figure has continued to increase and reached an all-time high of 9% a couple of years ago. Many commentators have suggested that an overvalued rupee is to blame for India’s poor performance of India’s exports. In a column published in Mint, Deepak Nayyar, professor emeritus of economics at Jawaharlal Nehru University, argued that an appreciation in Real Effective Exchange Rate (REER) of the rupee might be responsible for the poor performance of India’s exports in the last few years. A depreciation of the domestic currency is expected to make exports more competitive and discourage imports. This is so because foreign buyers experience a decline in per unit price of export items and domestic buyers experience a rise in the per unit price. However, such an argument assumes that both exports and imports are price-elastic or sensitive to changes in price. It can also be argued that since the bulk of India’s imports constitute items like petroleum and gold, which are known to be price-inelastic, a depreciation of the currency can lead to worsening of the external trade account. Statistical evidence on this count is not conclusive. Quantity indices of both exports and imports from 1993-94 to 2012-13 do not show any significant correlation with REER, suggesting that allowing the rupee to depreciate might not yield any benefits. India’s poor export performance is best captured in the country’s failure to make a mark in export of technologically advanced goods. World Bank’s World Integrated Trade Solution (WITS) database classifies exports into five mutually exclusive categories: primary, resource-based, low technology, medium technology and high technology products. The classification is based on a 2000 paper published by Sanjaya Lall, a professor of economics at Oxford University. Lall defines resource-based and low technology products as ones with low and well embodied technological requirements, while medium and high technology products are ones with higher technological requirements, with the latter having fast-changing technology requiring high R&D investments. A higher share of high and medium technology products in a country’s export basket can give an idea about a country’s pattern of economic development. Mapping India’s performance on this indicator shows that although there was not much difference between India and China in terms of technological classification of exports in 1992 (the earliest year for which China’s data is available), the gap has increased considerably by 2014 (latest year for which data is available). Not only did India fall behind China, it has also fallen behind Vietnam, which had a smaller share of high technology and medium products in 2000 (earliest year for which Vietnam data is available) than India had in 1992. The National Democratic Alliance government’s Foreign Trade Policy (FTP) for the period 2015-20 has noted that mega-regional trade agreements like the Trans Pacific Partnership (TPP), Transatlantic Trade and Investment Partnership (TTIP) and Regional Comprehensive Economic Partnership (RCEP) would have important implications for India’s export prospects. India is currently a party to RCEP negotiations. The FTP notes that these agreements can pose challenges “by eroding existing preferences for Indian products in established traditional markets such as the US and EU and establishing a more stringent and demanding framework of rules". The situation presents a worrisome picture given India’s poor trade performance in the free trade agreements (FTA)/comprehensive economic partnership agreements (CEPA) it has entered into so far. In a paper published in the Economic and Political Weekly (EPW) in 2014, Biswajit Dhar and K.S. Chalapati Rao, professors of economics at Jawaharlal Nehru University and Institute for Studies in Industrial Development, showed that barring Singapore, India’s imports had increased at a much faster rate than exports with all FTA/CEPA partners between 2005 and 2012. 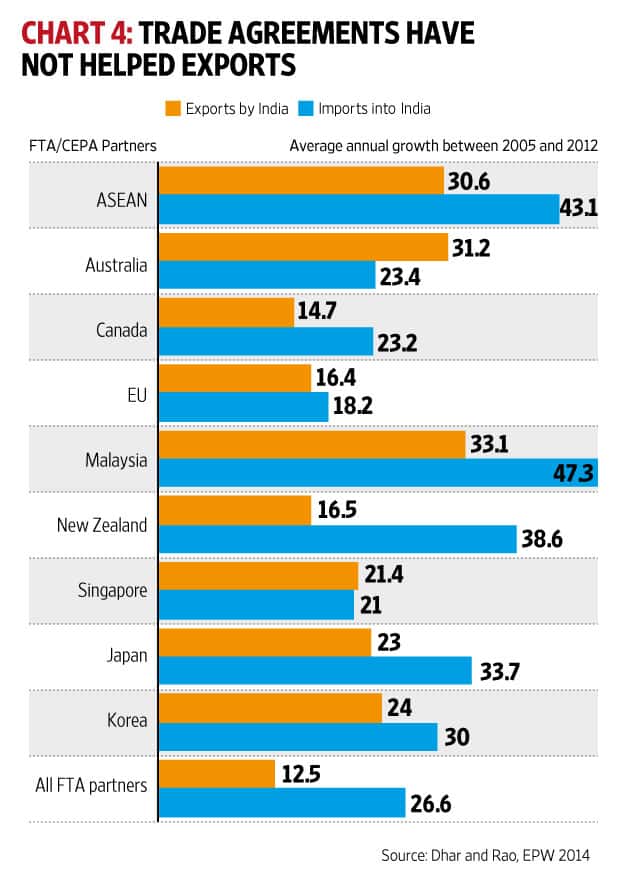 The challenge of providing right incentives

Although disappointing as a whole, India’s export performance in the ongoing fiscal year is not a monolithic one. An analysis of India’s exports by commodity group shows differing trends. While important commodities in India’s export basket like petroleum and gems and jewellery have experienced a decline in value as well as quantity, some commodities like pharmaceuticals and selected textile products have bucked the overall bearish trend. Some of these aspects were pointed out in an analysis of export data published in Mint. An editorial in EPW published last month has also highlighted the differential performance of exports, and argued for appropriate policies to incentivise sectors which have performed better. India, once again, has something to learn from China in this regard, which has managed to push more exports into India in this fiscal year, in a situation where all major trade partners have seen a decline in their exports to India.