Home >opinion >online views >An epidemic of crimes against women?

An epidemic of crimes against women?

The recent gang rape of a journalist at Shakti Mills in Mumbai has been followed by a flurry of reports on sexual assaults from different corners of the country. Accompanied by frequent reports of rising statistics of crimes against women, they seem to indicate a pandemic of gender crimes in the country. An analysis of gender crime data, based on police records maintained by the National Crime Records Bureau (NCRB), leads to more sobering conclusions.

The number of reported crimes against women has indeed risen at an annual clip of 4.7% between 2001 and 2011 but this is less than the 12% growth seen in the decade-ago period. But given the limitations of official crime data, it is difficult to say whether crimes against women actually increased more during the 1990s or if simply more crimes were reported in that period. The reporting effect also makes inter-state comparisons difficult. 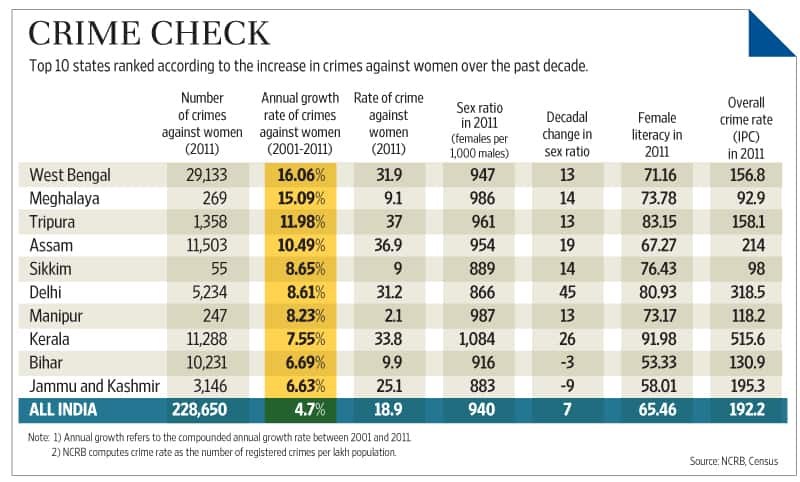 The same holds for the bottom 10 list, comprising as it does of relatively less gender-equal states such as Uttar Pradesh as well as more egalitarian ones such as Tamil Nadu.

A closer look at the crime data, taking into account the socio-economic correlates of gender crimes seems to suggest that the skew in the crime data across Indian states perhaps owes more to the wide gulf between actual and reported rates of crime rather than an actual increase in crimes in those states.

As the chart shows, states which have seen an increase in crime rates are also those which have seen an improvement in the sex ratio over the past decade. The average sex ratio of the top 10 states in the table at 947.3 is higher than the national average, while that of the bottom 10 is much below the national average, indicating the absence of any easy link between patriarchy and gender crime rates. The greatest correlate of gender crimes is the overall crime rate in a state, suggesting that the reported gender crime rate reflects to an extent the willingness of the police to register crimes.

There are several reasons why under-reporting is high in India. First, reporting of crime has historically been low because of perverse policing incentives, and they tend to be even lower for gender crimes. As a 2009 research paper by Massachusetts Institute of Technology (MIT) economist Abhijit Banerjee shows, policemen in India tend to be far more reluctant to register crimes such as sexual harassment and domestic violence as compared to other crimes such as break-ins.

Second, the perpetrators are often friends and family, leading to rampant under-reporting.

In nine of 10 registered rape cases, for instance, the rapist is known to the victim. And even when the rapist is a stranger, the social stigma associated with rape prevents reporting, as the Shakti Mills saga demonstrates. The investigation into the rape case of the journalist has revealed that the offenders had sexually assaulted at least three other women at the same spot earlier, all of which went unreported.

Low conviction rates act as a further disincentive. To be sure, the increase in reported rates may be partly reflecting an actual increase in gender crimes in some states. Still, there is no denying the importance of the reporting effect. Consider the contrast between Bihar and UP for instance. Both states are known to grossly under-report crime rates.

Till the mid-90s, most districts of Bihar did not report any crime against women at all! Over the past decade, Bihar has seen a dramatic improvement in its law enforcement machinery while UP has languished. Yet, it is Bihar rather than UP that has seen an increase in both overall crime rate and in the gender crime rate. Greater reporting in Bihar because of better policing standards appears to be the most likely answer to this paradox.

Gender-neutral interventions such as better police administration can, therefore, help deal with crimes against women. Given the Indian context of low reportage, we must also expect a significant increase in crime rates across categories wherever such reforms take place. Some gender-friendly interventions can also help. Recent research by Lakshmi Iyer of Harvard Business School, Anandi Mani of University of Warwick, and Prachi Mishra and Petia Topalova of the International Monetary Fund shows that a rise in the proportion of elected women representatives at the local level can lead to greater reporting and higher conviction rates for gender crimes. This may be one reason why states such as Tripura, West Bengal and Kerala, where panchayati raj institutions have been stronger, also have higher reportage of gender crimes.

We will be able to disentangle the actual rate of increase in crimes from the increase in reporting only if we carry out independent crime victimization surveys as developed countries do, to gauge the extent of under-reporting. Till we do that, we need to take official crime data with large dollops of salt.

Krishna Merchant and Aishwarya Deshpande contributed to this analysis. Comments are welcome at theirview@livemint.com

Pramit Bhattacharya is a staff writer at Mint.