100 days in the White House

100 days in the White House

Henry Kissinger once wrote, “The modern politician is less interested in being a hero than a superstar. Heroes walk alone; stars derive their status from approbation." So, is US President Barack Obama a hero statesman or a superstar politician?

Having completed 100 days in office this week, Obama remains popular not just in the US but the world. His unique story and personal charm have ensured a fountain of excitement and goodwill so far. But for this goodwill to be sustained in the future—one already gloomy with economic crises and security threats—the world will need more than just charm. 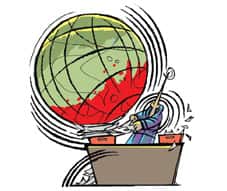 In substantial terms, Obama’s handling of the US economy leaves much to be desired. His sporadic bank recapitalizations and debt guarantees have helped Wall Street reap profits without getting rid of toxic assets. It’s a sign of the confused times that Obama appears beholden to Wall Street’s political influence, just as he is to the American Left’s sway. Like his February stimulus package, this month’s auto industry nationalizations are also meant to help unions. Obama gets points from his Left-leaning base for doing so, but his unwillingness to rattle Leftist cages only means he relents on promises such as reducing farm subsidies.

Obama promised a brave new world that would make everyone happy. But his biggest promises—on the environment and healthcare—will inflate a budget deficit already at $1 trillion. Little surprise, then, that countries holding US public debt are making noises about the dollar.

His record in the international arena is mixed: He has handled Iraq well, but bigger threats such as Iran and North Korea loom on the horizon. Obama is trying hard to distance himself from George Bush. But are his actions part of an attempt to be different from Bush Jr or are they part of a different, more sobering, reality? It will not be long before we know, for the decline in American hard power from the end of the Cold War is clear and unmistakable.

Perhaps the US is actually beginning to realize that it can’t cope with threats on its own. Instead, Obama is endearing European audiences by admitting America’s excesses. Or perhaps Obama’s own superstar needs are interfering with the statesmanship required to wrest control from Somali pirates and Taliban terrorists. If it’s the latter, let’s hope the next 100 days show Obama more interested in being a hero than a superstar.

Is Barack Obama off to a good start? Tell us at views@livemint.com