Home / Opinion / Are grain procurement shocks inflationary?
Back
Share Via

Understanding monetary policy design in emerging markets is a growing area of research. One aspect missing in this literature is how distortions in the agriculture sector amplify the impact of a variety of shocks on output and inflation dynamics. In India, the combined agriculture sector (agriculture, forestry and fishing) comprises 17% of GDP, or gross domestic product (at constant 2013-14 prices). The employment share of the agriculture sector in India is also large: 47% in 2013-14. The government periodically intervenes in the agricultural sector, especially in the foodgrain market, by directly procuring grain from farmers to create a buffer grain stock to smoothen price volatility and for redistribution. 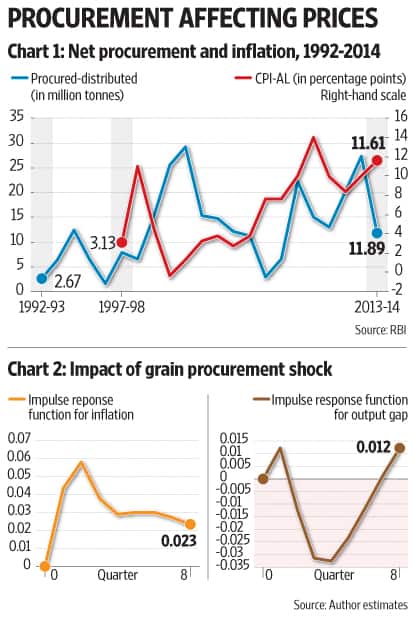 The blue line in chart 1 shows the net grain procured (procured-distributed) of rice and wheat in million tonnes by the government. The average amount of net grain procured per year was approximately 13 million tonnes during the 1992-2014 period (8% of total production), while gross procurement averaged 23.5% during the same period. The red line denotes inflation corresponding to the consumer price index for agricultural labourers (CPI-AL). As can be seen, the amount of net procurement trends upwards and has become increasingly volatile. CPI-AL measured inflation also trends upwards in the same time period. Chart 1 suggests that by acting like a demand shock, procurement increases the open market price for grain because it creates a shortage in the open market. This leads to the question: Are grain procurement shocks inflationary and how do such shocks get transmitted?

In our ongoing International Growth Centre (IGC) project, titled “Terms Of Trade Shocks And Monetary Policy In India" (Ghate, Gupta and Mallick, 2016), we develop a three-sector (grain, vegetable, and manufacturing) closed economy NK-DSGE (New Keynesian Dynamic Stochastic General Equilibrium) model of the Indian economy to understand how a major distortion in the Indian agriculture sector—the procurement of grain by the government—affects inflation and output dynamics.

Our main contribution is to use frontier-level research to identify the mechanism through which procurement shocks—by leading to changes in the inter-sectoral terms of trade—get transmitted to the rest of the economy, leading to changes in aggregate inflation, sectoral output gaps, sectoral labour resource allocation, and the economy-wide output gap.

Our theoretical framework leads to new insights on the inflationary impact of procurement shocks, and the mechanism through which inflation gets generalized.

When the government procures more grain, this increases the mark-up that grain producers charge over their marginal costs of production. This leads to higher prices in the open grain market, and inflation in the grain sector. At the same time, the increase in the price of grain reduces the real marginal costs of production in the grain sector, inducing farmers to produce more grain, and hire more labour in the grain sector. The higher demand for labour in the grain sector pushes up nominal wages as labour gets pulled out of the other two sectors in the economy (vegetables and manufacturing), leading to an increase in nominal wages in these sectors as well. Confronting higher nominal wages, vegetable producers and manufacturing firms revise their prices upwards, leading to inflation in these sectors as well. This is the mechanism through which a procurement shock gets transmitted to the other sectors in the economy and leads to generalized inflation.

While our results are preliminary, chart 2 shows the impulse response functions of a procurement shock on two variables, namely inflation (general-CPI), which is on the left, and the output gap on the right. Impulse response functions are a reaction of an endogenous variable to an exogenous change such as a shock. We use quarterly data from 2004 Q2 to 2016 Q1 for these variables. As shown in the chart, on impact, the procurement shock, which has a standard deviation of 0.66, increases generalized inflation, which increases and peaks at 6% in two quarters. Although inflation starts falling after two quarters, it still remains positive for about six-seven quarters after that. The effect of procurement on the output gap on impact is also positive, similar to what we show in the model. The output gap increases and peaks at 1.2% in the first quarter, after which it starts falling and remains negative for most of the period before converging back to zero.

Our analysis is general enough to inform monetary policy in other emerging market economies’ central banks that want to understand how distortions in the agriculture sector amplify the impact of a variety of shocks on output and inflation dynamics in the economy.

Published with permission from Ideas For India, an economics and policy portal.