Frankfurt/Washington/Mumbai: As populism grips Europe, the US and elsewhere, there are few targets as ripe for political assault as the institutions stuffed with unelected technocrats wielding the power to affect the economic fate of millions.

That means you, central bankers.

And the arrows have started to fly. In the US, the Federal Reserve’s freedom to set interest rates is already the target of House Republicans pushing for a rules-based policy. Across the Atlantic, the European Central Bank is under immense pressure to tighten policy at Germany’s behest. In India, a dramatic monetary reform has happened largely over the central bank’s head.

Monetary officials are being lambasted by politicians feeding on anti-establishment sentiment, and some institutions have effectively given up the legally-mandated autonomy that they previously enjoyed. It is conceivable that governments may soon want greater control of rates and balance sheets, while pushing other political tasks, like amending income and wealth inequality, onto central banks’ to-do lists.

“In any conflict with elected legislatures central banks are going to lose, and the perimeter of independence is still a very, very open question," said Charles Goodhart, a professor at the London School of Economics and a Bank of England policy maker after it was given the power to set rates independently 20 years ago. “It’s certainly possible to go back to a world where the short-term interest rate is set by governments."

That seems like a revolutionary thought. But things haven’t always been the way they are now. As Goodhart recalls in a 2010 paper, in the 1960s the largest department at the BOE was the one which administered exchange controls, a policy which the bank didn’t set.

Few observers would expect governments around the world to formally strip central banks of their powers tomorrow. But the political tone in many countries is making formal independence less and less meaningful, whether the central bankers are complicit or not.

Take Republican Jeb Hensarling, chairman of the US House Financial Services Committee. He represents the thought that, the more discretion central bankers have to set policy, the less transparent and accountable they become. 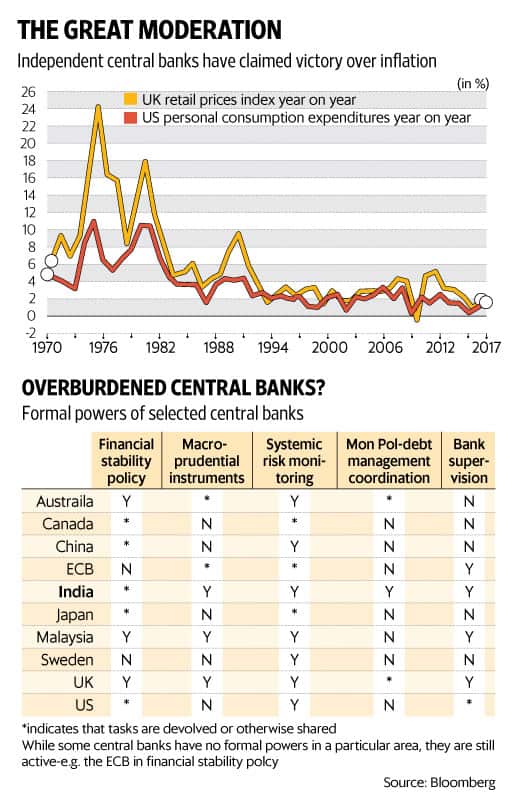 Republicans have for several years proposed legislation to make Fed officials follow a monetary policy rule, or explain when their decisions ignore its recommendation, though there is no indication so far that President Donald Trump wants it to become law.

“We must have a more predictable, disciplined and transparent monetary policy," Hensarling said on 15 February. “Building that healthier economy for all clearly requires changes at the Fed."

The threat of change has also been directed at the Bank of England, by UK Prime Minister Theresa May, who is channelling post-Brexit vote discontent at the Bank’s allegedly partisan behaviour. Perceived mistakes in the bank’s forecasting and analysis have become a favourite topic for lawmakers keen to prove the fallibility of technocrats.

In the euro-area, where the ECB’s autonomy is arguably the most secure legally, German politicians, eyeing elections in September, are lining up to tell its president Mario Draghi what to do—namely raise rates to suit their own motoring economy, when much of the euro area still suffers from double-digit unemployment.

Even the defenders of robust central banks now think something has to give. Ed Balls, a former UK Labour politician and adviser to Chancellor Gordon Brown in 1997, wrote in a paper last year that “in order to protect their popular legitimacy," central banks should be prepared to “sacrifice some political independence."

The implicit threat is that central bankers could, if they’re not careful, eventually find themselves in the predicament of their colleagues in Turkey and Hungary, with little ability to act outside government writ, despite independence that is assured on paper.

For example, constant criticism of monetary policy by Hungarian Prime Minister Viktor Orban’s government only stopped after the premier in 2013 installed Gyorgy Matolcsy, whom he had called his “right-hand" for economic policy, to head the central bank. Matolcsy has yet to prove whether he can raise rates as well as cut them.

That said, Cetinkaya raised the bank’s key interest rates twice and delivered an additional tightening through use of extraordinary measures since early January to bolster the currency. Erdogan continues to call for lower rates, with inflation more than 8%.

Threats aren’t just restricted to rate setting. The Reserve Bank of India seemingly stood aside as the government of Narendra Modi rammed through a cash reform late last year that invalidated 86% of currency in circulation. While the move was justified by the government on the basis of corruption-fighting, the central bank wasn’t visibly involved in the planning.

And governor Urjit Patel’s predecessor, Raghuram Rajan, spent his last months fighting against a government proposal to use the central bank’s balance sheet to fund a recapitalization of stricken commercial lenders.

“I do think that in a period where central banks have been—as chairman Bernanke once said ‘the only game in town’—they do occupy a space that politicians would rather occupy," Rajan said in a 16 February telephone interview.

But why does central bank independence matter? The privilege of these institutions to operate independently is tightly bound to the practice of inflation targeting, a method pioneered after governments let price gains get out of control in the 1970s and 1980s that was first adopted in New Zealand.

An independent central bank was found to be the best way to ensure price stability, as such an institution in theory doesn’t face the same temptations to keep borrowing costs low in the face of high debt or impending elections.

But now, after a long period of low inflation across the developed world—the single biggest achievement of central banks in the past 30 years—that concern has faded into the background. Witness Japan, where, in the absence of inflation, the central bank and the government have essentially joined forces in an attempt to re-conjure it.

And the crisis-era accruals to central bank powers—bank supervision, macro-prudential policy, resolution duties—begin to make the institutions look top heavy. Balls, for one, argues that central bankers shouldn’t see themselves as independent for all tasks.

The irony now is that even if governments might want to curtail their powers, central bankers are being asked to delve more into the deep working of the economy, more rightly the preserve of the elected: Who wins and who loses.

Low inflation has occurred at a time when union power has decreased and real wages in some economies didn’t grow as fast. Central banks are an easy political scapegoat for these trends, and ignoring the impact of monetary policy is no longer an option.

The Fed Board’s semi-annual report to Congress in June included a study titled: Have the Gains of the Economic Expansion Been Widely Shared? At a US House hearing on 15 February, Al Green, a congressman from Texas, pleaded with Fed chair Janet Yellen to study the root causes of African-American unemployment.

The idea that monetary policy doesn’t represent everyone, and policies like quantitative easing that push up the prices of financial assets that only relatively wealthy people own, is what often now drives the questioning of BOE governor Mark Carney by British lawmakers.

Draghi regularly faces the same kind of accusation. And the response is usually, that monetary policy can do nothing about it. “I find it hard to reach the conclusion that, over a longer time frame, the outcome of our policies has been—or will be—to redistribute wealth and income in an unfair or unequal way," Draghi said in Berlin on 25 October.

Yet so powerful is this theme that central banks can either try to address it, or watch it used to whittle away at their legitimacy and autonomy. “At the very least central banks have to recognize that quantitative easing has had distributional consequences," said Panicos Demetriades, a professor at Leicester University in the UK and the former Cypriot member of the ECB’s Governing Council. Demetriades was forced to resign in 2014 under political pressure during the country’s financial crisis.

“If you don’t understand what you are doing in this regard, the politics comes and hits you," he said. Bloomberg