How now brown cow! This jingle was made famous by teachers of elocution and public speaking. They used it to illustrate the pronunciation of the diphthong /au/ which we also find in “plough", “brow" and “doubt". Indian speakers have no difficulty with these words. There may be a minor difference, since native English speakers have a perceptibly longer sound for “ow". The mouth position is also slightly more open. The jingle has been used in many movies and television shows.

Most readers will be familiar with a similar jingle in literature. Bernard Shaw’s “Pygmalion" had the character Henry Higgins, who was elocution teacher par excellence: he transformed a Cockney flower girl into a duchess who could speak “proper English". The jingle he used was “The rain in Spain stays mainly in the plain." 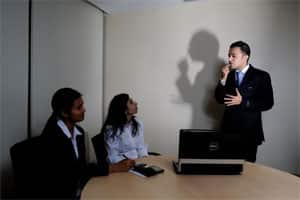 Many speakers felt that their regional accent showed them in a poor light and led to discrimination in the workplace. Photo: Pradeep Gaur/Mint

But elocution is a composite of several factors, and not just the accent. It includes voice quality, speed of delivery, intonation, distribution of stress and confidence in articulation.

Teaching elocution is a major enterprise in India. In the US, there are speech therapists who help Indians working in that country. My search on the Web for “accent reduction in India" gave me 143,000 results. The demand for such courses stems from varied causes. Many who seek professional help are people who feel below par as communicators and lack confidence in themselves. Jobs in call centres require people who can speak clearly and intelligibly in English. Even people in senior positions look for training in elocution, since they have to compete for positions in the global job market. They need to master clear and effective presentation skills. With advancement in their career, people face new challenges in communication. They have to attend conferences, make presentations, and participate in group interaction as well as one-to-one discussion with their employers.

An interesting development of recent times is the increasing interest in a career in the broadcast and telecast media. Jobs as anchors on television programmes, and as disk jockeys and video jockeys, have a glamour that attracts youth. Deejays and veejays have to be fluent communicators, and skilled in impromptu dialogue in real situations.

A syllabus in elocution and accent reduction should normally contain the following sections: speech organs and their functions, movement and shape of lips, teeth and tongue, phonemes or meaningful sounds of English, articulation of vowels, consonants and diphthongs, word stress, the music of the English sentence or intonation, ear training to identify sounds, pauses, pace of articulation, basic conversation practice, and examples of accents from different regions.

The sounds that Indians find difficult have been extensively studied. The tendency to confuse /v/ and /w/ is common, and you hear “Villiam" instead of “William". The initial sound in “thought" loses its fricative quality and the word sounds like “taught". The sibilant sounds, /s/, /z/ and /zh/, as in “measure", are confused; I have heard “zoology" pronounced joo-olo-zee. Consonant combinations in English require special attention. Words like “inexplicable", “twelfth" and “against" are often mispronounced. There is also a need to slow down the pace of delivery.

Today, there is greater tolerance of differing accents. BBC permits the use of regional accents by broadcasters. People are willing to go half way to meet their interlocutors.