For its level of income, India, as well as many of its states, could do a much better job in taking care of their most vulnerable people

American poet Walt Whitman’s “Song of Myself"—“Do I contradict myself/ Very well then I contradict myself/I am large, I contain multitudes"—seems tailor-made for India. Which country can India be compared to, in economic terms? Is India’s level of economic development more or less like Vietnam’s, because their per capita incomes, in international dollars and in purchasing power parity terms, are almost the same?

But per capita incomes vary widely in India, with Maharashtra’s being four-and-a-half times as much as Bihar’s. And that’s leaving out smaller states such as Goa and Sikkim that have far higher levels of income per head. India is very far from being dirt-poor Haiti, whose per capita income is less than one-third of India’s. But a research note by HSBC earlier this year pointed out that Jharkhand had the income per head of Haiti, while Bihar’s, which is even lower, matches that of Eritrea. In terms of infant mortality, Madhya Pradesh is at around the same level as Haiti. Life expectancy in Kerala is 12.3 years more than in Assam. In short, making a general statement about the Indian economy, without accounting for its massive diversity and contradictions, could mean very little. 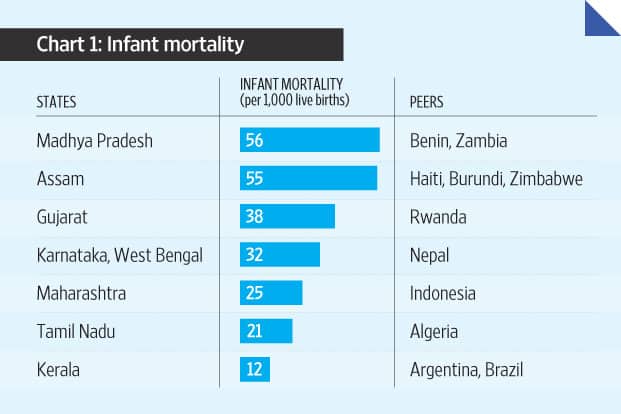 Poverty headcount ratios, too, can be compared across states and internationally because they have the same benchmark of $1.25 per day at purchasing power parity rates. Poverty ranges from a headcount of a low of 7.1% for Kerala to a high of 33.7% for Bihar. Poverty in Kerala, Himachal Pradesh, Andhra Pradesh and Punjab is lower than in South Africa’s 9.4%, according to this yardstick. On the flip side, poverty in Bihar is higher than in the Republic of the Congo, which has a poverty headcount of 32.8%, and is comparable to that in Senegal, where it is 34.1%. 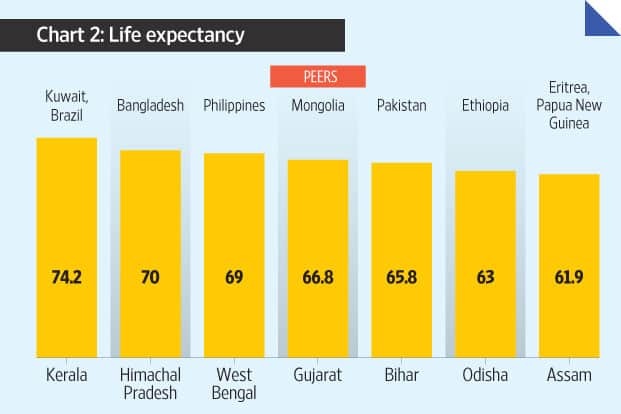 These numbers speak volumes. Why is life expectancy in Haryana, which has a per capita income 1.9 times that of West Bengal, two years lower? Why is the poverty headcount ratio in Andhra Pradesh at 9.2%, compared with 16.6% for Gujarat, despite Andhra Pradesh’s per capita income being less than three-quarters that of Gujarat? Going back to the Vietnam example, note that despite having a per capita income slightly lower than India’s, its poverty headcount ratio is 2.4%, compared with India’s 21.9%. For its level of income, India, as well as many of its states, could do a much better job in taking care of their most vulnerable people.

Manas Chakravarty looks at trends and issues in the financial markets. Your comments and feedback are welcome at capitalaccount@livemint.com