Thanks for Visiting Mint
You seem to have an Ad Blocker on. Please turn it off in order to continue, or whitelist Mint
HOW TO TURN OFF AD BLOCKER
OR
REFRESH IF YOU ALREADY TURNED OFF THE AD BLOCKER
Home >Opinion >The subcontinent&#8217;s Muslim is influenced more by Hinduism than Islam

The subcontinent&#8217;s Muslim is influenced more by Hinduism than Islam

The subcontinent’s Muslim is influenced more by Hinduism than Islam

Eid was Monday, 21 September, for the world’s other 480 million Muslims—Pakistanis, Indians and Bangladeshis. 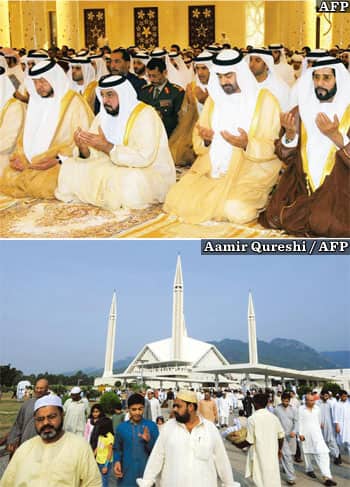 A question of faith: Eid al-Fitr prayers at the Sheikh Zayed Mosque in Abu Dhabi (above), held a day before prayers at Islamabad’s Faisal Mosque.

The first group anticipated Eid. They consulted science to know when the lunar month of Ramzan ended, and when the first moon of Shawwal would appear. The second group would not end Ramzan till they physically saw the moon. The difference isn’t trivial. On 19 January 1998, two Muslims preaching rationalism in Mumbai’s Jama Masjid were killed in a dispute over the Shawwal moon. Without this visual satisfaction, every year, desi Muslims refuse to end their fast.

Why? Their culture isn’t really Islamic; it’s Hindu. That explains the idolatry towards the moon. Only one group of South Asian Muslims celebrated Eid on Sunday with the rest of the world, and that was the Pashtuns of the Frontier. We instinctively know they are different: more Afghan than Indian.

Indian Islam, like Sikhism, Buddhism, Jainism and the animism of the scheduled tribes, is really an aspect of Hindu culture. Muslims bow to a different deity, but in India that means little. The Patels of Charotar worship Krishna as Rannchhod. The word means “he who ran from battle". It refers to Krishna’s fleeing the ferocious attacks of Jarasandh and his general Kalyavan, abandoning the people of Mathura for Dwarka. Patels are not an insignificant community: Vallabhbhai, Praful and half of America’s motels. They worship Krishna’s instinct of self-preservation because it saves his life. But it will put off other Hindus who venerate the war-like Krishna of the Bhagavad Gita, a very different deity from Rannchhod.

Muslims might see themselves as having two identities, Muslim and Indian. But the first is quite superficial, and the second is really Hindu.

In his Vijayadashami address on 27 September, RSS sarsanghchalak Mohan Bhagwat said this: “The word ‘Hindu’ does not symbolize any particular way of worship, language, province, creed or religion. Actually it signifies an ancient culture, a way of life that has come down to us through (the) ages."

He’s right, and the RSS is wrong to oppose reservations for Muslim OBCs. Reservation is inclusive, and ends separatism because it fragments identity. That reservations are also opposed by puritanical Muslim groups should be a giveaway to the RSS. But it’s not a body of intellectuals and hasn’t had an original thinker since the great Golwalkar.

The Hindu-Muslim divide on the subcontinent is quite artificial. Outsiders cannot separate us easily because we behave identically. Culture is how we behave in traffic, how clean we keep our streets and our neighbourhood, how we spice our food, whether we live as independent men or with our father, how tax-compliant we are, how intrusively we pray and celebrate and how corrupt we are. Muslims show no difference on these counts. Civilization is to be found in a nation’s thana (jail) and kutchehri (court). The Pakistani police station and post office is run with exactly the same incompetence as the Indian. The two-nation theory is bogus.

Jinnah founded Pakistan, but a brilliant man from Maharashtra made it Islamic. Abul Ala Mawdudi was the founder of Jamaat-e-Islami, the modernist end of Islamism if Taliban and Deoband represent the conservative end.

Mawdudi is the intellectual source of Al Qaeda’s ideology, a matter of pride and shame for Indians, depending on how one looks at it. American writers usually trace Osama bin Laden’s ideas to the Egyptians Hassan al-Banna and Sayyid Qutb. Both men lifted the work of Mawdudi, starting with his Al-Jihad Fil Islam written in the 1930s, and followed by a succession of very readable tracts on Sunni Islam in the modern world.

Under Mawdudi’s guidance and with Saudi assistance, in the late 1970s, Pakistan legislated fierce Shariah laws: stoning to death for adultery, beheading for murder, cutting off hands for theft. But Pakistanis are too afraid to execute these laws. Why? Because they are foreign, even if they are Islamic.

In Pakistan nobody has ever been stoned to death or beheaded or amputated, unlike in Sunni Saudi Arabia and Shia Iran. The laws exist only to make Pakistanis feel more Muslim; to separate them from Indians, because otherwise very little does. Like Hindus, however, Muslims are quite good at discrimination. Pakistan has apostatized the Ahmedis, who cannot call themselves Muslim, recite the kalima, or go to mosques. Just like Dalits. In India, the ulema of Deoband and Nadwa pass fatwas asking Muslims to not give starving Ahmedis food or water.

Pakistan discourages Hindu culture—khayal, dhrupad and kathak—but it’s the only culture they have, there being no such thing as Muslim music or dance. That is why Pakistan is a cultural wasteland; that is why Muslims are comfortable in Bollywood. Ghulam Ali and Mehdi Hassan sang to illiterate audiences in Lahore and Karachi who could not identify a raga, because they were taught to deny their own culture. That is why Pakistani singers love India.

Zakat, charity, is one of the five pillars of Islam. It is obligatory, not optional, on Muslims. The Pakistani state debits 2.5% from all Sunni bank accounts (Shias are exempt) in Ramzan and spends it on the poor. In 2004, it collected Rs141 crore. This fell to Rs107 crore in 2008 and to Rs70 crore this year. Why? Sunnis withdraw their cash before Ramzan and then re-deposit it later. Many temporarily declare themselves as Shia. This opportunism is not unfamiliar to Hindus, and will not sit well with the idea India’s Muslims themselves have of their uncompromising beliefs.

Mawdudi’s heir in India is Jamaat-e-Islami’s Syed Geelani of Kashmir.

The Hurriyat Conference constitution promises (liberals, please note) to “make endeavours, in keeping with the Muslim majority character of the state, for promoting the build up of a society based on Islamic values, while safeguarding the rights and interests of the non-Muslims".

But Muslims have failed to build “a society of Islamic values", there being no such thing, or give equality to Hindus and Christians.

South Asian Muslims pine for more Islam but once they get it, like they have in Pakistan, they don’t know what to do with it because they’re not Arabs.

Pakistanis keep succumbing to dictatorship because of their identity crisis. Mawdudi’s Islamic state is utopian but deliverable only by a dictator. And so all coup-making generals are welcomed on arrival by Pakistanis.

Indian and Pakistani Muslims love Arabs, and Urdu papers are marked by an obsession with Palestine and Jews. India’s Sunnis and Shias were also once loved by Arabs and Persians. For centuries under the Mughals, Haj ships leaving from Surat funded the tribal economy of the Hejaz. Lucknow’s Shias funded Iran’s waterworks till the 19th century.

But then both nations discovered oil, the Saudis in 1938 and the Persians in 1908.

Now their per capita income is six times that of ours. The love is gone, and we are irritants, not one of their own.

A Pakistani acquaintance of mine, a retired colonel from Musharraf’s batch, discovered this during the siege of Mecca in 1979. The Saudis imported soldiers of many nationalities, some from the West, to retake the Kaaba from fanatics. A Saudi peasant inquired about Iftikhar’s identity. “I’m Muslim," Iftikhar announced proudly. From where, asked the Saudi. “Pakistan". Where’s that, the peasant asked. Iftikhar explained the geography. The Saudi finally understood: “Hadha Hindi!" he thundered, using the Arabic word for both the people of the subcontinent and those who follow its faith.