In 1999, when the Total Sanitation Campaign was launched, the government started setting aside funds for information, education, and communication (IEC) to convince people about the importance of latrine use. Yet, as the first part of this series discussed, it is still common for rural Indians to defecate in the open despite having a latrine.

Why has the money spent on IEC not translated into behaviour change?

Our study of two villages, one each in Uttar Pradesh and Rajasthan, offers some clues. These villages showed the greatest improvement in latrine coverage since 2014-15 in districts where the IEC spending per open defecator in the last year was at least five times the state average.

Hardly anyone accountable for IEC

One of the reasons why behaviours haven’t changed is because not much IEC has happened, even in places that appear successful on paper. Indeed, IEC spending nationally was only 2% of construction spending in the past year. The ‘Sanitation Sena’ that policymakers called upon in the initial days of the Swachh Bharat Mission (SBM) to convince people to use a latrine was absent in the two villages we visited and in many others. District coordinators are the lowest-level full-time staff working on sanitation and they can’t possibly visit every household that defecates in the open. One of them even told us that he is often given tasks for other schemes such as the Indira Awas Yojana.

The little that does get spent on IEC is contracted to non-government organizations (NGOs) and firms in many places. Officials in Uttar Pradesh say that IEC activities for thousands of villages were outsourced to just a handful of NGOs and insinuated corruption in both the award and executions of these contracts. In the words of a district coordinator, “Latrine use gets promoted [only] on paper."

IEC messages are all wrong

Even when IEC funds are spent, they often fail to address SBM’s aim—to increase latrine use. While most households interviewed had heard about the SBM, only 7 thought it had something to do with latrines, and only 2 knew it aimed to eliminate open defecation. The remaining believed it was about cleaning roads, ditches, schools or houses. In 21 out of the 29 households surveyed, an official—usually the village head—had talked about latrine. But most of those visits were to inform the household they would receive a latrine, or money to build one. Only 6 of these in-person interactions addressed something beyond latrine construction. None addressed the reasons why people prefer defecating in the open in the first place. 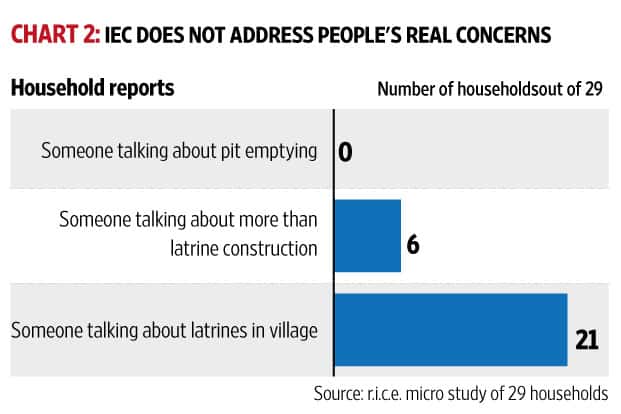 Most households believed that simple latrines, like those promoted by the government, are not worth using because they fill quickly and require frequent emptying. Emptying a pit latrine carries the stigma of manual scavenging in India. So, people aspire to build large latrines that will never have to be emptied even after a generation. Because these are expensive, many people choose to defecate in the open until they can afford one. In most other developing countries, however, it’s common for people to use simple latrines.

Many respondents believed that defecating in the open is healthier. One villager explained, “Using a latrine makes your body weak… (and) is injurious to health. People in cities who have latrines in their houses have to take medicines often." These findings are not unique to these two villages. A London School of Hygiene and Tropical Medicine study that evaluated the Total Sanitation Campaign in Orissa found that beliefs in purity and pollution hindered latrine use. Similarly, researchers from JNU and r.i.c.e. conducted a study using a large nationally-representative dataset and found that households who live in villages where more of their neighbours practice untouchability are more likely to defecate in the open. A qualitative study conducted across rural north India and the Nepali Terai found that cultural norms about purity and pollution contribute to widespread open defecation. Thus, open defecation persists in rural India not because of a lack of infrastructure, but because of unique cultural practices concerning ritual impurity, and a history of caste and untouchability.

Can the SBM be saved?

So far, the SBM has done nothing to address people’s real concerns about latrine use. In order to have even a chance at a success, the SBM needs to admit that the persistence of open defecation has a lot to do with the persistence of untouchability.

Unfortunately, we live in a society where untouchability is still commonly practiced despite the Untouchability Offences Act being passed more than 60 years ago. Trying to change attitudes on caste is perhaps an even more formidable challenge than trying to reduce open defecation. That, however, is no excuse for not trying.

At the same time, government officials should be talking about what happens when latrine pits fill up and who empties them. Even though the technology promoted by the government, the twin-pit latrine, allows the household to give a full pit time to decompose before emptying, hardly any villager understands this process or thinks that emptying a decomposed pit is any different from emptying a pit that has not decomposed. Although the Manual Scavenging Act of 2013 is clear that emptying decomposed pits is not manual scavenging, villagers nevertheless see it as such.

The SBM needs to both help rural Indians understand how twin-pits work, and address how the well-being and rights of Dalits who may be tasked with emptying latrine pits will be protected. Indeed, any credible plan to truly eliminate open defecation within the next four years requires doing both.

Nikhil Srivastav is Research and Policy Manager and Sangita Vyas is Managing Director for Sanitation at r.i.c.e.

This is the second of a two-part series on Swacch Bharat Mission based on a micro study conducted by researchers at r.i.c.e. Part I talks about SBM not increasing latrine use.