A driver who works for one of the chief executive officers at Marico Ltd, the consumer products company that makes edible oil Saffola among other things, now has his son working for the same firm. The young boy is an officer in the finance department of the company. Another young girl from an extremely conservative and poor Muslim home is part of the production team at a Hindi news channel. When her older brother was driving a police officer’s car in the Capital, she was graduating in journalism from Jamia Milia in New Delhi. 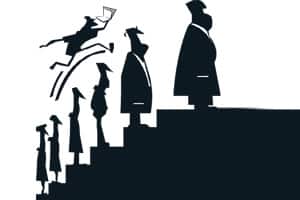 Yet others say it is more like multiple classes of consumers being present in the same household. So such households could be called “dual-class" homes. According to Milind Sarwate, group CFO, Marico Ltd, there may not be any more “a one-to-one correspondence between households and SEC classification. Viewed positively, this is in fact class expansion and not compression".

While there have been instances of such movement across generations, what’s new is that process of class compression or expansion—whatever you may like to call it—has been accelerated. It is in plenty and pervasive.

Several factors are responsible for the widespread change. For a start, there is a visibly higher emphasis on education across SECs.

B. Narayanaswamy, consultant with the global market research firm Ipsos, recounts how he has been helping the lower income group employees in his organization and elsewhere with school admission applications for their children. They need help to navigate the Web, print the application forms, fill them, get salary certificates and much else. He views it as being a witness to “newer social phenomena and anxieties" where domestic workers, peons, auto-rickshaw and private car drivers are not only educating their children but also spending a lot of money on tuitions.

Not surprisingly, in one of its earlier surveys rural marketing agency MART also found that the expenditure on tuition among rural households is growing. Sarwate interprets it as the continuation of the trend where “striver parents" overlook personal needs and desires to invest in the education of the next generation.

Education is being complemented by the explosion in job opportunities as well. Entry into what are seen as “white collar" jobs is relatively easy. Roles in sectors such as information technology-enabled services and retail are considered “white collar", by the way. Sarwate feels that even though they may be comparable to a factory worker’s job, these organizations are not factories so there is no blue collar stigma attached to them. The blue collar to white collar colour shift has a lot to do with the buying behaviour of these consumers, he says.

The change has been speeded up by the growing confidence levels among the young across income groups. Even the aspirations across the socioeconomic classes are converging and the dreams are more or less homogenous. Little surprise, then, that the son of a telephone operator wants nothing else but an admission into the National Institute of Design.

How do marketers tackle the increasing number of such dual-class homes? Narayanaswamy says there is nothing special or different about managing these households. It is the underlying phenomenon that drives change. Ultimately, one has to address the consumer behaviour. Clearly, in such households the buying pattern of the younger generation, with greater personal disposable income and peer pressure, would be at variance with the older lot at home. It may be difficult to recognize this duality in a statistical framework though.

To be sure, class expansion in households has its hurdles too. Some parts of India are better attuned to such changes than others. For instance, caste and gender may be major obstacles in some regions.

Yet there is hope. The eight-year-old daughter of Narayanaswamy’s driver converses fluently in English and attends birthday parties at Pizza Hut. (Her parents simply cannot participate with equal social elan). And this may just be a run-up to a better scenario. Some day she may work for, say, IBM.