The great Indian middle class: the promise and the reality

Twenty-five years after economic liberalization, the economic power of the middle class has not matched up to expectations

India’s economic liberalization in 1991 promised the creation of a robust middle class.

“In the early years of reforms in the 1990s, political and business leaders and mainstream media discourses presented sharply inflated figures of a large untapped middle-class consumer market," says the Routledge Handbook of Contemporary India.

International and domestic businesses scrambled to position themselves for a share of the burgeoning new markets India’s developing middle class would provide after the government started liberalizing the economy. Over the past 25 years, successive governments and analysts, stray voices notwithstanding, have continued to propagate this discourse. It now appears, however, that the economic power of the great Indian middle class may be more a myth than reality.

Not poor but not quite middle class. While estimates of the size of the middle class vary significantly, depending on the definition, a large segment of India’s population has benefited. Since India liberalized 25 years ago, millions of people have successfully moved from lower than $5,000 annual income to higher levels, with the greatest increase coming in the past 12 years (see chart 1). 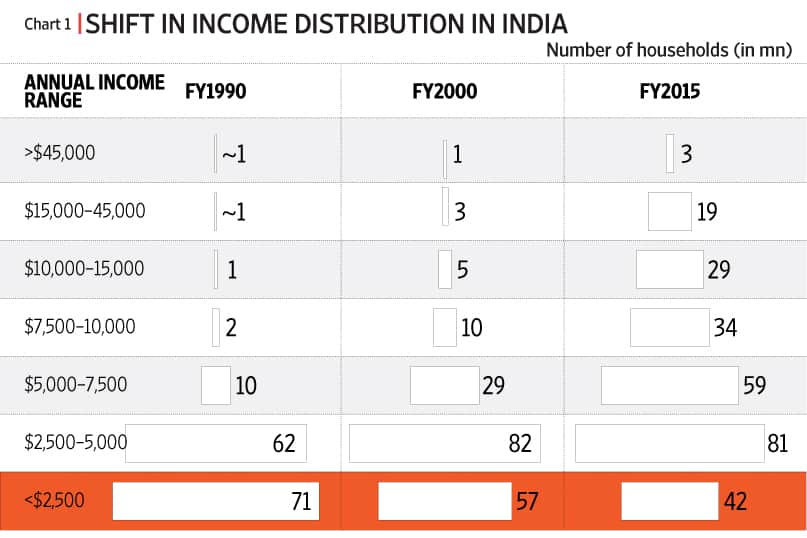 Unlike China, however, which moved more than half of its households out of poverty to annual income levels above $10,000, India has been able to shift fewer than 20% of its households over this mark. Instead, India’s population has primarily shifted to the $5,000-10,000 income level (see chart 2), which is considered vulnerable. 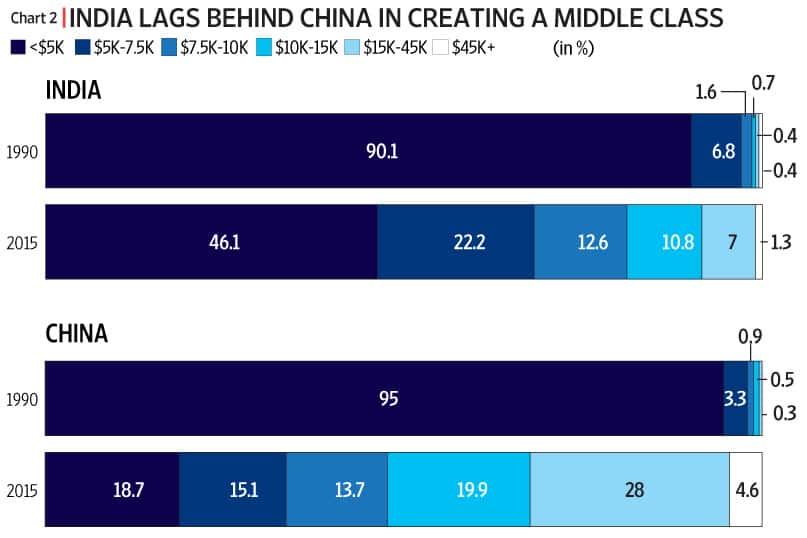 Consumption patterns tend to change ahead of incomes. Even while the size of India’s middle class falls short of expectations, consumption patterns reflect aspirations well beyond income levels. In the decades after liberalization, consumption growth has more than doubled from 4% (1990-2002) to 11% (2003-14). Notably, non-food consumption in India has increased from 53% in 1990 to 69% in 2014, according to Euromonitor data, narrowing the gap with China (74% in 2014) further than income distribution comparisons would suggest. This indicates increased availability of income for more discretionary spending in education, healthcare, recreation, communication and personal products (see chart 3). A number of factors are likely to grow the middle class over the next two decades. First, the proportion of people in the workforce has risen and will continue to rise considerably. By 2030, India will constitute 28% of the world’s workforce with the workers-to-dependents ratio expected to be higher than 2.1 (up from 1.4 in 1990). Second, the country has seen steady urbanization over the past 30 years, bringing a major shift in the labour market from low-paying agricultural jobs to better-paying manufacturing and service jobs. Third, India is one of the few countries with a third-quartile median age of 27 years, which represents a younger, increasingly connected and digitally savvy population. As Internet penetration grows steadily, this demographic is likely to change consumption patterns and see quicker responses to new consumer opportunities.

So, how can companies successfully target India’s growing middle class? There are no easy answers. One of the biggest challenges is the population’s sheer diversity: India’s citizens are a heterogeneous group, geographically spread out and with varied preferences, and most still in the lower-income segment.

To succeed, companies must increase awareness and educate potential consumers to change habits. Consumer goods companies need to increase penetration with the right combination of products, pricing and distribution. Companies must innovate and focus equally on aspirational and affordable products even as they draw from the experience of firms in China and Brazil.

One multinational FMCG firm in China, for example, managed to capture the middle-class market by investing heavily in commercials to create brand awareness long before its products hit the market. It identified different need gaps—for example, the lack of anti-dandruff shampoo and of diapers—and vigorously marketed those products. It also customized products—such as toothpaste with various local flavours—and offered a multi-brand, multi-tier product portfolio to cater to different consumer segments.

Similarly, a beverage company in Brazil created customized, affordable offerings that uniquely targeted the Brazilian market. It reintroduced returnable glass bottles and matched the price of the local brand leader to make its drinks more competitive. It also partnered with a local distributor to accelerate penetration.

Not just consumer products, but healthcare, education, communication and transportation are all poised for consumption growth. Both public and private sector providers need to cater to the increasing aspirations of the new middle-class consumer who wants convenience, quality and variety and is willing to pay an appropriate price for them.

What lies ahead? India and China have been on a similar GDP growth trajectory since the introduction of economic reforms in each country, but India has lagged behind China, given it initiated reforms almost a decade later. Today, India is poised on a key inflexion point: The International Monetary Fund (IMF) expects India’s GDP growth to exceed China’s and that of all emerging markets in aggregate for the remainder of the decade. Such momentum, along with an increasingly technologically savvy, young, urban working population, will create a growing and increasingly secure middle class. How companies address this opportunity will determine whether or not the promise of India’s middle class remains a myth or becomes a reality.