Kochi: The spectre of cancer is gripping Kuttanad, a water-logged rice bowl in central Kerala that is home to about 1.8 million people and where roughly 15,000 tonnes of chemical fertilizers, 500 tonnes of insecticides and 50 tonnes of fungicides are used annually at a cost of about Rs6 crore.

Local doctors, farmers and sundry organizations have demanded that a thorough scientific study be undertaken to assess the incidence of cancer in the area. And doctors confirm that 499 patients have received treatment at the radiotherapy department of the Alappuzha Medical College Hospital between January and May, against 355 during the same period last year and 300 the year before, mostly from the Kuttanad belt.

“It may be too early to come to any conclusion, but there is something in the air," said Aravind S. Anand, assistant professor in the radiation and oncology department of the college hospital, while admitting that there hasn’t been any scientific study of the incidence of the often fatal disease. “The rising incidence of cancer cannot be pointed to the use of pesticides now. There is a time lag. Pesticides or fungicides responsible for causing cancer may take 5-10 years to show the symptoms of the disease." 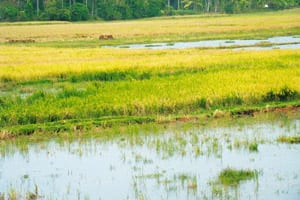 Overdose: A rice field in Kuttanad. Roughly 15,000 tonnes of chemical fertilizers, 500 tonnes of insecticides and 50 tonnes of fungicides are used annually at a cost of about Rs6 crore in the area. Ajayan / Mint

Preliminary investigations by the radiology department of the hospital and by voluntary organizations point to cancers of the intestines, lips, blood, urinary bladder and skin. The numbers could even be higher because of the stigma attached with the disease, which causes families to hide the fact, and in some cases to ignore it because of the high cost of treatment, Anand said.

“There is the urgent need for studies to look at the overuse of these pesticides in the area and take steps to control the use and fix safe limits," he added.

Roughly 28,000 ha of land, spread over the three districts of Alappuzha, Kottayam and Pathanamthitta, is under rice cultivation in the Kuttanad bowl. Cultivation is dependent on the sea, which flows into the land and washes the land when it recedes. A bund, or embankment used to control the flow of water, has been built to prevent saline seawater from entering the fields during the farming period.

Since it is wetland ecosystem, weeds and insects are common, in turn leading to indiscriminate use of pesticides and chemical fertilizers. Incidences of plant diseases and resultant crop failures have been high, said K. Kusumam, project director of the Centre for Pest Management in the area. But people are now conscious about the health hazards of such chemicals and the Centre is implementing an integrated pest management programme in the area, she added.

Banned pesticide such as endosulfan, which left a trail of deaths in the 1980s and 1990s after being sprayed in the cashew plantations at Kasargode in northern Kerala, are not being used in Kuttanad, she said.

In Kuttanad, she pointed out, the spraying of pesticides and fungicides is highly unscientific and only 5% is targeted on the pest. The rest seeps into the water which remains stagnant until the bund is opened after six months.

New generation chemicals are to be used which have very low levels of toxicity, and there has to be controlled droplet spraying targeting the pests, she said, emphasising the need to reconsider farming practices.

Kerala agriculture minister Mullakara Ratnakaran said last week that he has taken up the matter with state health minister P.K. Sreemathi. “Initial reports in the area point to the use of pesticides coming down drastically. The incidence of cancer could be the result of high dosage years ago but we can’t afford to take any risk," he said.

In February, students of the social work department of St Gregorios College of Social Science, Parumala, in Pathanamthitta district, doctors from St Gregorios International Cancer Care Centre and the Kuttanad Vikasana Samithi, a not-for-profit that works on sustainable development for the area, organized four camps to study whether cancer was an increasing problem in the Kuttanad region, said Ligin Philip, a St Gregorios College teacher who convened the camps.

However, only 250 people, of whom five were patients and seven were suspected of having some form of cancer, attended the camps, a clear indicator of the reluctance to face the issue.

Salim Kumar, owner of the Agro Sales Corp. in Alappuzha town, said he had also noticed a drastic drop in use of pesticides. “People are becoming conscious about the perils of insecticides and prefer the green poison triangle pesticides, considered safest as against the deadly red triangle," he said over the phone. “But the issue is overdose of these pesticides and also going in for cheap varieties with immediate solution when there is a massive pest or fungal attack."

However, switching to bio-fertilizer based organic farming is impossible, said Thomas P., a priest and executive director of the Kuttanad Vikasana Samithi, a voluntary organization for the development of the area involving around 15,000 farmers. Instead, he said, there has to be a cycle with one for paddy to be followed by pisciculture in which one could rear grass carp that eats the grass and stubble left after farming. In turn, fish waste and feed can be used as manure for the next crop, creating an interwoven cycle that would enhance the bio-fertility of the region.