The Narendra Modi bounce is imperceptible across Rajasthan, Madhya Pradesh and Chhattisgarh a 'Mint' analysis of the assembly election results shows

New Delhi: As the dust settles on the Congress celebrations, the post-mortem begins for the Bharatiya Janata Party (BJP). Several different factors are being blamed for BJP’s defeats in Rajasthan, Madhya Pradesh, and Chhattisgarh. Some are blaming the effect of the wane in Prime Minister Narendra Modi’s appeal while others are crediting a Rahul Gandhi-led resurgence. A Mint analysis suggests that both effects may have played a role in the assembly election results.

Ahead of these assembly elections, both Prime Minister Narendra Modi and Rahul Gandhi, the Congress president, traversed the five states on behalf of their parties. (charts 1A and 1B) In the two-month period before voting in three Hindi heartland states where BJP and the Congress were the main competitors, Narendra Modi attended 29 rallies covering 53 constituencies.

Unsurprisingly, these rallies increased in frequency as the voting day approached. More than 80% of rallies for both leaders occurred in the fortnight before polling with Modi rallies exclusively happening during this period. As political scientists Sanjay Kumar and Pranav Gupta have highlighted in an earlier Plain Facts column, the final few days of an election campaign are most crucial in convincing swing voters. (chart 2) 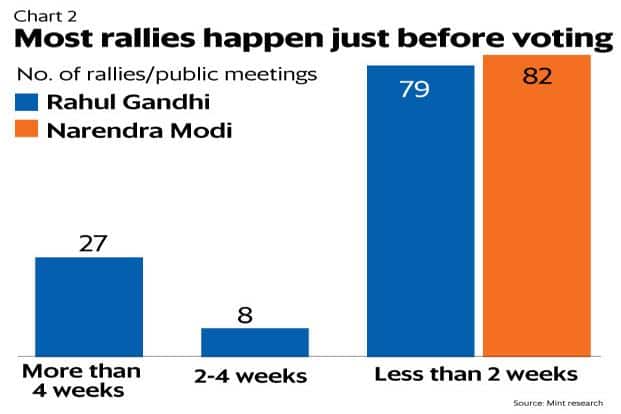 In the 42 constituencies visited only by Rahul Gandhi, a little less than half elected the Congress, while in the 29 constituencies just visited by Modi, a third elected the BJP. However, seat victories could be a result of other factors beyond just the presence of a national leader.

Often local or regional factors have a strong influence on assembly election results. Hence, a better approximation of rally influence would be to examine how vote-shares changed in constituencies compared to changes in district and regional averages. Based on this metric, Gandhi seems to have had a bigger impact in raising his party fortunes compared to Modi.

Gandhi’s relative success in boosting party fortunes is a significant change compared to Karnataka elections earlier this year. In stark contrast to Gandhi, Modi’s impact on constituencies he visited seems much weaker compared to the past.

The average vote swing in constituencies that Modi visited was lower than the average swing across the respective regions of those constituencies, the analysis shows. (charts 3A and 3B) 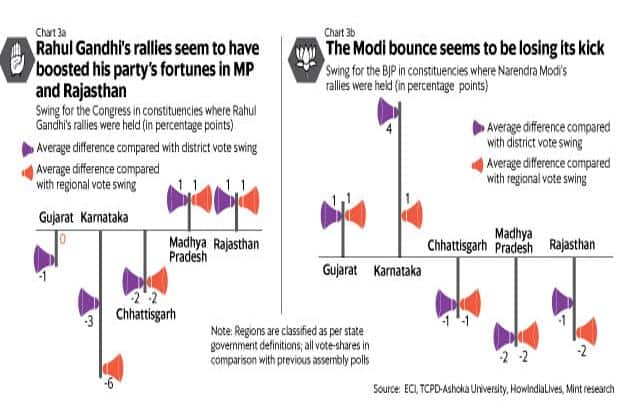 In both Gujarat and Karnataka elections, Modi had much greater success in boosting party fortunes, with constituencies visited by Modi witnessing higher vote swings compared to their regional counterparts. The Modi appeal may finally be weakening.

Data from successive rounds of the Lokniti-CSDS Mood of the Nation surveys , also show that Modi’s popularity has waned over time although he still remains the most popular leader in the country.