New Delhi: The promise of raising up to Rs40,000 crore in revenue from the auction of spectrum for third generation, or 3G, mobile services has prompted the department of telecommunications, or DoT, to put policy changes regarding second generation, or 2G, services on the back burner. 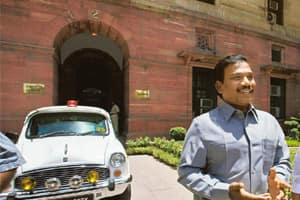 Mobile services: Communications minister A. Raja has said that the 3G auction is a priority and would take place this year. Vijay Verma / PTI

Recommendations made by the spectrum committee on 2G services are expected to be approved and incorporated with some modifications later this year, but only after the 3G auction is completed, said a senior DoT official.

The committee’s report will be studied by the Telecom Commission only in September, after the Congress-led government completes the first 100 days of its second stint, said a second DoT official.

Both officials spoke on condition of anonymity because they are not authorized to speak to the media.

Experts say the priority accorded to 3G risks setting back the roll-out of basic mobile telephony services in a country where only 38 out of 100 had a mobile connection as of April, despite the number of subscribers surging to 400 million.

The spectrum panel has recommended the auctioning of 2G spectrum in line with market rates, trading and sharing of spectrum among operators, and a uniform spectrum charge of 3% instead of the 2-5% of adjusted gross revenue paid currently.

“The government will give part of the report that requires the approval of Trai (Telecom Regulatory Authority of India) to them. They take around 60 days, after which recommendations will be made to the Telecom Commission for approval," the second official said.

The spectrum committee comprised representatives of the government, Trai, telecom technology experts and industry executives. It studied a number of 2G spectrum issues that the government has been criticized over.

The government expects to raise Rs20,000-40,000 crore from the 3G auction. The money is needed to augment revenue and fund development programmes at a time when India’s fiscal deficit has grown to an estimated Rs3.6 trillion in the year ending March.

Minister of communications and information technology A. Raja said when he took office for a second time that the 3G auction is a priority and would take place this year “within three months of the government’s approval". “For the spectrum committee report, we will ask for the Trai recommendations, if needed."

The issue was further complicated with the Planning Commission, the department of industrial policy and promotion, and the telecom ministry opposing the price doubling. The cabinet then decided to form a group of ministers (GoM) that met once before the general election.

The government will announce the final 3G reserve price as well as the total number of 3G licences in next month’s budget, Raja said on Tuesday.

Raja made a presentation to Prime Minister Manmohan Singh earlier this month asking that the 3G auction proposal be forwarded to the cabinet again for approval without the formation of a new GoM to consider it. The ministries have solved their differences over the matter, he said.

“If this happens, then the 3G auction could be done by November," the DoT official said.

Among the recommendations by the spectrum panel, the delinking of licences from spectrum is the only recommendation that needs approval from the regulator in line with the Trai Act, the DoT official said.

An operator gets 4.4MHz of 2G spectrum along with a licence for Rs1,651 crore.

The spectrum committee report also talks about the auction of additional spectrum as opposed to the existing regime where the operators would get spectrum based on the number of subscribers they had.

“A number of the operators want the auction of spectrum to be delayed so that they can get as much spectrum as possible under the existing subscriber-linked criteria before they are asked to pay (the) market price for it," one of the DoT officials said.

“We have noticed that when spectrum is broken up into smaller pieces, then it can accommodate fewer number of users," the official said. “To accommodate all the potential users in the Indian market, the spectrum has to be used as efficiently and as consolidated as possible."

Analysts say the recommendations of the spectrum committee are more pressing than the 3G auction from the telecom sector’s point of view.

“The main focus of the operators at present is rolling out of voice services throughout the country and a delay of 3G services is okay for them. 3G is mainly for data services and using 3G for voice is a bit of overkill," said Rajat Kathuria, professor at the Indian Council of Research on International Economic Relations.

“The 3G auction is being pushed more out of revenue concerns of the government," Kathuria added. “It is better from the market point of view to resolve the 2G legacy issues and allow for consolidation and increased efficiency of existing mobile telephone services. We are not really in dire need of 3G services in India just as yet."