Akanksha Mohan from Ghaziabad, a satellite city bordering Delhi, had been counting on an education loan to finance her studies abroad. So when the University of Salford, UK, offered her a bursary, or grant, that knocked off £2,000 (Rs1.54 lakh) in tuition fees for a one-year master’s course in corporate finance, she was delighted. “£2,000 is really very helpful for a student like me," says Mohan, 21, whose parents are teachers. Her course fee has now come down to £7,300. With this, Mohan is sure that getting an education loan from a bank in India will now be much easier. 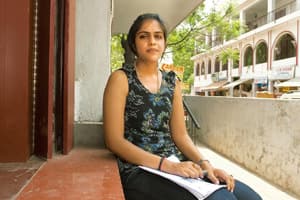 A good deal: Akanksha Mohan received a grant from a UK university that knocked off £2,000 in tuition fees. Ramesh Pathania / Mint

As Indian students seek admission abroad in greater number, universities, especially new entrants in the Indian market, are offering bursaries and scholarships to attract them, reduce the impact of high tuition fees during an economic downturn and increase their visibility and reach.

The University of Salford says Mohan’s bursary was part of a system of awards to help students from certain countries study there. “From September 2010, the university will introduce a new bursary and scholarship scheme which would aim to offer students from certain countries a small bursary to reduce the impact of the tuition fees (especially in the current economic climate), with a more substantial scholarship being offered to academically brilliant students," says Jeremy Burgess, senior international officer at the university.

Though bursaries are offered automatically to students from certain countries and scholarships are based on academic record, both forms of financial aid help universities attract international students, a substantial source of revenue.

“On the whole, they (UK universities) want Indian and Chinese students to pay. That’s where they get the money," says Abhinav Ramnarayan, 26, who completed a master’s programme in print journalism from The University of Sheffield, UK, in September on a scholarship. He is currently training with the Guardian newspaper in the UK.

In his case, says Ramnarayan, a 50% waiver in the £10,660 tuition fee was a clinching factor in his decision to join the master’s course. Ramnarayan’s top rank in his undergraduate exams in English literature from Loyola College, Chennai, helped him get the scholarship.

Universities are even joining hands to offer scholarships. This year, 17 Scottish universities have come together to offer 200 master’s level scholarships of £2,000 each to students of four countries, including India, under Scotland’s Saltire scholarship scheme.

Counsellors who guide students for admission abroad say it is important that students do not hesitate to ask what’s on offer.

The United States-India Educational Foundation, or USIEF, advises students to start research on financial aid early and not be shy about asking for it. “To increase your chances of success, you should demonstrate that your academic qualifications are first rate, study hard for standardized tests, show that you have some private funds or show your financial need and send in a neat, complete and well-researched application," said USIEF education advisers Rupali Verma and Yukti Jaiswal in a reply to an email.

Scholarships in the US vary according to college, university and department, level of study and sometimes, from year to year, depending on the availability of funds. Kunal Oberoi, chief executive, Education Link, a company that represents many UK universities in India, has seen his list of clients jump to 40 this year, a 15-20% annual growth. Oberoi, whose company guided Mohan in her admission, says he advises clients to offer scholarships and makes it a point to tell students about them, too. “Scholarships is (are) one of the ways they can attract students," he says.

Universities say scholarships help popularize the courses on offer but are not the only factor in attracting students. The University of Sheffield lists extensive fee waiver offers for international students from countries including India, China and South Africa.

“The University of Sheffield’s popularity in India has increased in the last few years," says spokesperson Lauren Anderson. “The extensive scholarship package, specifically on offer for Indian applicants, has played a part in that."

Also go through the guide