New Delhi: The Central Bureau of Investigation (CBI) booked cases against five companies for suspected irregularities in the controversial allocation of coal blocks and conducted raids in 11 cities on Tuesday, as the government swung into damage control mode over an issue that has triggered a political logjam in Parliament. 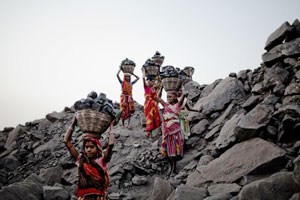 CBI acted on a day the government, seeking to recover lost ground, announced its intent to provide a quota for backward classes in government job promotions.

Parliamentary proceedings have been paralysed with the main opposition Bharatiya Janata Party (BJP) demanding Singh’s resignation after the Comptroller and Auditor General of India, the government auditor, said in a report released on 17 August that the allocation of coal blocks—instead of an auction—had resulted in a notional loss of ₹ 1.86 trillion to the treasury and alleged irregularities in the process.

“The government is trying to refurbish and salvage its image," said political analyst Sandeep Shastri, pro vice-chancellor of Jain University and director of the International Academy for Creative Teaching in Bangalore.

“Any political observer would concede that it is trying to win (back) lost ground," he said. “However, past experience shows that it does not help much because citizens are aware of such tactics."

“The cases have been registered in connection with the allegations related to getting coal blocks allocated on the basis of misrepresentations and false claims in the applications, presentations and connivance and lack of due diligence on part of public servants," CBI said in a statement.

According to a senior agency official, AMR Iron and Steel, JAS Infra and JLD Yavatmal have the same promoter.

“All three companies misrepresented (information) about the associate companies; they lied in the application that they were never allocated coal blocks before. They hid this information from the screening committee," said a CBI official on condition of anonymity. They already had six coal blocks allocated, but never started work there, he said.

The CBI release also questioned stake sales by some of the companies. “Promoters of some of these companies have allegedly sold their stakes in an irregular manner after allocation of coal blocks," it said.

The coal block allocation scandal could mean a drag on the financial markets and may deter foreign investors.

“The coal scandal is even bigger than the 2G one. For a foreign investor, coming after the telecom scam, it can break the faith in the country," said Arun Kejriwal, a director in Mumbai-based firm Kejriwal Research and Information Services Pvt. Ltd.

Most of the five companies said they did not have an immediate comment on the allegations made by CBI.

A Mint reporter in Kolkata confirmed the raid on Vini Iron and Steel in upmarket Camac Street, in an office building that didn’t bear the name of the company.

A security guard told the reporter that Vini Iron and Steel had an office there some years ago, but that it had been sold off.

No contact details or email addresses of JLD Yavatmal and RKM Powergen could be found to reach them. A spokesperson for Visa Power refused to comment on the issue, while a senior official at Vandana Vidyut said he was not the official spokesperson and hence could not comment.

Another senior CBI official said the number of cases could go up to 10 in the near future.

“We started with 24 companies. So far we have registered FIRs against those companies against which we found prima facie cases and material evidence. These companies deliberately misrepresented facts or gave false documents," the senior official said on condition of anonymity. “Unlike the 2G scam, we have not reported any loss figure in the FIR. Now we will investigate the conspiracy to get these coal blocks."

He added that some companies were given coal after they formed a consortium on the directions of the screening committee.

“Till now, we have not found any wrongdoing on the part of any other joint venture company," the official added.

CBI has yet not unearthed any money trail or transactions hinting at money laundering.

The leader of the opposition in the Lok Sabha, Sushma Swaraj, on Tuesday told BJP workers that the party will continue its protests until the allotments of coal blocks are cancelled and auctions are announced.

“We will continue our protest till these allocations are cancelled. Government must announce an auction to prove that the money out of previous allocation has not gone into the kitty of the Congress party," she said.

Coal minister Sriprakash Jaiswal said the action taken by CBI was an indication of the government’s resolve. If the companies that had been allocated the coal blocks hadn’t achieved the milestones they had committed to, the government could take action on the recommendations of an inter-ministerial group (IMG), he said.

“If the companies have not achieved the milestones, then the IMG is there. Whatever steps the IMG suggests, including de-allocation, cancellation of bank guarantee, will be taken," he said. The minister said 26 coal blocks have been de-allocated since the policy of allocation came into force in 1993.

In another move also seen as a piece of political strategy to divert attention from the ongoing controversy, the Union cabinet at a meeting on Tuesday cleared a proposal to provide a quota for scheduled castes and scheduled tribes (SC/STs) in government job promotions. The move will require certain constitutional changes.

According to a minister who attended the meeting, the cabinet cleared a constitutional amendment that will replace article 16(4)A that gives powers to the state for providing reservations for SC/STs.

The United Progressive Alliance (UPA) government is likely to introduce the Constitution amendment Bill on Wednesday. The ongoing monsoon session is to be concluded on 7 September.

Members of Parliament belonging to SC/STs and parties such as the Bahujan Samaj Party (BSP) have demanded that the government introduce an amendment to ensure promotions for SC/STs in government jobs.

The Samajwadi Party, which is in power in Uttar Pradesh, has opposed the move, saying the benefit should be extended to other backward classes as well. Prime Minister Singh had promised the provision of a “legally sustainable" solution to the demand raised during an all-party meeting on 21 August.

BSP chief and former Uttar Pradesh chief minister Mayawati urged all political parties to back the Bill. “We want to request for a voting on the Bill in this session and request NDA (National Democratic Alliance) to help us in this. We want UPA also to appeal to NDA to help us pass this Bill," Mayawati, who met BJP’s Arun Jaitley and Swaraj on Tuesday, told reporters.

Apparently with an eye on the forthcoming state elections, the cabinet also cleared an amendment to article 371 of the Constitution to grant special status to some backward districts of Karnataka.

If the legislation wins passage, it will help provide reservation in education and employment for the people of these districts, and help in their economic development with a special focus on infrastructure. Karnataka is due to elect a new assembly in 2013.

Viswanath Pilla in Hyderabad, S. Bridget Leena in Chennai, Shamsheer Yousaf in Bangalore, Maulik Pathak in Ahmedabad, Aveek Datta and Zahra Khan in Mumbai, and Manish Basu in Kolkata, and PTI contributed to this story.