New Delhi: Prime Minister Narendra Modi has asked for a list of highway projects that are stuck because of environmental and forest clearances, signalling his intention to revive growth in the sector.

The roads ministry has prepared a list of 22 such projects worth some ₹ 20,000 crore that the environment ministry and the National Board for Wildlife have to clear. Modi will review it in a meeting expected this week, a roads ministry official said, requesting anonymity.

The projects awaiting clearance include the Krishangarh-Udaipur section of National Highway (NH)-8, Rampur-Kathgodam on NH-87, Gwalior-Shivpuri on NH-3 and Panvel-Indapur on NH-17.

It takes 12 to 15 months for an environmental clearance, 1-2 years for a forest clearance and more than three years for projects passing through wildlife sanctuaries, the roads ministry estimates.

“We are looking to bring this to the notice of the prime minister in the review meeting and explore a single-window approach for all linear projects to minimize time taken for getting these clearances," said an official at the National Highways Authority of India (NHAI). He too declined to be named.

“The procedure for getting these clearances, especially wildlife and forest clearances, is rather complicated and long," he said. “We would propose looking at ways to streamline and reduce these steps."

Roads minister Nitin Gadkari has gone a step further and asked officials to estimate the “economic and financial loss" caused by these delays, the first official said. “NHAI has been asked to look into the matter," he added. 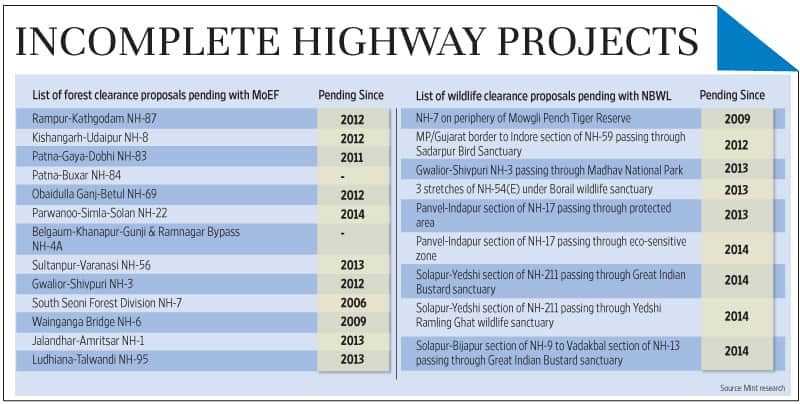 “Nearly half of all NH PPP projects are stressed. These cumulate to about ₹ 85,000 crore of project cost, according to the concession agreement. The financed cost would be higher. About half of these projects are impacted due to delays in land acquisition, right of way, and environment clearances. Several EPC (engineering, procurement and construction) projects are also similarly impacted," said Manish Agarwal, leader, infrastructure, at consultancy firm PricewaterhouseCoopers India.

“Addressing hurdles in clearance is a necessary first step to get things moving in the road sector. Fairly large amount of money is stuck in these projects. If the required forest and environment clearances are secured, then projects can be completed and capital released for new projects," he added.

The roads ministry will also present a summary of goals, bottlenecks and its wish-list to revive the sector at the forthcoming meeting with Modi.

The roads sector has been marred by a severe slowdown over the past two years on account of delays in clearances, the economic downturn and cautious lending by banks.