New Delhi: Imagine one billion Indians connected to the Internet by 2020. Is that a realistic target or unattainable? Let’s take a look at the numbers today: As of December 2015, India had around 330 million fixed and mobile Internet subscriptions translating into approximately 391 million unique Internet users. Telecom advisory Analysys Mason’s proprietary market forecast model predicts that market forces will lead to around 400 million new fixed and mobile data subscriptions by 2020, translating into a total of approximately 746 million unique Internet users. This still leaves 254 million unconnected, for the 1 billion target.

Reaching the 1 billion milestone will necessitate significant commitment and investment by key stakeholders (such as the government, operators, consumer Internet companies and technology companies). This is the context in which the report How to Get a Billion Indians Online by 2020 is set and covers some important issues that need to be addressed to ensure a billion digital Indians by 2020.

Over the past two years, the number of mobile Internet subscriptions has increased from less than 220 million in December 2013 to about 310 million in December 2015. This growth has primarily been driven by increasing 2G/3G data network coverage, more affordable smartphones (with 3G smartphones available for ₹ 3,000), improved specification of devices (5-inch plus screen, more than 1GB RAM, enhanced processing power, etc.) leading to a better Internet experience, and most importantly, growing ado-ption and regular usage of multimedia-based entertainment services (such as YouTube, Hotstar and Saavn) and social networking and messaging services such as Facebook and WhatsApp. Entertainment-based multimedia services account for about 40% of data consumption: more than 60 million unique YouTube users as of March 2015; Hotstar reported more than 50 million downloads by approximately 41 million viewers in 2015, with an expectation of exceeding 100 million viewers in the ongoing season of the Indian Premier League.

As of March, social networking and instant messaging services account for about 20% of wireless data consumption. Facebook had about 142 million users in India, of which around 133 million access the social network through mobile devices; WhatsApp has reported more than 100 million active users in India. The proliferation of these services has driven the adoption of Internet in the country over the past three-four years. Future growth in mobile Internet subscriptions looks set to be even faster than in the past few years.

The report also lists out various challenges that are restricting Internet adoption in the country. These include:

—Limited number of towers connected through fibre. Currently only 15% connected

—Lack of alternative means of Internet access (such as fixed infrastructure, cable and Wi-Fi)

—NOFN limited to connecting gram panchayats with no clarity on access

—High spectrum cost eating up operators’ corpus, which could have been used to expand 3G and or deploy 4G services. —Lack of successful mass-market e-services such as e-health, e-learning/education etc.

—Device and service affordability for a large section of the population

—Awareness of benefits/use cases of Internet

—Backhaul connectivity may be eventually addressed by the NOFN. Its deployment has been badly lagging targets, but this gap could be solved by public-private partnership models. Yet, clarity is needed on how the last-mile access will be provided.

—Based on global experience and local industry inputs, the report identifies seven access models/initiatives by key stakeholders (operators/ISPs, government and tech companies/corporates) that could address gaps for providing affordable access in a business-sustainable, net-neutral manner, which backs up the government’s ambitious Digital India goals. —To identify the most appropriate access model(s) for India, we compared these models on relevant parameters: roll-out speed, government involvement, Internet experience quality, long-term funding sustainability, potential to utilize NOFN/existing infrastructure, and the ease of implementation.

—Comparative assessment of the models shows that the involvement of operators and the government is a must for successfully connecting the digitally unserved/underserved population (254 million additional unique Internet users by 2020). Most likely to succeed are operator-led models of promotional 3G/4G packs, and Universal Service Obligation Fund-based Wi-Fi access using NOFN infrastructure for backhaul. 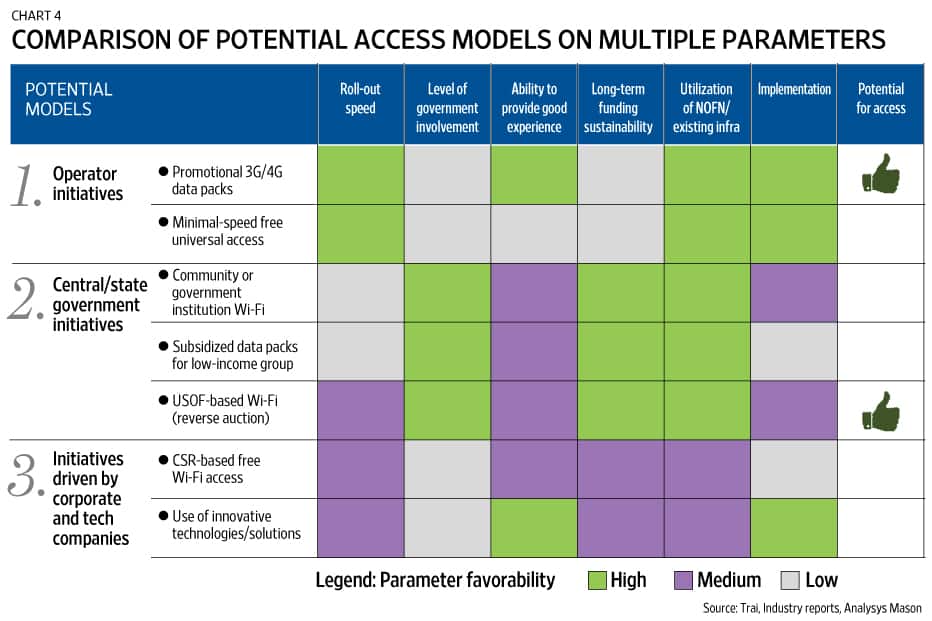 —In addition to improving access infrastructure and ensuring the availability of local-language and mass-market services, a robust content and apps ecosystem will be critical in driving continuous Internet usage. While initial usage by new Internet users will continue to be driven by ‘killer apps’, including entertainment (video and music), social networking and instant messaging, a billion connected Indians will present many opportunities for Internet/online services companies for a range of basic livelihood services such as e-learning, e-health, e-payments, e-commerce and e-governance.

TiE (The Indus Entrepreneurs) in partnership with telecom advisory Analysys Mason released a report, ‘How to Get a Billion Indians Online by 2020’, at TiE’s India Internet Day on 29 April. Mint is the exclusive partner for this #BillionOnline project, report and panel. The full report can be read here