Athens: The Greek government told rebellious lawmakers on Saturday to back a deeply unpopular EU/IMF rescue in parliament or send the nation down “an unknown, dangerous path" to default and international economic isolation.

Officials hammered home the message that Greece’s future in the euro was at stake, and dismissed any suggestion that leaving the common currency offered an easy way out of Greece’s more than two year crisis. 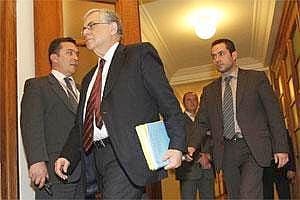 However, six members of his cabinet have already resigned over the deep austerity measures which the European Union and International Monetary Fund are demanding as the price of the funds, which Greece needs by next month to avoid bankruptcy.

“The consequences of disorderly default would be incalculable for the country - not just for the economy ... it will lead us onto an unknown, dangerous path," deputy finance minister Filippos Sachinidis said.

In an interview with the newspaper Imerisia, he described the catastrophe he believes Greece would suffer if it failed to meet debt repayments of €14.5 billion due on 20 March.

“Let’s just ask ourselves what it would mean for the country to lose its banking system, to be cut off from imports of raw materials, pharmaceuticals, fuel, basic foodstuffs and technology," he said.

Late on Friday the cabinet approved the draft bailout bill and a plan to ease the state’s huge debt burden which has deepened the nation’s political and social crisis and brought thousands out on the streets in protest.

PROTEST ON THE ACROPOLIS

As a 48 hour protest strike went into its second day, about 50 Communist party activists draped two huge banners on the ramparts of the Acropolis, reading: “Down with the dictatorship of the monopolies (and the) European Union".

Government spokesman Pantelis Kapsis acknowledged that parliamentary deputies, who face elections possibly as early as April, were under intense pressure of public opinion, but said they still had to save the nation by voting for the bill.

“Tomorrow, deputies will be called upon to bear a heavy burden under intense pressure from society," he told the state TV channel NET.

Analysts expect parliament to pass the package, which involves heavy pay, pension and job cuts, on Sunday after a parliamentary committee discusses it on Saturday.

However, the political situation is unstable and a number of lawmakers have said they would vote against it. The smallest party in the coalition, the far-right LAOS, quit the government on Friday, ordering its four cabinet members to resign. Two members of the Socialist PASOK party have also quit the cabinet.

Kapsis said Greeks faced a hard decade and rejected any suggestion that leaving the euro might be an easier option.

“Staying in the euro zone requires discipline for 10 years," he said. “It is at such difficult moments that nations are put to the test... we must at all costs avoid bankruptcy," he said.

Some economists have suggested that if Greece defaulted and left the euro zone, its new national currency would dive in value and allow the Greek economy to become internationally competitive.

However, Kapsis said: “We’ll have to reduce the deficit, regardless of whether we have the euro or not."

Euro zone finance ministers have told Greece that it must explain how €325 million ($430 million) out of this year’s total budget cuts will be achieved before it agrees to bailout.

The EU and IMF have been exasperated by a series of broken promises and weeks of disagreement over the terms of the bailout, which would be Greece’s second since 2010. They will not release the aid without clear commitments by the main party leaders that the reforms will be implemented, regardless of who wins the elections.

The uncertainty has upset world financial markets, with stocks snapping a five-day winning streak on Friday and the euro slumping as planned wage and pension cuts in Greece hit a new obstacle.

Outside Greece’s parliament, police fired teargas on Friday at black-masked protesters who threw petrol bombs, stones and bottles at the start of the 48-hour general strike against the cuts ordered by the “troika" of international lenders.

But the street protests against the austerity - which many Greeks blame on Germany - were relatively small compared to last year’s mass rallies.

The bill, approved by the cabinet along with hundreds of pages of accompanying documents, sets out reforms including a 22% cut in the minimum wage, pension cuts worth €300 million this year, as well as health and defence spending cuts.

But it does not spell out the exact amount of the bailout, which is left blank. Euro zone officials have said another €15 billion may be needed for the recapitalization of Greek banks after the debt swap.

“The government believes that sustained implementation of this policy programme, complemented by debt restructuring, will put the public debt on a clear downward path," it says in a draft letter to EU and IMF chiefs, attached to the bill.

In the same letter, the government promises to speed up implementation of reforms in the labour, product and services markets, cut spending, and push through a privatization plan.

Papademos, who was parachuted in last November to clinch deals on the bailout and a debt-swap deal, told his cabinet that anyone who did not back the bill had to go.

“It goes without saying that whoever disagrees and does not vote for the new programme cannot remain in the government," he said in televised remarks.

A minister who took part in the cabinet meeting later said the draft bill was approved. The text also lays out the legal groundwork for a debt swap plan in which private sector bondholders will agree to take a real loss of 70% to help bring the country’s debt down.

One of the attached documents, which spells out the reforms Greece will have to undertake in return for the aid, says the target of cutting the debt to “about" 120% of GDP by 2020 from about 160% now will be achieved.