Bangkok: Myanmar dissident Aung San Suu Kyi’s party said it is on pace to win every seat it contested in by-elections on Sunday that may prompt the US and European Union to lift sanctions and end the country’s global isolation.

The National League for Democracy (NLD) won 43 of the 44 seats it competed for and leads in the vote count for the remaining district, spokesman Nyan Win said, giving it representation in the 664-member Parliament that will still be dominated by President Thein Sein’s party. The party didn’t field a candidate for one of the 45 legislative seats up for grabs. 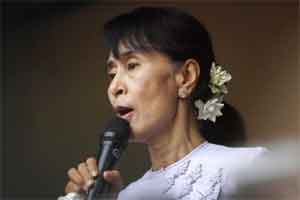 Myanmar pro-democracy leader Aung San Suu Kyi addresses her supporters and the media at the headquarters of her National League for Democracy on Monday. Photo: AP

The vote may open the door for the end of sanctions that prevent companies from General Electric Co. to Standard Chartered Plc from investing in the country of 64 million people bordering China and India. Thein Sein has moved to modernize Myanmar’s political and economic system since taking power a year ago, including a managed float of its currency set to take effect yesterday.

“It’s the beginning of a long process for Myanmar to join the Asian century," said Douglas Clayton, founder and chief executive officer of Cambodia-based Leopard Capital, who plans to raise $100 million for a fund to invest in Myanmar once sanctions are lifted. “There will be very little reason to maintain sanctions after this election is accepted."

US secretary of state Hillary Clinton, who visited the country formerly known as Burma in December, congratulated those who took part in the by-elections while cautioning that reforms could yet unravel. American sanctions ban investment in Myanmar and imports from the country, restrict money transfers, freeze assets and target jewelry with gemstones originating in the nation.

“It’s too early to know what recent progress means and whether it will be sustained," Clinton told reporters in Istanbul on Sunday. “There are no guarantees about what lies ahead for the people of Burma, but after a day responding to a brutal dictator in Syria who would rather destroy his own country than let it move toward freedom, it is heartening to be reminded that even the most repressive regimes can reform and even the most closed societies can open."

“We do expect that the foreign ministers will recognize the changes and there will be a positive signal at the Luxembourg meeting," the spokeswoman, Maja Kocijancic, said on Monday in Brussels. The EU’s sanctions on Myanmar were extended for 12 months a year ago are are due to expire this month.

Hundreds of supporters danced, sang and cheered outside NLD’s Yangon headquarters on Sunday night as party officials displayed results on an electronic billboard.

Suu Kyi, who spent 15 years under house arrest and was awarded the Nobel Peace Prize for her non-violent struggle, boycotted a 2010 election that ended five decades of direct military rule. The next general election is due in 2015, according to Myanmar’s constitution.

Nicole Gaouette in Istanbul and Jones Hayden in Brussels of Bloomberg contributed to this story.