Home > politics > news > CPM to reorient itself, lay out path to revival at party congress

CPM to reorient itself, lay out path to revival at party congress

CPM to reorient itself, lay out path to revival at party congress

New Delhi: The Communist Party of India (Marxist), or the CPM, will lay down a road map for its political and organizational revival at its 20th party congress meet later this week in Kozhikode. 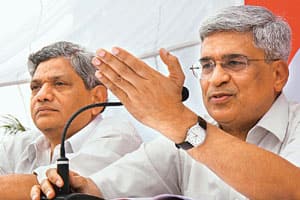 One of the focus areas for this year’s meeting will be the adoption of the crucial political resolution document apart from the ideological and organizational drafts. The cadre-based CPM, which emphasizes on organizational structure and discipline, relies heavily on these documents to guide the party’s functioning.

“The draft resolutions will be the main focus during the upcoming party congress," said Nilotpal Basu, a central committee member of the CPM. “Out of it, two draft resolutions (political and ideological) have already been put in the public domain. Since the organizational document has a lot of detail about the party organization, it will come out only during the party congress."

In the ideological resolution, the party has stressed on fighting against identity and caste politics, apart from criticizing China’s development model that it says led to “new problems and disturbing trends" in a commodity market economy.

The CPM’s previous ideological resolution, adopted in 1992, was in the backdrop of the disintegration of the communist Soviet Union a year earlier. The party had criticized the fall of the Soviet Union in its resolution.

Political analysts say the CPM’s electoral losses since its previous party congress and its lack of presence in the northern states will be crucial points of discussion at the meet.

“This is a very significant party congress. They have realized the risk of an electoral representation in the Lok Sabha only on the basis of two states (Kerala and West Bengal)," said Sashi Kumar, chairman of the Asian College of Journalism in Chennai. “The meeting would definitely look at whether they can convert themselves in other states like Uttar Pradesh and Bihar or not."

The CPM faced poll debacles in the 2009 general election and two years later in assembly elections in its bastions Kerala and West Bengal. While the strength of the CPM-led Left parties reduced from 61 to 24 in the 15th Lok Sabha, it faced one of its worst losses in West Bengal after being in power in the state for more than three decades. In Kerala, the party lost the assembly elections by a thin margin.

The political resolution says the “electoral reverses" and making “no substantial advance in any other state" have weakened the position of the CPM and the Left at the national level.

“There have been organizational issues which they have to sort out, whether it’s factional or inner-party issues. There is definitely a problem of communication lapse, the linkage between what the leadership is saying and what the cadre is taking," Kumar added. “Leadership is another issue at both national and state levels. All these issues should figure at the party congress meet."

The party congress will also take up a proposed amendment in the CPM’s constitution to limit the term of the general secretary for not more than three terms.

A similar amendment for secretaries at the state, district and intermediate levels will also be placed at the party congress for adoption.

The CPM, which gave outside support to the Congress party led-United Progressive Alliance (UPA) government till 2008, will discuss the political situation at the national level and issues such as the Planning Commission’s poverty estimates.

“It is precisely this issue of strengthening the subjective factor in the concrete Indian conditions that will engage the attention at the forthcoming 20th Congress of the CPM… The CPM’s 20th Congress is, thus, vested with this responsibility to work out the correct tactical line and lay down the required organizational measures to achieve this historic task in the interests of India and its people," says an article in the CPM’s publication, People’s Democracy, published on Thursday.

Around 800 CPM members are expected to attend the party congress.

Paul Zacharia, a Thiruvananthapuram-based political commentator and writer, said that while “rhetoric" against the UPA and the Bharatiya Janata Party led-National Democratic (NDA) will come up at the meet, “self-retrospection" should have the priority.

“The party congress will be more like a reality check unless the leadership wants everybody to drive back a point home," he said. “The party needs to think what it is going to do about its own presence and survival in the Indian democracy and what its real presence is and contact with the people of India."