Jaitapur (Maharashtra):Tabrez Sagvekar, a fisherman of Sakhri Nate village near Jaitapur in Ratnagiri district of Maharashtra, has assumed the stature of a martyr.

On the afternoon of 18 April, 30-year-old Sagvekar was killed in police firing on people protesting the building of a nuclear power plant in the area.

Though Sagvekar fell to a bullet in the stomach, his death was collateral damage between local resistance to a proposed nuclear power plant and the government’s determination to overcome any hurdles in the process.

“My son’s death had added vigour to our resolve to fight against this project," says Tabrez’s father, Abdul Latif Sagvekar, his voice choking and with anger in his eyes. 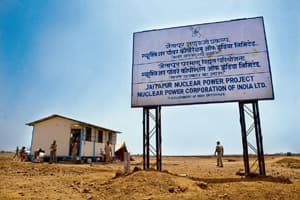 India proposes to build a 9,900MW nuclear power plant near Jaitapur on the west coast. The plant will be built by state-owned Nuclear Power Corp. of India Ltd. French multinational Areva SA has been awarded a contract to construct six reactors, each of 1,650MW capacity.

If and when fully commissioned, the Jaitapur plant will be the largest in the world, overtaking the current largest 8,200MW Kashiwazaki-Kariwa nuclear power plant in Japan.

The scenic village of Sakhri Nate, located barely 100m from the sea on the Konkan coast between the Western Ghats and the Arabian Sea, has around 10,000 residents. Most families earn around ₹ 200 a day, with the fishermen going to sea on boats owned by relatively wealthier people in the area. Abdul Latif doesn’t venture into the waters any more, and his son was the sole breadwinner of the family.

With Sagvekar’s death, the government has hit a roadblock in executing its plan at Jaitapur. Madhukar Gaikwad, district magistrate of Ratnagiri, admitted the firing had led to a breakdown in talks with the locals.

“Right now, our priority is to maintain law and order, but we will like to resume dialogue at the earliest," Gaikwad said. So far, the district administration has held some 60 meetings with the people of the area, including one held by Maharashtra chief minister Prithviraj Chavan, Gaikwad said.

Samir Sagvekar, Tabrez’s uncle, states that if the nuclear power plant at Jaitapur comes up, it would lead to the creation of a so-called red zone, or a portion of the sea near the plant where fishing would be barred owing to security reasons. “We will then have to go to the open sea for fishing where the catch is substantially less than the creek," Samir Sagvekar says.

Abdul Gadkari, another fisherman from Sakhri Nate, reasons that the hot water discharged into the sea from the cooling towers at the proposed plant would endanger marine life in the area due to a rise in temperature of the local water.

Even the more influential people of the area such as Majid Solkar, the owner of a couple of fishing boats, do not feel the need for such a project in the area. Sitting in his two-storey house that compares favourably with some of the better constructions in Mumbai, Solkar says he is not aware of the technical arguments against a nuclear power plant, but he is doing well enough without the development in the area that the proposed project promises.

Solkar catches fish worth ₹ 10,000-12,000 every day and has a new Maruti Suzuki Swift parked in the big compound of his house.

The government has announced a compensation of ₹ 10 lakh per acre to families whose land has been acquired for the 9,900MW power plant. The fishermen, however, are unlikely to receive any compensation as they do not own any land.

Even those whose land has been acquired are not willing to collect compensation cheques from the government under protest.

Milind Desai, a doctor who practices in Mithigavane village, had to unwillingly part with 53 acres for the project. Desai says that if the government wanted to develop the region, it should promote tourism, and establish cold storage chains and units to process mangoes and cashew.

Ratnagiri is famous for its orchards of Alphonso mangoes, which is exported to various countries. The hilly roads within the district are lined with mango trees and also have extensive cashew plantations.

“Even if we were to believe that the nuclear plant would not pose any direct threat to the mango orchards, do you think developed countries would like to buy mangoes from orchards near a power plant after what has happened in Japan?" Desai asks agitatedly. “We don’t want this kind of development that would endanger the future of our generations to come."

The need for development in Ratnagiri is imminent. According to the 2010-11 economic survey of Maharashtra, Ratnagiri is ranked 22nd in the human development index among 35 districts in the state. The neighbouring districts of Raigad and Sindhudurg rank much higher at sixth and ninth place.

The latest census data shows a fall of 4.96% in the district’s population, which is attributed to high rates of migration to cities such as Mumbai and Pune.

Manohar Dhuri, the village council head at Niveli village, states that the councils of the villages affected by the project had unanimously passed a resolution and informed the government that it did not want a hazardous project in the area.

“But the government has ignored our plea and this is in violation of the 73rd and 74th amendment to the Constitution that gives gram sabhas (village councils) the right to decide what kind of development they want in their villages," Dhuri says.

Though resistance to the proposed nuclear energy project at Jaitapur has been there since 2005, when it was first announced, it has magnified due to the accident at Fukushima.

An earthquake and subsequent tsunami that hit Japan on 11 March led to damage at the country’s nuclear power plant in Fukushima, which had to be shut down amid threats of radiation leaking into the atmosphere.

Opponents of nuclear power say that not only does the Fukushima incident raise doubts about the viability of a nuclear power plant, it will also make nuclear energy more expensive.

“The per-megawatt cost of nuclear energy is double of what thermal power costs in any case, and will get more expensive as the cost of insurance of such projects will rise in the light of Fukushima, further swelling up project cost," says Suresh Prabhu, former Union power minister and a critic of nuclear power.

The price of uranium, the major fuel for nuclear power, is also getting dearer as China and India embark on a massive nuclear power capacity addition programme, Prabhu says.

Critics of the proposed project at Jaitapur have also pointed out that the region falls in a seismic zone that poses a moderate risk of an earthquake.

Questions have also been raised about the technology utilized for nuclear reactors to be used at the site as design and cost concerns have emerged in France and Finland, where similar nuclear reactors are being constructed.

There are, however, some natives who are in favour of the project and call the protests motivated.

Raja Patwardhan is a chemical industry consultant based in Mumbai who hails from the Janshi village near Jaitapur. He gave up around 14,000 sq. ft of his land for the project.

Patwardhan says most people at the forefront of the agitation in the area are affluent and whose whose livelihood does not depend on the land they are parting with.

He also claimed that some landowners were more interested in selling their land at a much higher price—than the government compensation—to private companies looking to build hotels and resorts in the area and tap the tourism potential of the Konkan coast.

An attempt to create a consensus over the merits of the project also appears to be under way at Jaitapur. On Saturday afternoon, Bhalchandra Mungekar, a member of Parliament in the Upper House, or Rajya Sabha, and a former Planning Commission member, accompanied three clerics of mosques in the neighbourhood to the proposed plant site to offer a first-hand assessment of the project.

Mungekar later told Mint he would soon submit his assessment of the ground situation to Prime Minister Manmohan Singh, environment minister Jairam Ramesh and the chief minister of Maharashtra.

“I feel that both the government and the protesters need to give up extreme positions on the matter," Mungekar said. “The government has a responsibility to create an atmosphere which is conducive to dialogue, and make a serious and genuine effort to address all the concerns and apprehensions of the people."

Only 165 out of 2,365 villagers have so far accepted compensation cheques.

The events surrounding Jaitapur have also provided a battleground for regional politics. The controversial project has given the Shiv Sena, an opposition party in the state, a chance to flex its political muscle.

The road to Jaitapur is lined with large banners put out by the Shiv Sena telling people how the project should be shunned to avoid a Fukushima-like disaster.

The police firing in which Sagvekar was killed occurred nine days after Shiv Sena executive president Uddhav Thackeray held a public meeting in the area and pledged to continue the fight against the project.

Mint could not meet the local member of legislative assembly (MLA) from the Shiv Sena, Rajan Salvi, as he had been arrested a few days ago for leading the protest in the area and had not been granted bail till the weekend.

“If an advanced country like Japan, which is always on high alert for earthquakes and tsunamis, could not deal with the crisis effectively, what will we do?" asks Pramod Shere, a Shiv Sena leader based in Ratnagiri town. “This is just the beginning. The protests will intensify."

Political analysts read the situation as being an attempt by the Shiv Sena to regain its hold in Ratnagiri, which loosened upon the exit of local strongman Narayan Rane from the party.

Rane joined the Congress party and is now the state’s industries minister. He has come out in support of the Jaitapur project. After Rane left in 2005, the number of MLAs the Shiv Sena had in the region fell to four in 2009 from 14 in 2004.

“Had Rane not expressed his support, the Sena may have just staged a token protest and left the matter there, but it has become a prestige issue now," said Kumar Ketkar, a political commentator who tracks Maharashtra politics closely.

The Shiv Sena had supported the Union government in its move to get the India-US civil nuclear deal passed in Parliament and termed the opposition of the Left parties to the deal as being anti-national. “We cannot say goodbye to nuclear plants in the country," environment minister Ramesh said on Saturday.

On Tuesday, Ramesh said the government would install stand-alone safety systems while building the Jaitapur plant.

On Tuesday, Ramesh said the government would install stand-alone safety systems while building the Jaitapur plant.