Thanks for Visiting Mint
You seem to have an Ad Blocker on. Please turn it off in order to continue, or whitelist Mint
HOW TO TURN OFF AD BLOCKER
OR
REFRESH IF YOU ALREADY TURNED OFF THE AD BLOCKER
Home >Industry >Agriculture >Modi govt plans bold move to fix rural distress

New Delhi: The central government, in consultation with states, proposes to launch a new price support scheme for farmers to prevent distress sales at prices below the minimum support price (MSP).

Under the proposed “market assurance scheme", states will be free to procure all crops from farmers for which MSPs are announced, except rice and wheat, which are already being procured by the centre for the public distribution system. 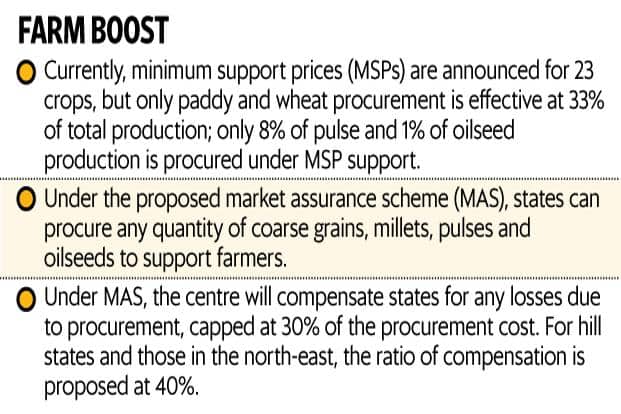 Under the new scheme, the centre will compensate states for any losses capped at 30% of the procurement cost. It will be the states’ responsibility to dispose of the procured crops.

The proposed scheme will ensure an assured price for the farmer, mitigating the price risks faced by farmers after harvest. Together with a prolonged spell of inadequate rains and two years of drought it has contributed towards rural distress.

If successful, it will also politically benefit the Bharatiya Janata Party (BJP)-led National Democratic Alliance (NDA), though it could place fiscal pressures on the Union government; in the just-concluded assembly election in Gujarat, one reason contributing to the BJP’s less than usual performance was farmer angst triggered by rural distress.

The system, as it exists now, under which only rice, wheat and small quantities of pulses and oilseeds are procured by the centre, “leaves much to be desired", according to a copy of the proposal reviewed by Mint. The new scheme “proposes to strengthen the procurement mechanism to ensure that farmers do not suffer from marketing inefficiencies, as commonly reflected in the prices ruling lower than notified MSP for many commodities", it said.

States will take ownership of the scheme, including which crop to procure and in what quantities, when wholesale prices drop below MSPs. State governments will be free to use the procured crops for targeted nutrition-support programmes such as mid-day meals for schoolchildren, or sell them in the open market.

“We have written to states to elicit their opinion on the scheme, and if they are interested we will launch the scheme," said a senior official at the agriculture ministry who declined to be named. According to this official, the letter to states was sent more than a month ago.

The proposed scheme comes against the backdrop of a record harvest of cereals and pulses in 2016-17, which led to wholesale prices plunging below MSPs. The price crash has led to protests by farmer groups across the country since June, with demands for remunerative crop prices and loan waivers. While states such as Uttar Pradesh, Maharashtra, Punjab and Karnataka have announced farm loan waivers that are at different stages of implementation, states like Madhya Pradesh have launched their own price support schemes for farmers growing pulses and oilseeds.

Experts welcomed the move, but cautioned that it was at best a stopgap measure and that the eventual solution was to bring in greater competition in agricultural markets by dismantling existing cartels.

“While any intervention and attention to agriculture marketing is welcome, we must await full details of the scheme to make any specific comments," said Pravesh Sharma, farm expert and a visiting fellow at the Indian Council for Research on International Economic Relations. “However, it can be generally observed that government does not seem to risk spending political capital to directly take on poorly functioning agriculture markets, where lack of competition, cartelization and opaque price discovery are the root causes of price distortions."

“Spending public money may be necessary in some instances, but the larger goal of reforming agricultural markets should not be lost sight of," he added.