A ministerial panel has recommended changes in the GST composition scheme, which, if accepted by the GST Council, will benefit millions of SMEs

New Delhi: A ministerial panel has recommended lowering the goods and services tax (GST) rates for small businesses and extending the benefit to more such units in an attempt to reduce their tax burden and improve compliance.

If accepted by the GST Council at its 9-10 November meeting, the changes in the so-called composition scheme could benefit millions of small enterprises, eateries and traders. 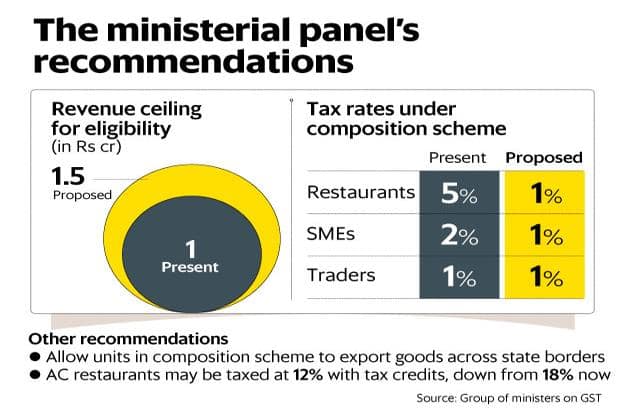 The changes could also reduce some of the angst over GST, the political ballast of which is being felt by the ruling Bharatiya Janata Party. The GST Council has been working on encouraging the informal segment of the economy, which is dependent on cash transactions, to come under the tax net without burdening them.

In a meeting on Sunday, the ministerial panel recommended a new tax rate under the composition scheme would be 1% for traders, manufacturers and restaurants, Himanta Biswa Sarma, the convener of the ministerial panel, told reporters after the meeting. It was previously 1%, 2% and 5%, respectively.

The panel also recommended increasing the ceiling for eligibility to enterprises with annual revenue of less than Rs1.5 crore from Rs1 crore currently. The GST Council had on 6 October decided to raise the ceiling to the current level from Rs75 lakh and also extended the deadline for signing up for the scheme to 31 March 2018.

A GST council official said that the ministerial panel has recommended the GST Council let small traders pay either 1% on their revenue of taxable items (loose rice, pulses, etc., are exempt from GST) or 0.5% tax on total turnover.

“In the latter case, central and state governments will get a quarter of a percent of tax each. The idea is to make the system simple," said Punjab finance minister Badal.

Sarma said that on one issue—allowing enterprises in the composition scheme to avail of input tax credits on business-to-business transactions—the panel could not reach a consensus and that this matter will be referred back to the GST Council.

The panel also favoured allowing those covered under the composition scheme to supply goods across state borders.

The composition scheme was envisaged for small businesses and held the promise of a flat rate and easy compliance. Around 1.5 million small businesses have signed up for it so far, a fraction of the 8.9 million registered GST tax assesses.

It was clear that the scheme needed to be made more attractive and that just the flat rate and the easy compliance (summary returns every quarter) were not drawing enough assessees.

Over the past few sittings, the GST Council has sought to address teething troubles and implementation issues surrounding the new unified indirect tax regime that India adopted on 1 July. In early October, for instance, it slashed rates on 27 items, allowed businesses with revenue of up to Rs1.5 crore to file returns every quarter (instead of every month), recommended the creation of a ministerial group to review the tax on AC restaurants and announced sops for exporters.

More changes could be in the offing, especially in terms of specific tax rates. Revenue secretary Hasmukh Adhia said in a 22 October interview to PTI that the government was considering easing the compliance burden on small and medium enterprises: “There is a need for harmonization of items chapter-wise and wherever we find there is a big burden on small and medium businesses and on the common man, if we bring it down, there will be better compliance."