“Our employees are the biggest strength of the company and the change agents for the community," Maruti Suzuki India Ltd says in its annual 2011 report.

That sentiment hasn’t prevented production from being disrupted over the past few months by labour strife—and as output has slumped, so has the company’s stock, mainly because Maruti has been unable to take advantage of the traditional bump in demand during the festival season. Not good news at a time when sales have been slowing across the board amid gathering economic gloom.

The strike ended on 21 October amid a truce between the company and the unions overseen by the government of Haryana—the company’s two plants are based in the state. The truce is holding for now. 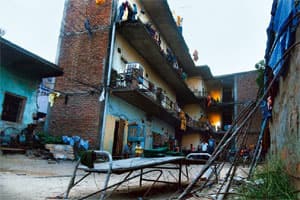 There’s a story behind the name. It used to be called Daulatpur Nasirabad before the 39th president of the US came calling in 1978. Jimmy Carter was looking for the area in which his mother Lillian had worked as a nursing volunteer in the 1960s. A name change seemed propitious.

“We thought the renaming of the village will change our fortunes but Gurgaon became a city and we stayed where we were," says Attar Singh, a resident of Carterpuri, now in his late 60s.

Carterpuri is a low-lying area that gets flooded with sewage from the private colonies around it. Flies and an overpowering stench of open drains hangs in the air.

The story of Carterpuri and Maruti is, in some ways, the story of Gurgaon, characterized by a deep split. Physically, the two territories are roughly separated by NH 8 running down the middle—on the one side is new Gurgaon with its malls, Metro and gated communities. On the other is old Gurgaon with its congestion, railway station and tenements.

Maruti is a massive presence in old Gurgaon, located on what used to be the old highway. On both sides, there is a near complete abdication of government responsibility—for roads, sanitation, power supply. While the private colonies of the newer Gurgaon make up for this by paying for alternative sources of essential services, those who can’t afford it, like the people of Carterpuri, just have to endure it.

Ironically, while part of Maruti’s corporate social responsibility (CSR) initiatives involve welfare programmes in and around areas close to its plants, Carterpuri has never figured in them.

“We have adopted four-five villages in Manesar where we try to improve the living conditions," says a company spokesperson. “Our workers may be living there as the village (Carterpuri) is in the vicinity of our plant but living conditions in that village never came to our notice."

The company’s CSR philosophy, which its employees are expected to practice, is clearly stated in the annual report. “Contributing their time and knowledge for the benefit of the underprivileged gives them a sense of fulfilment and adds meaning," says the spokesman. “The company considers the local community an important stakeholder."

When the company, then called Maruti Udyog Ltd, started producing cars at the Gurgaon plant in 1984, the inhabitants of Carterpuri had hoped some of the benefits of increased economic activity would rub off on them.

But “even Maruti setting up its first plant next to the village did not help its cause", says Deepchand Yadav, an 82-year-old resident and retired policeman.

There are also murmurs about the caste politics in Haryana putting paid to Carterpuri’s aspirations, although no one wants to talk openly about this.

Dig a little deeper and the sense of alienation is apparent.

“We hardly go to the malls. It makes us feel low, it’s frustrating," says 24-year-old Dharminder Singh, a contract worker at Maruti and a resident of Carterpuri. “When you earn ₹ 6,700 a month, you cannot eat out, visit malls and, of course, feel on a par with others."

Maruti’s workers say that while production has risen over the past two years, their salaries haven’t.

Prabhat Chaturvedi, a retired labour secretary with the Union government, says companies in the Gurgaon-Manesar belt need to pay more attention to workers and their welfare. “The whole problem (of labour unrest) is because big corporates are not humble," he says.

That finds its echoes in Carterpuri, which its residents often refer to as Quarterpuri, given the number of Maruti employees in the place.

“Nobody from the company comes here," says Mohan Thapa, a Nepalese migrant who works at Maruti’s Gurgaon factory and lives in Carterpuri. “Please don’t ask us what the company has done here."