Washington: President Barack Obama urged Republican lawmakers on Saturday to spell out exactly what they can and cannot support in his $447 billion plan to create jobs, saying it was “time for Congress to get its act together." 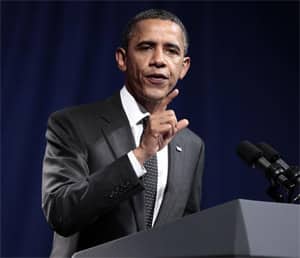 Republicans oppose those ideas, along with some of Obama’s fellow Democrats. But Republican leaders, wary of being cast as foes of job creation during tough economic times, have said there are some elements of the plan worth considering.

“Some Republicans in Congress have said that they agree with certain parts of this jobs bill. If so, it’s time for them to tell me what those proposals are," Obama said in his weekly radio address. “And if they’re opposed to this jobs bill, I’d like to know what exactly they’re against."

Democrat Harry Reid, the Senate majority leader, has said he will bring up the bill for consideration this year, but it is not clear when in a climate of discord in Washington.

Obama sent his plan - a mix of infrastructure projects and other stimulus spending plus tax relief for small businesses and workers - to Congress three weeks ago.

The president, who pushed through an $800 billion economic stimulus bill in 2009, has criticized Republicans for standing in the way of his initiatives at almost every turn. Republicans retort that Obama’s spending and regulatory policies have slowed the economic recovery and job creation.

“This jobs bill contains the kinds of proposals that Democrats and Republicans have supported in the past," Obama said in his address. “It is time for Congress to get its act together and pass this jobs bill so I can sign it into law."

Democrats in the Senate are looking at ways to pay for the jobs program beyond just raising taxes on the rich, lawmakers said on Friday.

No decisions have been made, Democratic aides said, but they acknowledged the alternatives may include other tax hikes or savings through spending cuts.