The NCAER survey puts Jharkhand at the bottom of the list, below Uttar Pradesh and Bihar

New Delhi: Businesses ranked Gujarat, Delhi and Tamil Nadu as the top three states for making new investments and corruption emerged as the biggest concern for investors, according to a survey by New Delhi-based think tank National Council of Applied Economic Research (NCAER).

A ranking based on the success rate of states in implementing 98 regulatory reforms by the department of industrial policy and promotion (DIPP) in September last year ranked Gujarat, Andhra Pradesh and Jharkhand as the top three performers.

Interestingly, the NCAER survey puts Jharkhand at the bottom of the list, below Uttar Pradesh and Bihar.

The first report of the NCAER State Investment Potential Index (N-SIPI) is based on five pillars—labour, infrastructure, economic climate, political stability and governance, and perception of a good business climate. The survey was carried out across 20 states and the Union territory of Delhi.

Shekhar Shah, director general, NCAER, said N-SIPI seeks to bridge the many information gaps surrounding questions of what, how much and where to invest. 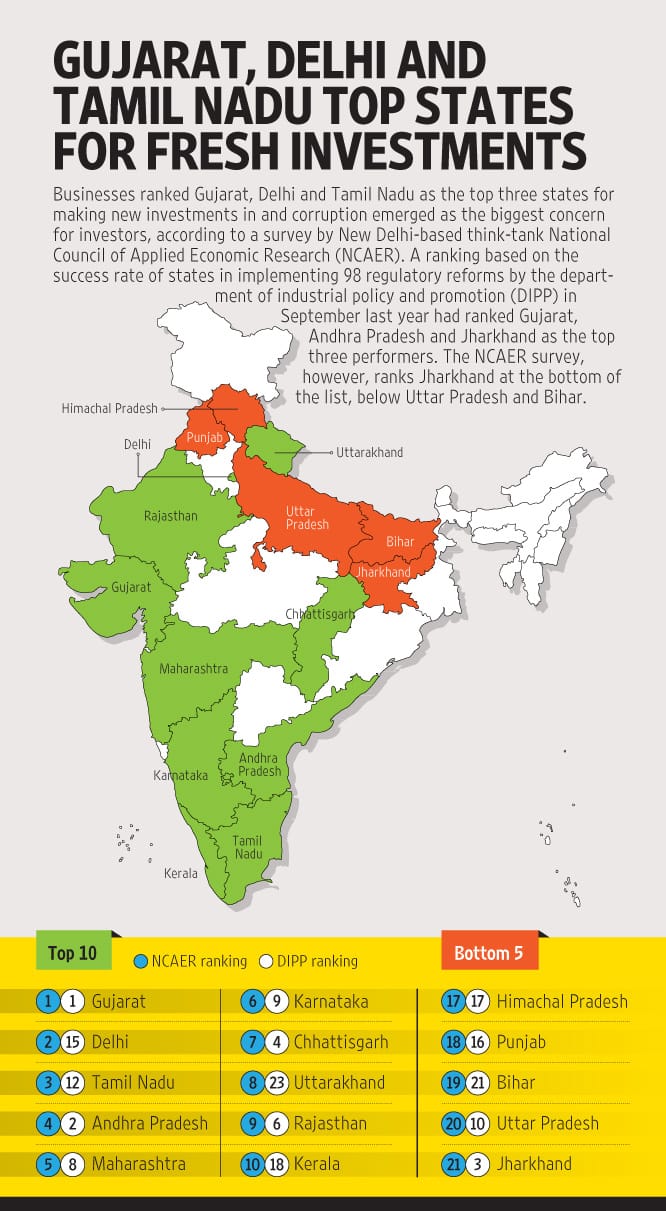 “It provides an entry point in thinking about new investment for domestic and overseas firms and encouraging a more competitive ethos among India’s states," he added.

At a disaggregated level, Kerala, Tamil Nadu and Karnataka top the list under the “labour" pillar. In the “infrastructure" pillar, Delhi is ranked as the best place followed by Punjab and Gujarat. In terms of “economic climate", Delhi comes out on top again, and is closely followed by Andhra Pradesh and Maharashtra.

In the “governance and political stability" pillar, Gujarat tops the ranking followed by Tamil Nadu and Madhya Pradesh. In the fifth pillar regarding “perception of a good business climate", Gujarat again tops the list followed by Rajasthan and Chhattisgarh.

The ranking on “perception of a good business climate" also asks about the key constraints to doing business. Corruption (79.2%) ranks at the top among 22 parameters, followed by getting approval before starting business and getting environment clearance. Industries ranked Uttarakhand (32.5%) as the least corrupt state and Tamil Nadu as the most corrupt with 100% of the survey participants voting against it. The bottom three parameters where industries have least concerns are availability of unskilled labour, availability of water and labour relations.

DIPP secretary Ramesh Abhishek, speaking at the report’s launch, said the results are quite different from its own report on implementation of business reforms by states. “In the beginning it was of some concern to us before we got down to the details of what this study is all about because we thought it may send some diverse messages to various potential investors. But the two studies and the contents are so different that they supplement each other nicely," he said.

Abhishek said the findings of the report clearly underline the reforms DIPP has been proposing to the state governments. “Corruption, delay in approvals before starting a business and getting environmental clearance have been cited as the top three constraints in the report. These are exactly the areas that DIPP wishes to address as part of our ease of doing business initiative," he added.

The Narendra Modi government’s focus on improving the business climate, both at the centre and state level, is an important component of his Make in India initiative to turn India into a manufacturing superpower.

His aim is to improve the overall business environment in the country to move up in the World Bank’s Doing Business rankings, by creating a competitive atmosphere among states.

The move is also expected to encourage states to carry out reforms in areas such as land acquisition and labour laws, where the Modi government has found it difficult to make legislative headway.

This year, India’s Doing Business ranking improved by four notches to 130 under a revised methodology. The NITI Aayog is also preparing to conduct a nationwide “enterprise survey of business regulatory environment" of around 3,000 units, including 500 start-ups, later this year to assess the perception of enterprises on the ease of doing business initiatives taken by the state governments.