Germany to decide on firewall in March: Schaeuble

Germany to decide on firewall in March: Schaeuble

Mexico City: The German government will decide whether to boost the European bailout fund in March and its parliament is very likely to support any decision for more resources, finance minister Wolfgang Schaeuble said on Saturday. 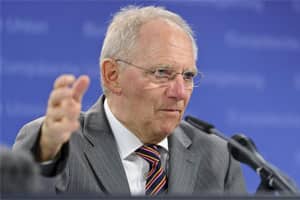 “For all of these decisions the German government has made in this context, it’s got the necessary approval in the German Bundestag," Schaeuble told a news conference in Mexico City, referring to the country’s lower house of parliament.

“And so you can definitely assume that if the German government makes these decisions it will get the necessary approval for them in the German Bundestag," he said at a meeting of finance officials from the Group of 20 economic powers.

G20 officials in Mexico City have urged Germany to back a plan for Europe to increase its rescue fund, which could pave the way for other G20 nations to contribute extra money to the resources on hand at the International Monetary Fund.

Schaeuble noted that Germany’s decision would come before top finance officials meet again at the IMF in April.

“And it’s going to be in time for the IMF to be able to make a corresponding decision at the spring meeting in Washington on the firewall," he said.

But advocates of a bigger firewall say more resources are needed to send out a clear signal to markets that the bloc will do whatever is necessary to defend the euro currency.

The plan is to merge Europe’s temporary and permanent bailout funds, the European Financial Stability Fund and the European Stability Mechanism, to create one €750 billion ($1 trillion) fund.

Once Europe has enlarged its bailout fund, other countries have said they will bolster the IMF’s resources.

Schaeuble was speaking not long before the German parliament was due to vote on Monday on whether to endorse a new €130 billion ($175 billion) bailout package for Greece, which has been at the heart of the euro zone crisis.

The minister said he expected the Bundestag to give its approval to the second Greek package.

“There is no diverging view that we’re on the right path with our stability measures," Schaeuble said.

Separately, Jens Weidmann, the president of the German central bank, the Bundesbank, said the economic outlook had improved lately after a weak phase last year.

This meant there was a chance the IMF’s “relatively pessimistic" forecasts could be surpassed, he added.