Mumbai: In a statement that took his former teammates by surprise, Anna Hazare on Thursday said there was no need to form a party or contest elections but instead work for an “alternative". 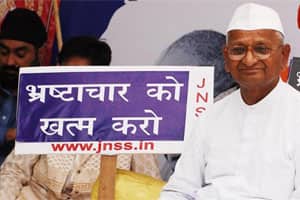 Sources in Arvind Kejriwal-led India Against Corruption (IAC) said there was nothing new in his statement as he has been maintaining that he will not join any party or contest elections.

Last month, Hazare disbanded his team after calling off a fast in Delhi during which his team decided to take the political plunge. Announcing his action plan in fighting corruption, he appealed to the youth to ensure a 90-plus per cent voting in the elections. In the appeal, aimed mainly at anti-corruption activists in Maharashtra, he said, “to change the state and the country and get a corruption-free India, we have to send men of character to Assembly and Lok Sabha and not look at the party."

After next two months, he said, he would be in a country-wide tour visiting every state in the next one and half years to educate and create awareness among people. He said, “I don’t know how much I would succeed. If I am defeated, it will not be my defeat, but of the people because Anna Hazare is fighting for the cause of the people."