Changing approach to dealing with rape

Changing approach to dealing with rape

New Delhi: The young girl, visibly bruised and shaken, was brought for questioning amid blaring sirens and numerous cops stirred by her sudden appearance. She was reporting a rape on a summer day in 2001 in a police station in central Delhi, where the policemen struggled to make sense of her distress.

In an instant, they went hurling questions at the girl; but she wouldn’t stop sobbing. Their questions to her were intimate and rattling—details on the rape, reconstruction of events leading to the crime, finding witnesses and identifying the accused. Rajat Mitra watched the proceedings with unease. A trained clinical psychologist, he was at the police station in connection with a case at Sanjeevani, a non-governmental organization (NGO) for mentally disturbed people, where he worked; but what he saw that day was to lead him to an unusual career.

“The whole attitude (of the police) affected me deeply. The family needed emotional support and not someone yelling at them. I came back home and talked to my family about it. I began thinking very deeply about the lack of counselling services for rape victims," Mitra recalls.

There, according to Mitra, the police’s method of questioning was weakening the case. “A rape affects the victim’s memory and perception, and when dealt with roughly, it can just emotionally wreck her. That’s where a psychologist is needed," he reasons.

This is what he told Delhi’s then commissioner of police, Ajay Raj Sharma, two weeks after the incident.

Mitra hadn’t imagined a life dedicated to picking threads of crime from psychological enquiries into pain, but what he proposed to the commissioner meant the same: his services as a dedicated rape counsellor for the Delhi Police.

His proposal that police refer rape cases to him for counselling, the first such initiative ever considered by the police in India, was approved the same year, though on an experimental basis.

In the years since, Mitra, a trained clinical psychologist from Delhi University and who has a doctorate from the University of New Orleans, Louisiana, has counselled nearly 7,000 rape victims; but, unlike before, he is no more alone in this endeavour.

In a reflection of growing sensitivity in the handling of rape cases in India, a new crop of rape counsellors is now increasingly working with the police to not just counsel victims, but also to help the police gather vital clues about the crime— a trend encouraged by an explosion in women’s rights movements demanding more humane laws to minimize victims’ humiliation in cases of sexual assault.

While the Delhi police engages with Swanchetan to counsel rape victims, the Mumbai police has been engaging with Sehat, an NGO, and a few hospitals in recent years.

In Chennai, the city police has formed a separate cell to deal with rape cases and also work closely with NGO Tulir, which works exclusively for child victims of sexual abuse. In smaller cities, rape activists say the word on counselling is still to reach the local police, though rape continues to be a prominent crime with cities such as Bhopal, Jabalpur, Jaipur and Pune reporting the crime in large numbers (see box). 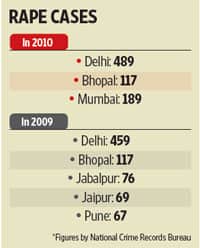 Typically, when they begin, no one is allowed in the counselling room, not even the police, and sessions run into hours. “There are certain strict no’s during counselling: don’t probe, don’t go deep without permission, don’t ask deeply personal and leading questions," says Pubalin Dash, a 31-year-old counsellor based in Delhi, adding that the victim’s version, as gathered after hours of patient counselling, requires a confident submission in court to be accepted.

While the provision of counselling is yet to go a long way in India’s criminal justice system, it’s already making substantial contributions in helping victims report the crime and get over the emotional trauma.

Dash recalls an incident where the lawyer defending the offender argued that the rape was consensual since the woman who claimed to have been raped had undressed as the rapist so desired. “Rape victims don’t shout. They freeze. Research shows 80% of rape victims freeze during rape. During rape, a woman shows passive resistance, and only a counsellor can convince the court about it," says Dash.

In another case, Vidya Reddy, a health professional with Chennai-based Tulir, recalls a gangrape victim breaking into a giggle in court as the defence lawyer asked a range of embarrassing questions. “The lawyer argued that because she giggled, she must have consented. Rape trauma may shock or make one hysterical, but this aspect is often overlooked by the police," she says.

In many difficult cases, rape counsellors are not just gathering victims’ versions, but also testifying in courts to nail offenders. “In one of the first cases where a psychologist was asked to submit a statement, Mitra informed the court, using scientific parameters, that the child showed all the symptoms of trauma that a victim of rape would, thereby corroborating the victim’s testimony. The court received this very well," says lawyer Nandita Rao, who has handled several rape cases in Delhi.

Mitra, so far, has testified in a hundred rape cases in Delhi, a far cry from the days when the courts would simply treat counsellors to cross-examination. Justice V.S. Malimath, who recommended counselling for rape victims in his report on reforms for the Indian criminal justice system, says that while testimony is viewed with great care and caution, “courts do accept it provided the counsellor is experienced and certified".

“Courts have now started realizing the importance of rape counsellors vis-à-vis psyche of a woman. Earlier, courts had no such patience," he says.

In a first where a Delhi court accepted the testimony of a rape counsellor, Swanchetan’s counsellors helped the police corroborate evidence against an offender.

In another rape case—of a mute girl—the rape counsellors helped police nab the offender by interpreting the gestures made by the victim.

The involvement of counsellors, already an established norm in rape cases in the West, is more evident in India’s metros such as New Delhi and Mumbai, where rape continues to be perpetrated with impunity. In 2010, Delhi accounted for nearly one-fourth of the total rape cases in India. “I have seen the largest number of sexual assault cases in Delhi in the last 10 years without exception," Mitra says.

Each of the rape cases, activists argue, particularly in urban centres, reflects an explosive clash between the rapidly modernizing cities and the patriarchal societal structures that continue to view women as the weaker sex.

The victims are mostly young, apparently vulnerable, from lower income groups, and, in many cases, known to offenders. In 2009, for example, 94.9% involved offenders were known to the victims, according to the National Crime Records Bureau.

And while a vast majority of rapes still go unreported due to the stigma attached with the crime, rape counsellors have also helped survivors report it with the police. “A girl from a Muslim family was brought to New Friends’ Colony police station bleeding. We saw signs of sexual abuse, but the child was afraid to testify against her father. She finally opened up; and for four years, our counsellors fought the case," says Nidhi Mitra, another rape counsellor at Swanchetan.

The beginning for the rape counsellors—both with the police and the courts—however, wasn’t easy. When Mitra began his association with the Delhi police in 2002, he was already cautioned: the police may not cooperate. And it didn’t.

For the first six months, he got no cases to handle as the cops didn’t refer any. “When the cases slowly started coming in and we began appearing in courts, defence lawyers would often question why we (counsellors) were included when there was no provision for the same in the criminal laws of the country. One defence lawyer once told me: ‘Why do you come in courts? You should stay in hospitals’," recalls Mitra, adding that the response from lawyers still needs improvement.

However, with courts being more forthcoming with rape counselling, a fresh problem has arisen. “Police are now sometimes hurrying to get any counsellor, and that’s a problem. Counselling is an important area which still needs more training, sensitivity, better techniques and capacity building," says Malimath.

Then there are other challenges, such as the lack of evidence in rape since it’s a private crime, and, often, weird responses from victims. “One victim once said about the offender: ‘He loves me enough to rape me.’ Now, how do you explain that?" asks Dash, citing examples from the West, where rape survivors would talk of violation during counselling as opposed to women in India who would talk about the way in which rape has lowered their worth.

“Here, survivor feels like passive already; so I use the active voice: ‘He raped you,’" says Mitra. Yet, despite all the efforts, the conviction rate in rape cases remains dismal. Of 21,397 cases in 2009, chargesheets were filed in 94% of cases; but the conviction rate remained a dismal 26.9%. Yet, “many survivors still call us up when they are getting married/settling down in a job, or when they read about rape cases and are disturbed", Mitra says. “Counselling brings awareness that deep injustice, deficiencies in law, patriarchal bias exist that cause sexual assaults."