New Delhi: The Union ministry of rural development plans to engage the private sector in a scheme that aims to provide services such as sanitation, water supply and sewerage facilities in villages, an official said. The ministry, said the official, who did not want to be identified, is working on a plan which will allow private firms to avail of Central allocations for the Providing Urban Amenities in Rural Areas (Pura) scheme launched in 2005.

The firms could then be reimbursed through a mix of annual payments made by the government and upfront grants, which could be as high as the full cost of a project, he said. 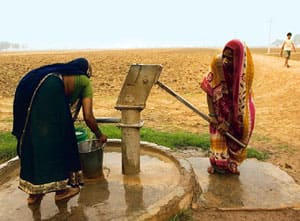 Tough times: Women draw water in Chandauli village, UP. The scheme, started in 2005, was meant to improve amenities in villages. Harikrishna Katragadda / Mint

Pura was originally meant to provide amenities such as sewerage and sanitation facilities that would improve the quality of life in villages. Conceived by former president A.P.J. Abdul Kalam, it quickly morphed into an employment generation exercise rather than providing services, the official noted.

He said one major reason for migration to urban areas was because the government rarely addressed “quality of life issues in rural areas". He said the government intends to bundle several amenities as one project that will then be financed partly by it through existing allocations and partly by the private sector with the panchayat or village councils holding concessions.

Under current government rules, the Union and state governments can together provide as much as 40% of the cost of projects to subsidize infrastructure projects by private companies. The ministry will conduct pilot studies in 8-10 villages with basic levels of development after which the plan could be rolled across the country, the official said.

“The important thing is the size of the regions you are looking at," said Vinayak Chatterjee, chairman and managing director of project management consultancy Feedback Ventures Pvt. Ltd. “You can’t get a corporate interested in a few villages. You will have to take a much wider swathe, say three or four districts, for (companies) to be interested."